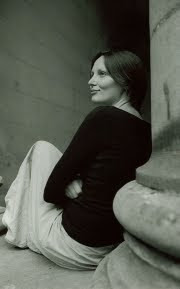 A poetic “late-bloomer,” Eva Cox began writing poetry just prior to her thirtieth birthday in 1999, and made her poetic debut later that year as a performance poet. After several performances, she entered Flanders’ first poetry slam competition, which she won hands down. Cox writes rattle rhymes and verses that work well on stage, and creates an alienating atmosphere in more carefully written, delicate texts.
Cox’s first poetry collection Pritt.stift.lippe. (2004) was nominated for the C. Buddingh’ prize and the Flemish debut Prize and awarded with the highest stipendium for a literary debut by the Flemish Literature Fund. With this volume, she also won the Literature Prize of the Province of East Flanders in 2008. With only twenty published poems to her name, Cox established herself as a new, long-awaited voice in Flemish poetry. She was the first woman poet in decades to surprise critics and readers.
The Dutch critic and fellow-poet Ilja Leonard Pfeijffer wrote about her: “Eva Cox writes poems like girls with eyes like pinball machines, ( . . . ) a voice like a flapping flag, a mineshaft in her throat( . . . ) Read this aloud and burn your throat. This is tough poetry.”
In 2009 Cox published her successful second collection Een twee drie ten dans (One two three let’s dance) with the noted Bezige Bij publishing house. In 2008 she won the Literature Prize from the province of East Flanders.

There’s a mineshaft in my throat

I hew at it with short fierce strokes

One day she was sitting at table. She smelt odd and I didn’t know her. She sat there like a young cuckoo with her elbows wide and forced me aside. The others were talking. No one spoke her name, nor did I know what she was called, in other houses, at other tables. Her ear was pointed and like a pink frown. Her teeth grey glass. Didn’t she see me? She leaned aside as if I had already left. Shoulder against my chin. Sleeve in my dinner. I didn’t speak. Sitting next to me she filled the room with the icicles of her frosty voice and drove me deeper into my chair

I’m covered in tiny mirrors.
I dance around like a beach ball.
I can be dazzling.

Those who run away from me, chase themselves off.

I am covered in tiny mirrors.
The edges cut into my own flesh.

I am:
a glistening mosaic
with soft red folds and
a heart of snow-white —


A pool of earth billows and steams in the summer sun.

Tombstones, flat slow barges, sail past me,
the cross a crooked mast.
There’s no wind, it is the sandy ground itself
that inches its way forward.
Where is the journey headed for, I want to ask.

Sitting on the quay wall on this strange Sunday afternoon
I see them disappear one by one.
They tilt over the edge of my vision
into the vortex of an hour-glass perhaps.


She dreams herself a chair,
rope round the ankles,
metal of a barrel in the neck.
But nothing compels.
Nothing that wrings words from her fingers.
The wrists tied to pans and buckets,
the mouth to a mouth, the heart to two dolls.
In the distance the pen.
Splinter in the yellow lamplight of the room.
Between herself and life out there a web of voices
that stops her. Like a crazed ball.

When a hand thrust out of the cupboard, not insistent, in fact even
shy, slowly turning over in the pale light, I pulled up a chair and had to
sit down. I reflected on existence, its rhythm, its unspirited limpness,
and decided not to slap the hand away. Since then, I’ve shared my
time, my cupboard and my emptiness, and it’s true that for the first
time and almost to my regret I’m dependent now but, still, I’m
relieved that it’s a hand and not a tongue, thank God not a tongue, or
a nose, what noses can start, how one covered in rags has to chase
them, no a hand, empty hand, smooth, shy, slowly turning over slowly
in the harsh light, to the rhythm of the sun and some hours.


—Translated from the Dutch by Gwyneth Lewis

a city for my birthday
with people houses and a square
and a pond with a pig of stone
a small pear tree full of blackbirds
and men I want the hunks with cases
on their shoulders old boots
and girls in hats with rabbit fur
and hard lashes and sweetened lips
and dots I want instead of stripes
no, zebra crossings are so thin
you see their ribs through tarmac
and letterboxes I don't want nor rain
I just can’t bear rubbish bins
nor babies smelling powdery and sad
no, not even babies, pale and bald

—Translated from the Dutch by Gwyneth Lewis

A CITY IS A SLUICE

A few moments later dense columns of smoke
Came from the Henirëtta once again.
—Jules Verne


Henriëtta sticks her head out of an attic window:

“A house is not a safe without a key! No roof shall become a bag over my head!

A house is still a street with four walls! You blow there! Right through it!

A city is a house with many holes!”

Henriëtta spits out a cherry stone:

Henriëtta fluffs up a pillow:

“Push a child into some sand and it will grow there.

Sew a shoe into a belly and it will sleep there.

The sea won’t swim away.”

“A bicycle is a fish. A car a slide. A city is still a train that stands still for a long time.”

______
“There’s a mineshaft in my throat,” “Intruder,” “Mirage,” “She Dream’s herself a chair,” “Hand,” “I Want,” “A City is a Sluice”
Reprinted from Pritt.stift.lippe. ©2004 by Eva Cox. Reprinted by permission of Uitgeverij Holland.
English language copyrights (c) by Judith Wilkinson and Gwenyth Lewis as noted.
Posted by Douglas Messerli at 7:42 AM