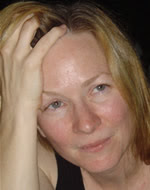 Born on an American air base in Japan, Elizabeth Cross spent most of her childhood in Biloxi, Mississippi and in the former West Germany. She earned an undergraduate degree in Political Science from Hope College and a Ph.D. in Literature/Creative Writing from the University of Denver. She taught at the University of Denver and at the University of Michigan before arriving at the School at the Art Institute of Chicago where she currently teaches in the M.F.A. writing program.
Awards include grants from the Michigan Council for the Arts and the Rocky Mountain Women’s Institute. Her visual poetry has been exhibited in Denver at the Red Shift Art Gallery, the Jewish Community Center, and the Outdoor Museum of Art. In Fort Collins, Colorado, her work appeared at One West Gallery. Publications include American Letters & Commentary, Chain, Chicago Review, and Denver Quarterly.
Cross’s work obsesses over definitions, accumulated research, multiple texts, and the formal devices she invents to explore them. Each poem is (in)formed differently in the process of this accumulation, and as a result, each often looks completely different from another. They do, however, tend toward a few basic questions such as what can language do? What is love? and What is it that generates meaning in our lives both emotionally and intellectually? Since these questions are infinitely unanswerable, the different constructions of the poems becomes a way to keep coming back to those questions, to try again and again to find new answers or possibilities.


Gone out the open window I am deceived by things I counted on
rifled by an evening of needles.
The vial emitting sparks now left behind, sucked dry.
Clean is a new hiding a partial erasing of your sound in the floor,
in the vent, on the brand new telephone line,
the message you leave in the garbage to threaten my life.

Around the furnace a ticking under the shouting
above the hidden gun speeding for gain
loss of my eyes on you through the window
faster depredation and pattern in the neighborhood.