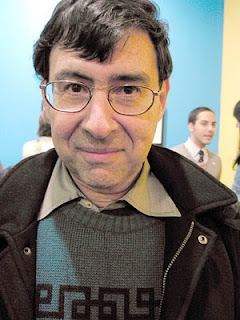 Born in Newark, New Jersey in 1947, David Shapiro attended Columbia University from 1964-1968, receiving a Merrill Fellowship to study in the United Kingdom, France and Italy during his junior year. Upon graduation he became a Kellet Fellow at Cambridge University in England.
Throughout the 1960s, Shapiro published in numerous literary magazines, receiving numerous literary awards and fellowships including the Gotham Book Mart Award (1962), New York Poets Foundation award (1967), and the Book-of-the-Month Club Fellowship (1968). In 1970 he and Ron Padgett edited An Anthology of New York Poets, which helped to define that group in its early poetic activities.
More recently, Shapiro has written several books on art and poetry, including a monograph on the poet John Ashbery and on the artist Jim Dine.
In 1977 he was a recipient of the American Academy and Institute of Arts and Letters Morton Dauwen Zabel Award. He has also received fellowships from the National Endowment for the Arts and the National Endowment for the Humanities.
Shapiro has taught literature at Columbia University and Brooklyn College and has taught art history and aesthetics at William Paterson College, the Cooper Union, and Princeton University.


Song for an Envelope

in a wall house of