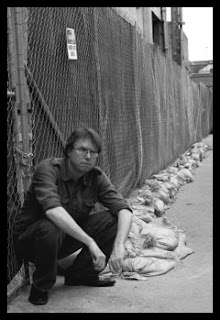 Born and raised in Southern California, Christopher Reiner’s father was a real estate agent and his mother sold cosmetics. He received his Bachelor’s degree from Sonoma State University, and became involved in the Drift Group of experimental filmmakers. Among his films and videos are The Man Who Ate a Car (shown in the 2002 L.A. Freewaves festival), The Wedding Song (shown at the 2001 Videopoem Festival in Vancouver, Canada) and Stage Sleep.

From 1992 to 1999, he edited the journal Witz: A Journal of Contemporary Poetics, and he currently edits a chapbook series of poetic prose titled Margin to Margin.

Reiner’s own writing has generally been in the form of prose-poetry or short fictions that are poetically centered. His books include A Coward’s Libretto (1992), Ogling Anchor (1998), and Pain (2001).

He was formerly the Director of Foundation and Government Relations at Center Theatre Group in Los Angeles, He now serves as a freelance fundraising consultant to cultural and arts organizations. He recently composed 14 songs for a musical performed in Los Angeles.

Reflected at three times diminution words ring along wealth and strength, strong stressing deliberation, delight, memorial. And so in cahoots at fault against the antics of preposition. What is not obscure, unsaid, looks for the slightest waver, comb thin voice squeal out of control, “Canyon and Principal. Canyon and Principal.” Superb

Allure presiding over detail cartel fulsome discord vendetta legislature ventilated cue errorless airless lineament dossier owed to catchphrase Work Out Your Animal. In teeth, by rattle, in prime focus of reinvention, “you are not at liberty but may move your hands.” In what time ties
what small cord approaches. One delightful face to bury transcription. Idiot gods graze this brown bone.

Me, I note the false modesty the greats, the institution of scribbling, and the secret said sotto voce, in words anyone could understand, shimmering cost, searching force of temporary in sacred shine. Note she hears enveloped question trying understanding. Aria, overture, admonition, Highest praise presides over tough undercurrent, piquant bolt of energy itself, query’s legendary ripple. All things made equal, and some free, she fucks with the force
of mollitude, the dangling feminine, contemptuous even of planets, of nicknames. For the big secret, posing as answer, snuggling, whispering.

In the age of flowers, molting interior years, year with no was, no back then, nothing to supply story BACKOFF, CAN”T YOU SEE I’M TIED UP Crone merchant on terrace, only looking old with open suitcase bottomed out. My picture dyed green singing in perfect French a simple expression of my (almost) intentions. “The Good Consolation of Art” and “Friendship in Rooms”—and later “The Consolation of Art for all.” God’s bolt of medicine. The point of
freedom: she strokes me.

Why, here’s the original, organ and all, standing naked, soulful. I start demanding These things the older I get. It says space, rise, talk back to me.

Search for prose arbors, furious scratch above chiaroscuro, with me, against my will, constantly acquiring little by little my own attention, sleeping soundly with more life against any assiduous force, looking for my own “form of purring.” At which every bit of energy, all understanding, becomes a song of destination. Part of me even agrees with this abundance of “Lost Life” and “Lost Self.” No meaning mirrors the wealth written in potential for figure (female). Significant
fiction frying predominant search for one indivisible tone. The tone of ending.

A room I was in years ago, before I learned the language, above a wide street semicircle from the huge face of a public building. In the language I spoke to myself then, against the widening arc I saw crowds carry statues just like yours, statues “numerous as stars / before the stars were counted.” Conduit dove. Shouting in that big, high voice.

The protagonist displays his name’s soft indentation. Ribs of affinity, arid marrow. Joke focused on the body. At night, several uncertain fires in the distance, Toward the hills. I cover them with my fingers, from the bed, through the doorway, in the center of the window. Sparks orbit the stature still suspended. I transport, curry favor, secret in the most magnificent sense, solemn
done soft malevolent jingles.

Orange outdoors. All semblance of truth spilt. When she came she blew old mortality into the smallest distance, span between the percolator (percolating) and the wooden table (sill). Spirit fumes, revenge of the bass set in ruins of imperial chambers. Stranded! Affirmation of temperament, weight commiserates. Living on the last rib of land. I (my body). Ocean lace. Ship obscured by flags of the marina.

Poke and prod the unbirthable. “I’m just a friend, just an aficionado.” A pause between question and cough. The singer’s quaver an undertow. A moment laminated by lyric.

Solitude guarded triumph, slow self fade to invincibility. Dope wind recidivist year, soft patter of mariachi, sore raised higher and higher into perdition. Cinema solvent lay insurrection aspiring to humane. Pisses me mondo. Not in semblance of piété, not in rising air, “that testicular look.” In mania of sickness. Corrupt senile balls revert to rough perfection. Not the ambience of memory or love of truth or time’s signature. Not the appearance of appearance. Not the clarity
of sleep.

Do me a favor, just this once, against quality procured by moment. The huge painting against the furnace wall. Poverty of the alcove. Apparition of a window, a cypress. My record of hate, groping the old globe.

Smoke pours out of the alley. The tenor launches into a long, piteous how. The action escalates. With each breath he says, “It can’t continue.” The pretender is granted brief chorus.

What is spoken softly, complement against compliment. Not the tra la la’s allotted to us, not my own vulgate, not that old song of glory. What beast can alter its own material? Ask me about the fire. Voice, mentor of place. The word that continues to grow. Art of atonement. Wreckage of transcription. The scream heard from the street

A final flicker of starlight rifles through the room. I am disguised as whatever I appear to be. Figure of desire and figure of time. Mask in arena. Ogling anchor again.

Posted by Douglas Messerli at 10:19 AM