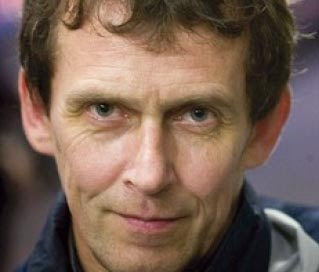 Charles Ducal was born in Leuven, Belgium on April 3, 1952. To fellow farmers he was known as Frans Dumortier, but soon became known to fellow poets as Ducal.
Ducal’s universe consisted of pigs, God, mothers, poets and himself as all equals, without discrimination. His poetry contains a great deal of irony and humor, yet doesn’t shy away from such grand themes as language, religion, and sexuality. Ducal’s poetry is often described as blas-phemous, but, “shocking” may be a better epithet.
His first book, Het huwelijk (Marriage, 1987) established his career by criticizing the institution of marriage. Subsequently, in De hertog en ik (The Duke and I, 1989), he changed tack by recycling myths and fables to evoke an alienated world in which the poet was pursued by the ominous figure of the duke.

In Moedertaal (Mother Tongue) he expanded on the relationship between motherhood and language. Ducal sees language as a code of magic, a vision he shares with Dutch poet Gerrit Achterberg and German master Rainer Maria Rilke. Language, according to Ducal, may at once draw reality in and push it away.
In Naar de aarde (Towards Earth) of 1998, Decal finally chose a poetic in which social commitment is the ideal to strive for. This social contract is also expressed in a series of leftist papers, collected as Kamiel Vanhole, attacking the Belgium far right and the war in Iraq.
After Naar de aarde Ducal remained quiet for eight years, resulting in a fear that this volume had closed his literary testament. In 2006, however, Ducal published a highly-received new work, In inkt gewassen (Washed in Ink), which received the Herman de Coninick Prize; and, in 2009, he published another new collection, Toegedekt met een liedje (Covered with a Song).
Today Ducal teaches Dutch in the Sint-Albertus College Haasrode.

Sometimes we see the spirit descend
and remain on the head of one person
with the power to translate God
into a simple, human lesson:

the machine is truck,
the surplus converted into bread
and faith, the rocky ground covered
with fertile soil, the children

of God baptized with insight. Yes, at times
the spirit comes and warms us a little,
a wondrous dove, a fiery tongue.

Afterwards the flesh cries out, possessed by him,
the fits and guns appear,

we have our doubts.


The Flesh in All Its Forms

is the flesh in all its forms.
It prays, it mutters, it screams
so as not to decompose.

and grazes down reality
in bored rows. But at night
it buys a ticket to the theater

to abandon itself.
For it is eagerly rung through
And informed of its bearing,

which is cheerful, light as a feather.
Flesh in good health, bathed in the mirror
could nearly gain weightlessness.

It has purpose and meaning.

Underfed and battered
it is free to be picked up
as fuel for one’s feelings.

Sometimes, when I am empty,
it happens that a long forgotten voice
from the crowd in the street
arises again and finds me there.

Then it’s as if I’ve lost my way
and must return to the house
in its original state,
before I cleared it out.

As if from the accounts, the garbage
something has yet to be retrieved,
something unsettled, unmanaged,
that I left behind so I could leave.

Sometimes, when I am empty,
while ink is filling my eyes and voice
by surprise it brushes my ear lightly,
so incomplete. But to return

from the flaccid belly of the field
there rose a wall,
created (in our sleep) a hasty caesura
in the endless mud and rain.

We, of tender flesh,
came groping in the dark,
tore our mouths
on the new myth,

concerning us,
conclusive, neutral,
too smart to just sink back
in the layer of fat, the warm ground

in which we rooted as children.
Someone lifted us up
and punched into our ear
the number meant for us.

So it started: once in the sty
we learnt to forget ourselves,
not to move, sleep or eat,
be meat until the final

In the beginning there was mud.

At night a sow sometimes walked
across the scene, panting and waddling,
as if colored by our lust.

Bread and water, days standing still
as posts for a fate tied to this place.
Man and animal sleeping together,
inseparable, saturated with moisture.

And nowhere a word
to touch themselves.

and taught us to ape his image,
touch the flesh with the word,
turn lust into money.

as if something human leaves the sty.

The pig lives on the other side
of love, low
to the ground of our loneliness.

It lays itself down lets itself be bitten
as the flesh that laughs
in our most secret of dreams.

It roots in muck and at a trot
the language that we
write with our hands washed.

If one of us were to lose his head,
we’d cry, the both of us,
as though possessed.

A door creeks, a light buzzes on.
Caught out a rat flees
into the ceiling.

Awakened from the flesh
the noise of hunger rises.

Incredibly heavy the dust hangs
in the webs, incredibly
heavy the stench.

Were you here before?

Beneath the load rising
slow and greasy
the toxic stream.

Do you know the rules onboard?

As long as the ink is wet
the farm stays in speech.

A crow searches the dunghill
as a finger browsing a dictionary.

In the backyard notions lay
rusting as fatigued steel.

The door in which a sty begins
gives off a smell of old poetry.

In ink splatters the flies swarm
out across the creaking barrow.

The hand that is about to dig
roots meaninglessly through the feed.

Wind and rain closed the windows
We sat kneeling by the hearth
in the religion we would inherit.
The woman who bore us
cast spells to make us small.
Her voice droned dully on our necks.
We sat mute, newly initiated.
The man who had begotten us
raised his hand. We offered our heads.
He imprinted his thumb in our brains.
Wind and rain bombarded the dream.
Under the bed, wolves and witches slept.
—Translated from the Dutch by Kendall Dunkelberg

for I will deliver the inhabitants of the land into your hand;
and thou shalt drive them out before thee.
(Exodus 23:31)

Memory is cut away
with a festive blade.
Then, in proverbs swathed,
the head is placed on the table,

the smell of sweetness in a circling swarm
of chatter and irritating queries.
The head gives no reply, tells us
what is right, given the stories

that lie buried under centuries of will.
It is merely a matter of digging and freeing
them for what they promised to fulfill.
What once stood has been blown clear

of the tongue, pure and white.
Were people once made to flee,
from here, where happiness falls from the sky?
Now is the time, the time of feasts.

The flies buzz, and it matters

not in the least.

In a year unnumbered,
in a town unnamed,
a violence arises in the night.

Set in motion by God's own hand,
it tears down, casts out.
The fulfillment of a vow.

They conceal mines in the rubble,
so no dog dare come . . .
Then a prayer of thanks.

Then comes the truth,
and she lies down, in the middle,
between the town and the tents.

She lies at the right distance;
no refugee gets around her.

In the new school,
children sing and dance.

A POET IN SDEROT*

To words poetry is unbeholden;
words strung like barbed wire.
They serve to secure, to control.
They adapt to the meaning that lies

on the border between us and out
there. An animal invades our sleep
like a mole roving in our gardens,
searching for words extinct.

It cannot be named, except by this tongue,
in which it sits bound, locked up,
a threat to be smoked out of its den.

Poetry stands by, a minor unsettlement,
in which the animal becomes human again.

Here, too, truth lies in between.
A flood of ink in our heads.
They are equally wrong, those who bereave
and those bereft. They see,

those who venture across the line,
a difference, think “not the same, no”
but then watch someone cast a stone
to the other side, and there too a child cries.

Far from the truth lies a pair of glasses,
broken, knocked from a face.
What could once be seen has been erased,
an empty space, a missing link.

Far from the truth flows no ink.

One does not scrawl fate in the wind.
We seek sanctuary behind
the wall, full of words on our side,
stamped with the holy number, this

stubborn plurality of a faith, in search of a voice
that can unite us in a common song,
a hymn and history to which we belong,
from the ashes of a tongue we rejoice.

The other side of the wall is ours too,
though scarred by signs of enmity.
We simply wipe it clean, unread.
Those who find a hole are blown back
into the void.

First, we will bury you in the sand,
with your head free to speak
about mutual understanding, about peace;

first, we will make your field our own,
station soldiers between mine and thine,
direct the camera from our side;

first, we will count our dead
from the past two thousand years
and justify the beating,

and wipe the spit from our hands
and declare – it's clear as day;
you want no peace in this land.

looked on, detached.
He stood on their side and saw.
Of our side he only perceived
what from yonder was clear

Not the rights, the history,
our belief in the promised land,
their local significance
in the execution of God's plan.

He saw and wrote of bodies and homes
in rubble, saw the human stream inundate.
He saw and recorded the sober
facts, and while he wrote the rumor came

that there were forces approaching,
driven forth by a terrible hatred
that would wipe out God's chosen.
Then he left and looked at the case

from our side and saw that
which was only visible from here.
And he wrote and he was detached,
as an observer should be.

When I heard that the house I called mine
was stolen, I asked the authorities who
the owner was. They said: “Your head is full of ash,
you’re still weak, you know nothing of the fight.”

When I heard that the owner was alive
and carried the key in his pocket, I sent
the locksmith away. He went to the authorities.
Then the locks were changed.

On memorial days, called to remembrance
my fellow downtrodden roamed in my head.
Beneath the ash, the issue smoldered, unsaid.
But the owner never came. It slowly went dead.

Even Auschwitz was nothing special, of course.
Many survivors came to this place,
a little despised but usable, and
received a monument to retrieve

from history the transportation to the camps
and to form the grindstone of a nation.
It was the horror of all ages, of course,
but as such became exclusive, ownership

of pain transformed into ownership of land.
Who lived in this street, in this house?
Who drew water from this well?
Who sold his goods at this market?

Who, about Auschwitz, could have any doubt?