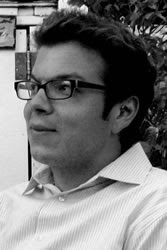 Ben Lerner was born in Topeka, Kansas, in 1979. He holds a B.A. in political science and an M.F.A. in creative writing from Brown University. A former Fulbright Scholar in Madrid, Lerner co-founded and co-edits No: a journal of the arts.

His first book, The Lichtenberg Figures, was published by Copper Canyon Press in 2004. A Lannan Literary Selection, The Lichtenberg Figures was named one of the year’s twelve best books of poetry by Library Journal. Copper Canyon published his second book, Angle of Yaw, in the fall of 2006 which was National Book Award finalist. He currently teaches poetry and literature courses at California College of the Arts.


from Angle of Yaw

SEEN FROM ABOVE exposition, climax, and denouement all take place at once. God sees the future as we see the past: through a trimetrogon. In the name of the camera, the film, and the view itself. Simultaneous eternities are superimposed to create the illusion of plenitude, but the transposition of planes is a poor substitute for the transmigration of souls. I think Andrei Rublev says, Nothing is as terrible as snow falling in a temple, because without a distinction between inside and outside, there can be no extra-temporal redemption. That, and how anybody can just lie down an make an angel, even a Tartar. Even an angel.