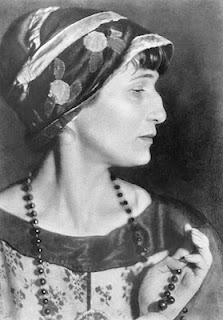 Born Anna Andreevna Gorenko on June 23, 1889, Akhmatova grew up in Tsarskoye Selo near St. Petersburg, Russia. In 1903 she met the young Russian poet Nikolay Gumilyov, whose desperate courtship of her served as the subject of many of the poems she began writing in 1905. In 1910 Gumilyov and Akhmatova were married near Kiev. After their honeymoon in Paris, they settled in Tsarskoye Selo, with Gumilyov returning to Abyssinia on a scientific expedition later that year. In 1911 Gumilev returned, and the couple again traveled to Paris where Akhmatova met the artist Amedeo Modigliani. Upon their return to Russia they involved themselves in an active literary life, forming a Poets' Guild, whose members broke with the dominant Symbolism of the time. Six poets─Gumilyov, Akhmatova, Osip Mandelshtam, Sergey Gorodetsky, Vladimir Narbut and Mikhail Zenkevich─joined forces, calling themselves the Acmeists. Their poetry focused upon a vivid representation and direct statement of life. In 1912 Akhmatova's first book of poetry, Evening, was published, followed by Rosary (1914), both of which were immediately successful in pre-revolutionary Russia.


A son, Lev, was born to the Gumilevs in 1912, but over the next few years Akhmatova would be able to spend little time with her husband. In the spring of 1913 he returned to Abyssinia as director of an expedition by the Academy of Sciences, and the following year he volunteered for the Russian front of World War I. 1915 began the long decline of health and well-being for Akhmatova. Her father died in Petersburg and, in the autumn, she was diagnosed with tuberculosis. In 1917, the year of the revolution, Akhmatova and Gumilev seperated and divorced the following year. That same year she published White Flock, dedicating the poems to her artist-friend Boris Anrep, who soon after left Russia, never to return. As Lenin and the Bolsehviks seized power, Akhmatova married Vladimir Shileiko, like Gumilyov an Assyriologist by profession. That winter was one of great privation and cold. The following year saw the instigation of the Red Terror against opponents of the new Soviet regime. Gumilev was shot by a firing squad in 1921. In the same year, Akhmatova published her fourth collection, Plantain, and the following year she published Anno Domini MCMXXI, soon after which the futurist poet Vladimir Mayakovsky denounced her. The party determined not to arrest her as long as she did not publish further works.


Akhmatova continued writing, however, despite the authorities' harassment. Over the next few years she would experience chronic ill health and see her good friends the Mandelstams exiled to Cherdyn and, in 1934, her own son arrested. In 1937-1938, the years millions of Russians were imprisioned and sent to concentration camps, her son was again arrested and held for seventeen months in Leningrad; Mandelstam was arrested and died in a transit camp. In 1940 the ban on Akhmatova's works was briefly lifted, and From Six Books, a selection with new poems from her previous books, was published and then withdrawn from sale. Akhamatova suffered her first heart attack. Lev was arrested again in 1949, and would not be released until 1956, in part because of her 1945 meeting with Isaiah Berlin, First Secretary in the British Embassy in Moscow. Over the next two decades other books, Selected Poems, Poems 1909-1945, and Poems 1909-1960 appeared in censored editions. Not until 1963 did an uncensored collection, Requiem (published in Munich), appear. Akhamatova died in a Moscow convalscent home on March 5, 1966.

In my room lives a beautiful
Slow black snake;
It is like me, just as lazy,
Just as cold.

In the evening I compose marvelous tales
On the rug by the fire's red glow,
And with emerald eyes
It gazes at me indifferently.

At night the dead, mute icons hear
Resisting moans...
It's true, I would desire another
Were it not for the serpent eyes.

But in the morning, submissive once more, I
Melt, like a slender candle...
And then from my bare shoulder
A black ribbon slides.


He loved three things in life:
Evensong, white peacocks
And old maps of America.
He hated it when children cried,
He hated tea with raspberry jam
And women's hysterics.
...And I was his wife.

I don't need legs anymore,
Let them turn into a fish's tail!
I'm swimming and the coolness is delightful,
The far-off bridge grows dimly white.

I don't need a submissive soul,
Let it turn into smoke, a wisp of smoke
Of tender, light blue
Flying over the blackened quay.

See how deeply I dive,
Clutching seaweed in my hands,
No one's words will I repeat
And on one's longing will capture me...

But you, my distant one, is it true
That you've become sadly mute and pale?
What's this I hear? That for three whole weeks
You've been whispering: "Why, unhappy girl?"


She approached. I didn't betray my agitation,
Just stared serenely out the window.
She sat there, like a porcelain idol,
In a pose she had adopted long ago.

Being cheerful─becomes a habit,
Being attentive─is more difficult...
Or has languorous indolence triumphed
After those heady March nights?

The tiresome buzz of conversation,
The lifeless heat of the yellow chandelier,
And over the slightly raised, slender arm,
The glimpse of an artful coiffure.

Her companion smiles again
And watches her hopefully...
My lucky, rich inheritor,
Welcome to my legacy.

It's impossible to get here
By either rowboat or cart,
The water stands deep
On the rotten snow,
Besieging the estate
On all sides...
Ah! Nearby pines
A sort of Robinson Crusoe.
He walks around staring at sleighs,
At horses, at skis,
And then he sits on the divan
And waits for me,
Shredding the carpet
With his short spurs.
Now that meek smile
Won't appear in mirrors.

Don't send me a dove,
Don't write me disquieting letters,
Don't make the March wind keen in my face.
Yesterday I entered green paradise,
Where there is peace for body and soul
Under a tent of the poplars' shadow.

And from here I see the little city,
The barracks and sentry boxes at the palace,
The yellow Chinese bridge above the ice.
For three hours you've been awaiting me─you waver,
But you cannot leave the porch
And you marvel, so many new stars.

As a gray squirrel, I will leap on the alder tree,
As a weasel, shy, I'll scurry by,
As a swan, I'll call to you,
So that it won't be terrible for the groom
To wait in the whirling blue snow
For his dead bride.


So, I remained alone,
Counting the empty days.
O, my free companions,
My swans!

And I'll not summon you with song,
Not bring you back with tears,
But in the sad hour of dusk,
Remember you in my prayers.

Struck by the deadly arrow,
One of you has fallen,
And another, kissing me,
Has become a black raven.

But it happens, once a year
When the ice is melting,
I stand by the clear waters
In the Catherine Gardens.

And I hear the splashing of great wings
Over the blue surface of the lake.
I do not know who has opened the window
In the prison of the grave.

—Translated from the Russian by Daniel Weissbort


A monstrous rumor roams the city,
Stealing into houses, like a thief.
Shouldn't I read the story of Bluebeard
Before I lie down to sleep?

How the seventh bride mounted the staircase,
How she called to her younger sister,
She waited─holding her breath,
For her dear brothers or the dreaded messenger...

A snowy cloud of dust flies,
The brothers dash into the castle couryard,
And over the tender and innocent neck
The slippery ax will not rise.

Now, comforted by this fairy tale,
I'll certainly sleep peacefully.
Why then is my heart pounding,
Why can't I close my eyes?

He who compared himself to the eye of a horse,
He glances sideways, looks, sees, recognizes,
And instantly puddles shine
As melted diamonds, ice pines.

In lilac haze repose backyards,
Station platforms, logs, leaves, clouds.
The whistle of a steam engine, the crunch of watermelon rind,
In a fragrant kid glove, a timid hand.

He rings out, thunders, grates, he beats like the surf
And suddenly grows quiet─it means that he
Is cautiously advancing through the pines,
So as not to disturb the light sleep of space.

And it means that he is counting the grains
From the stripped stalks, it means that he
Has come back to a Daryal gravestone, cursed and black,
After some kind of funeral.

And once more, Moscow weariness burns the throat,
Far off, a deadly little bell is ringing...
Who lost his way two steps from the house,
Up to the waist in snow and no way out?

Because he compared smoke to the Laocoon,
and celebrated cemetery thistles,
Because he filled the world with the new sound
Of his verse reverberating in new space─

He was rewarded with a kind of eternal childhood,
His generosity and keen-sightedness shone,
The whole earth was his inheritance,
And he shared it with everyone.


from Sweetbrier in Blossom: From the Burnt Notebook
9
In a Broken Mirror

That starry night I heard
Irretrievable words,
And my head whirled
As if over a flaming abyss.
And destruction howled at the door,
And the black garden echoed like an eagle owl,
And the city, mortally weakened,
Was Troy at the ancient hour.
That hour was unbearably clear
And, it seemed, it reverberated to the point of tears.
The gift you gave me
Was not brought from afar.
It seemed to you idle diversion
On that fiery night.
And it became slow poison
In my enigmatic fate.
And it was the forerunner of all my misfortunes─
Let's not remember it!..
Still sobbing around the corner is
The meeting that never took place.

["In my room lives a beautiful"], "He Loved...," ["She approached. I didn't betray my agitation,"], ["It's impossible to get here"], "To the Beloved," ["A Monstrous rumor roams the city,"], "The Poet," and "9 / In a Broken Mirror,"
Reprinted from The Complete Poems of Anna Akhmatova, trans. by Judith Hemschemeyer, and Edited by Roberta Reeder (Boston: Zephyr Press and Edinburgh: Canongate Press, 1992). ©1990, 1992 by Judith Hemschemeyer. Reprinted by permission of Zephyr Press.