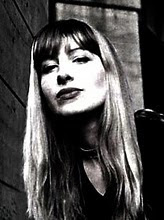 Allyssa Wolf was in born in Columbus, Ohio, in 1971, and raised in rural Pataskala, Ohio, a student of the bible and Christian missionary until she was thirteen. At age ten she became a poet after reading Lewis Carroll’s Through the Looking Glass.

She moved to New York at seventeen and continued to move across the country for several years, working dead-end jobs, living in places including San Francisco, Los Angeles, Phoenix, Florida, New Mexico, Massachusetts, and Ohio, where she attended the University of Cincinnati for two years.

After Carroll, other early literary influences were Beckett, Pirandello, Plath, Kathy Acker, Rimbaud, James Wright, Burroughs, and Spicer. She was mostly disinterested in what she knew of contemporary poetry until reading an essay by Leslie Scalapino in the American Poetry Review titled “The Canon.” It was in searching out other work by Scalapino on the web that she discovered the Los Angeles journal Ribot, and sent her first poetry submissions to editors Paul Vangelisti and Standard Schaefer. The work was accepted blind, but eventually led to friendships, as well as an open invitation to sit in on poetry workshops at the Otis College Writing Program where she worked with Norma Cole, Scalapino, Vangelisti, and Schaefer.

Her work has or will soon be included in Fence, Versal (The Netherlands), No-Tell Motel, The Bedside Guide Anthology, Octopus, Ribot, Poesia in Azione (Italy), The New Review of Literature, Cutbank, Montana, Fascicle, The New College Review, Volume I, and Soft Targets.
She is editor of a chapbook series, Gateway Songbooks, and online magazine, Ghost Play. Her first collection of poems, Vaudeville, was published by Seismicity Editions early in 2006. She is currently at work on her next two poetry manuscripts: Prisoner’s Cinema and Pure Waste.
She now lives in San Francisco, in the area called variously the Tender, Nob and the Theater District.

Rather this or that says one,
As another sings low

Within a crowd crying
What won’t exist?
A rose on the rod
With this I look on you now

A spike of light?

Is it an anger which turns
My face to yours?