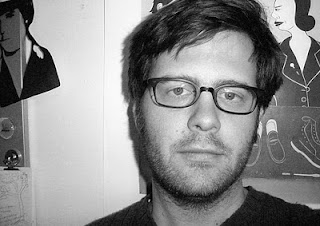 Born in Columbus, Ohio, Aaron McCollough was raised in Knoxville and Chattanooga, Tennessee. His father is an Archeologist and Cartographer. His mother directs a public mental health clinic in rural Georgia. He earned degrees in English from the University of the South (Sewanee), North Carolina State Uni-versity, and the University of Michigan. He also obtained an MFA in poetry from the Iowa Writers’ Workshop. For the last five years, he has been working on his dissertation and teaching literature and composition at the University of Michigan.
His first book Welkin was chosen by Brenda Hillman for the first annual Sawtooth Prize and was published by Ahsahta Press in 2002. Double Venus, was published by Salt Press the following year. Little Ease, his third book, was published by Ashahta Press in 2006.


There It Hurts Me


There where the yellow spot is the finger
Points

There it hurts me

In the hovering house

The form of that thing I’ve fallen in

Or illusions of my doubt

Legs in the breach

Gently pressing at the perimeter

Between the greeting and the granting of audience

The yellow spot lines converging
At the mark on the door

The confession you are looking for

I have it here