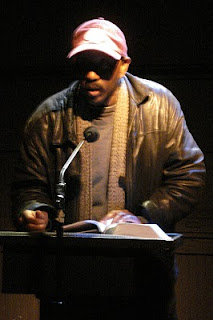 Born and raised in South Central Los Angeles, Will Alexander grew up around the violence that has plagued this area for decades. The only child of working class parents, he attended Washington High School, avidly participating in school sports. In 1972 he graduated from the University of California Los Angeles with a Bachelor of Arts degree in English and Creative Writing.

In the mid-1970s the noted Black poet, K. Curtis Lyle, a founding member of the Watts Writers Workshop, met with Alexander and others at his home and at an incense business run by musicians Ray and Ernest Straughter. This period was also marked by a twelve hour dialogue in San Francisco with the surrealist poet Philip Lamantia which had an enormous effect on him. Through those gatherings Alexander began confirming the power of works of his readings of Bob Kaufman, Octavio Paz, and Francophone Negritude writers such as Aimé Cesaire and Jean-Joseph Rabéarivelo--all poets who would strongly influence his subsequent poetry and, later, the visual art he had begun creating. Their themes of cosmic isolation from society and interior discovery strongly affected him, and helped him to what he describes as an “alchemical metamorphosis,” which drew him away from his intense involvement in sports to his participation in the arts.

In 1987 he published his first book, Vertical Rainbow Climber, which already contained the heady mix of metaphor and sophisticated language that characterizes so much of his work. A short chapbook, Arcane Lavender Morals, followed in 1994, with new books-including The Stratospheric Canticles, Asia & Haiti, Above the Human Nerve Domain, and Towards the Primeval Lightning Field following throughout the 1990s. In 2009 New Directions published Alexander's collection of poetry, The Sri Lankan Loxodrome. His writing represents a complex distillation of images from many fields, including botany, astronomy, psychology, physiology, mysticism, and history. He has also written novels and dramas.

For a large selection of Alexander's readings on tape, click below:
http://writing.upenn.edu/pennsound/x/Alexander-Will.php

we see them now
throughut a wrenching prolapse through the kingdoms of hell
caged by the demons
within the macerated bones of mutual self-bleeding...

he distanced from prone ventriloqual stammer
from flesh
& habit
& drought


Inside the Ghost Volcano

as mist
as a power cast before oasis


(from Impulse & Nothing, unpublished)

“The Impalpable Brush Fire Singer” and “Inside the Ghost Volcano”
Reprinted from Above the Human Nerve Domain (New York: Pavement Saw Press, 1998). Copyright ©1998 by Will Alexander. Reprinted by permission of the author.

Hello,my name is Luca Paci. I translated La ragazza Carla by Elio Pagliarani into English. Would you be interested in publishing some extracts on your blog?
Thanks Luca

Just came across this page as I'm preparing to share Will Alexander's Compression & Purity with students in a poetry writing class. Each time I read or hear Will's work, it's a wonder, an opening, perhaps, as he might say, the "I being blur who shapes the empyrean"

Thanks for posting this page, and this blog.