Edwin Arlington Robinson was born in 1869 in Head Tide, Maine, and grew up in Gardiner in the same state—the Tilbury Town of his poems.

From 1891 to 1893 he studied at Harvard University, and then attempted various jobs upon the death of his father and his brother Herman’s alcoholism For nearly thirty years he lived mostly at home, working as a clerk in New York’s Customs House and writing poetry. He was helped, in part, by Mrs. Edward MacDowell, wife of the noted American composer, who turned her home, Hillcrest, into an artists’ and writers’ colony. 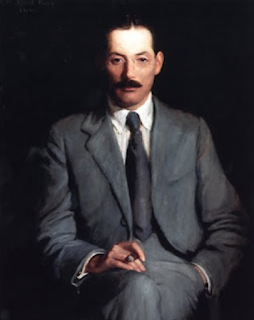 His first book of poetry, The Torrent and The Night Before, was privately printed, but was revised and republished by a Boston publisher the following year as The Children of the Night (1987). This book contains some of Robinson’s most noted work. Many of Robinson’s other publications throughout the years were devoted to legendary and historical figures in which he presented his characters in novelistic and psychological fashion. His primary influence on poets of this period might be said to be Robert Frost, who similarly uses the monologue and dialogue as a poetic narrative tool.

Although he was awarded the Pulitzer Prize three times during his life, and is now recognized by some critics as the first great modern American poet, Robinson’s work, with its rhymed meter, now seems dated to many readers. He died in New York City in 1935.

There where the vines cling crimson on the wall,

And in the twilight wait for what will come.

The leaves will whisper there of her, and some,

Like flying words, will strike you as they fall;

But go, and if you listen she will call.

No, there is not a dawn in eastern skies

To rift the fiery night that’s in your eyes;

But there, where western glooms are gathering,

The dark will end the dark, if anything:

God slays Himself with every leaf that flies,

And hell is more than half of paradise.

No, there is not a dawn in eastern skies—

Out of a grave I come to tell you this,

Out of a grave I come to quench the kiss

That flames upon your forehead with a glow

That blinds you to the way to where she is,

Bitter, but one that faith may never miss.

Out of a grave I come to tell you this—

To tell you this.

There is the western gate, Luke Havergal,

There are the crimson leaves upon the wall.

Go, for the winds are tearing them away,—

Nor think to riddle the dead words they say,

Nor any more to feel them as they fall;

But go, and if you trust her she will call.

There is the western gate, Luke Havergal—

I cannot find my way: there is no star

In all the shrouded heavens anywhere;

Ad there is not a whisper in the air

Of any living voice but one so far

That I can hear it only as a bar

And angel fingers wove, and unaware,

Dead leaves to garlands where no roses are.

No, there is not a glimmer, not a call,

For one that welcomes, welcomes when he fears,

The back and awful chaos of the night;

For through it all—above, beyond it all—

I know the far-sent message of the years,

I feel the coming glory of the Light.

Whenever Richard Cory went down town,

We people on the pavement looked at him:

He was a gentleman from sole to crown,

And he was always quietly arrayed,

And he was always human when he talked;

But still he fluttered pulses when he said,

“Good-morning,” and he glittered when he walked.

And he was rich—yes, richer than a king—

And admirably schooled in every grace:

In fine, we thought that he was everything

To make us wish we were in his place.

So on we worked, and waited for the light,

And went without the meat, and cursed the bread;

Went home and put a bullet through his head.

Grew lean while he assailed the seasons;

He wept that he was ever born,

And he had reasons.

Miniver loved the days of old

When swords were bright and steeds were prancing;

The vision of a warrior bold

Would set him dancing.

Miniver sighed for what was not,

And dreamed, and rested from his labors;

He dreamed of Thebes and Camelot,

That made so many a name so fragrant;

He mourned Romance, now on the town,

And Art, a vagrant.

Albeit he had never seen one;

He would have sinned incessantly

Could he have been one.

And eyes a khaki suit with loathing;

He missed the mediæval grace

Miniver scorned the gold he sought,

But sore annoyed was he without it;

And though about it.

Scratched his head and kept on thinking;

Miniver coughed, and called it fate,

And kept on drinking.

She fears him, and will always ask

What fated her to choose him;

She meets in his engaging mask

All reasons to refuse him;

But what she meets and what she fears

Are less than are the downward years,

Drawn slowly to the foamless weirs

Of age, were she to lose him.

Between a blurred sagacity

That once had power to sound him,

And Love, that will not let him be

The Judas that she found him,

Her pride assuages her almost,

As if it were alone the cost.—

He sees that he will not be lost,

And waits and looks around him.

A sense of ocean and old trees

Envelops and allures him;

Tradition, touching all he sees,

Beguiles and reassures him;

And all her doubts of what he says

Are dimmed with what she knows of days—

Till even prejudice delays

And fades, and she secures him.

The reign of her confusion;

The dirge of her illusion;

And home, where passion lived and died,

Becomes a place where she can hide,

While all the town and harbor side

Vibrate with her seclusion.

We tell you, tapping on our brows,

The story as it should be,—

As if the story of a house

Were told, or ever could be;

We’ll have no kindly veil between

Her visions and those we have seen,—

As if we guessed what hers have been,

Or what they are or would be.

Meanwhile we do no harm; for they

That with a god have striven,

Not hearing much of what we say,

Take what the god has given;

Where down the blind are driven.

Posted by Douglas Messerli at 2:15 AM