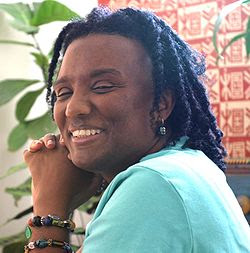 Born in Florence, Alabama, Harryette Mullen spent most of her childhood in Fort Worth, Texas. She earned her degrees in English and in Literature from the University of Texas, Austin and the University of California, Santa Cruz. For several years she worked in the Artists in Schools program sponsored by the Texas Commission on the Arts, and for another six years she taught African-American and other US ethnic literatures at Cornell University before becoming a professor at the University of California Los Angeles, where she teaches African-American literature and creative writing.
Her first book was Tree Tall Woman in 1981, but it was her second and third titles, Trimmings in 1991 and S*PeRM**K*T in 1992 that brought her national attention as a poet. Muse & Drudge followed in 1995, and in 2002 she gained further fame as a finalist for the National Book Award for her collection Sleeping with the Dictionary. A volume of her earlier work, Blues Baby was published in the same year.
Mullen has received several major grants and awards, including artist grants from the Texas Institute of Letters, the Helene Wurlitzer Foundation of New Mexico, and a Rockefeller Fellowship from the Susan B. Anthony Institute for Women’s Studies at the University of Rochester.
Mullen’s poetry is highly charged with the love of language, and often deals with issues of race, class, and gender. But, as she herself has explained, they do not represent “the sum of her poetry.” “I can be a black woman while chewing gum and thinking about Disneyland or supermarkets, while reading Stein or Shakespeare, just as I can be a black woman contemplating conventional representations of black women in literature, media, and popular culture. Living in California, where white people are a minority, I’m not so sure that my identity or experience is “marginal.” As a woman and as a person of color, I belong to two global majorities, but I’m also aware that throughout most of history, it is not the majority that rules, but a privileged minority.”


What’s holding her up. Straps, laces. Garters, corsets, belts
with laces. What’s holding them up. If not straps, then laces.
Buttons and bows, ribbons and laces set off their faces. Girls
In white sat in with blues-saddened slashers. Laced up, frilled
To the bone. Semi-automatic ruffle on a semi-formal gown.

Her feathers, her pages. She ripples in breezes. Rim and
fringe are hers. Who fancies frills. Whose finery is a summer
frock, light in the wind, riffling her pages, lifting her skirt,
peeking at edges. The wind blows her words away. Who can
hear her voice, so gentle, every ruffle made smooth. Gathering
her fluttered pages, her feathers, her wings.

Body on fire, spangles. Light to sequin stars burn out at both ends.

What’s brewing when a guy pops the top off a bottle or can talk
with another man after a real good sweat. It opens, pours a cold
stream of the great outdoors. Hunting a wild six-pack reminds
him of football and women and other blood spoors. Frequent
channels keep high volume foamy liquids overflowing, not to be
contained. Champs, heroes, hard workers all back-lit with ornate
gold of cowboy sunset lift dashing white heads, those burly mugs.

Off the pig, ya dig? He squeals, grease the sucker. Hack that fatback,
pour the pork. Pig out, rib the fellas. Ham it up, hype the tripe. Save
your bacon, bring home some. Sweet dreams pigmeat. Port belly
futures, larded accounts, hog heaven. Little piggish to market.
Tub of guts hog wilding. A pig of yourself, high on swine, cries
all the way home. Streak a lean gets away cleaner than Safeway
chitlings. That all, folks.

Well bread ain’t refined of coarse dark textures never enriched a
doughty peasant. The rich finely powdered with soft white flours.
Then poor got pasty pale and pure blands ingrained inbred. Roll
out dough we need so what bread fortifies their minimum daily
sandwich. Here’s a dry wry toast for the new age when darker
richer upper crust, flourishing, outpriced the staff with moral
fiber. Brown and serve, a slice of life whose side’s your butter on.

A dream of eggplant or zucchini may produce fresh desires. Some
fruits are vegetables. The way we bruise and wilt, all perishable.

Californians say No
to bilingual instruction in schools

Californians say No
To blingual instructions on ballots

Crenshaw is a juicy melon. Don’t spit, and when you’re finished,
wash your neck. Tonight we lead with bleeding hearts, slice raw
or scooped with a spoon. I’ll show my shank. I’d rend your cares
with my shears. If I can’t scare cash from the ashen crew, this
monkey wrench has scratch to back my business. This ramshackle
stack of shotguns I’m holding in my scope. I’m beady-eyes as a bug.
Slippery as a sardine. Salty as a kipper. You could rehash me for
breakfast. Find my shrinking awe, or share your wink. I’ll get a
rash wench. We’ll cash a shower of cranes. I’m making bird seed to
stick in a hen’s craw. Where I live’s a wren shack. Pull back.
Show wreck. Black fade.

Waching television in Los Angeles. This scene performed in real
time. In real life, a pretty picture walking and sitting still. It’s
still life with fried span, lite poundcake, nondairy crème. It’s
death by chocolate. It’s corporate warfare as we know it. I’m
stuck on the fourth step. There’s no statue of stature of lim-
itations. I’ll be emotional disturbed for as long as it takes. You
can give a man a rock or you can teach him to rock. Access your
higher power. Fax back the map of your spiritual path. Take
twenty drops tincture of worry wort. Who’s paying for this if
you’re not covered? You’re too simple to be so difficult.
Malicious postmodernism. Petroleum jelly donut dunked in
elbow grease. You look better going than coming. You look like
death eating microwave popcorn. Now that I live alone, I’m
much less introspective. Now you sound more like yourself.

Can’t wait to be spring from shadow,
to be known from a hole in the ground.
Scarcely silent though often unheard.
Winding, wound. Wounded wind.
She turned, and turns. She opens.
Keep the keys, that devil told her.
Guess the question. Dream the answer.
Tore down almost level.
A silence hardly likely.
Juicy voices. Pour them on.
Music sways her, she concedes,
as darker she goes deeper.


Sleeping with the Dictionary

I beg to dicker with my silver-tongued companion, whose lips are ready
to read my shining gloss. A versatile partner, conversant and well-versed
in the verbal art, the dictionary is not averse to the solitary habits of the
curiously wide-awake reader. In the dark night’s insomnia, the book is
a stimulating sedative, awakening my tired imagination to the hypnagogic
trance of language. Retiring to the canopy of the bedroom, turning on the
beside light, taking the big dictionary to bed, clutching the unabridged
bulk, heavy with the weight of all the meanings between these covers,
smoothing the thin sheets, thick with accented syllables—all are exercises
in the conscious regimen of dreamers, who toss words on their tongues while
turning illuminated pages. To go through all these motions and procedures,
groping in the dark for an alluring word, is the poet’s nocturnal mission.
Aroused by myriad possibilities, we try out the most perverse positions
In the practice of our nightly act, the penetration of the denotative body of
the work. Any exist from the logic of language might be an entry in a
symptomatic dictionary. The alphabetical order of this ample block of
knowledge might render a dense lexicon of lucid hallucinations. Beside
the bed, a pad lies open to record the meandering of migratory words.
In the rapid eye movement of the poet’s night vision, this dictum can
be decoded, like the secret acrostic of a lover’s name.


Wipe that Simile Off Your Aphasia

from Trimmings
Reprinted from Trimmings (New York: Tender Buttons, 1991). Copyright ©1991 by Harryette Mullen. Reprinted by permission of the author.