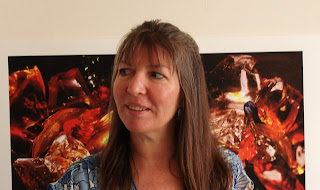 Born in Buffalo, New York, Deborah Meadows' father—and others in her family—were ironworkers, and she grew up in a working class neighborhood. But Buffalo is also hope to notable cultural institutions such as the Albright-Knox Art gallery, where she spent many hours as a young girl. In high school she traveled to Stratford, Canada for the Shakespeare festival and attended concerts of the Buffalo Philharmonic, conducted by Michael Tilson Thomas, while working at the Buffalo Paper Stock factory. Meadows attended the State University of New York, Buffalo, where she studied literature under figures such as the postmodern critic and novelist Raymond Federman and professor Myles Slatin.


Leaving Buffalo, Meadows continued her education at the California State University in Los Angeles, where she studied philosophy and literature, graduating in 1986. Soon after, she began teaching at California Polytechnic University in Pomona. Her first book of poetry, The 60’s and 70’s from “The Theory of Subjectivity in Moby-Dick,” was published by Tinfish Press in 2003. Green Integer published her Representing Absence in 2004; in the same year Krupskaya press published her Itinerant Men.
More recently, Meadows has written plays, published by BlazeBOX as Three Plays in 2015.


In recent years, Meadows has been active in international cultural affairs, traveling twice to Cuba to work to work with Cuban writers such as Reina María Rodríguez and Antonio José Ponte and she has traveled to and worked with poets in Buenos Aires. She has also been active with her faculty union and various issues involving access and equity in public higher education.


With her lover, Howard Stover, Meadows lives in the Los Angeles area. They spend part of each year in a house they built in the Piute Mountains.

My body. The power to sway
in playfulness upon a vacant sea.

A sore of voices come back to life,
[touted regularly as carved
[by invisible, gracious water:
[the body, itself.

A match, only start her, assault
the female fish, obliquely.
In place of an enormous head,
[raise the buried taken.

Turns were taken, it jetted up
[and passed round that point
wherein the event rushed a steady finger.

The process:
—red tide
—“slanting sun… sent back its reflection
[into every face, so that they all glowed
[to each other like red men”

The ideological slip:
—killed or killers, the Pequod/Pequod again

The poetic process:
—each puff from whale spout matched
puff from Stubb’s pipe
—penetrating in search of gold watch,
“His heart had burst.”

The slip in Time
—expense of moral capital to acquire it

The process of exposé:
—death agony, a witnessed
tragedy of corporeal Body

The national slip:
—casual equation, large death
and small goods use us up

Reaching
inhaled reaching, followed by or tucked
in as most stop at this place.

A place of departure where headrests, sleep,
originals are required: cement
banisters merge public and private lives,
how can order disguise the bows, bowsprits, etc.

Frost lay. I said to myself, as towards
identity and self-naming, lower your bag
and cover the darkness toward
expensive pavements and pumice the
secret inwardness. It’s all self, all
society, dreary streets and buses on from
here and hereafter. Moving
absorbs many of the works in public, so
encased in ashes, in poor boxes.

A common place. I muttered bathetic
entertainment by the weeping negro church.
I suppose I might look enough, seem
sufficient that tenting indoors, that judgment
more than ever divides. Matchless
is the miracle on the outside where the
window frosts only one-way. Northern
lights raise the dead man within, silken his
pillow lengthwise.
Now fiery, more of this scrape and plenty.


We’ve held subject positions beyond
the grave, experts claim.
A breakwall against sea surge
and psychological reduction, somebody
[or other coined it spectacular.

Official declarations that this
is the time for it were many places,
yet few of us felt implicated or even addressed,

[so we admired defacers:
This is the time for the foibles of logic
meant, alone, a long sentence
without appeal.
[The absurdities
of our shared rhetoric
omit how the body knows
[to do body things.

To bring out the shine, as a goal,
meant parental jingles extracting loyalty
[on whose behalves Our nation
[engages in it.

Sometimes you need a rock
to weigh something down.

Faux translation of Charles Baudelaire’s “To the Reader”

The sot, his error or fishing lens
lives in our spirits, works in our bodies,
so we eliminate our friendly notes
like mendicants nourishing our vermin.

Our fish are heady, our repentance milky.
We do ourselves gross injustice by what we have
and lease happiness in a scarlet shirt.
Known for its dye that runs when washed, we touch it.

On the topic of bad birds, there’s thirteen
who longs for our impress, our service,
whose baton will vaporize all our freedom
like a suave atomic scientist.

It’s the bull who has our reconstructed son!
About the repulsive objects we work on, we joke
about the day the flames of our descendants are not about here
we joke without bleakness in order to cross the sills that leak.

The poor debauched sot who lowers his mouth and eats
the martyred river from an antique cupboard
we go together along a passage of pleasure and secrecy
that is hard pressed like our agent’s orange.

Zig-zag yet still being formed by millions of hemoglobin donors
is the cut womb of the townspeople
and when we breathe death itself into our lungs,
we breathe the invisible flowers very deeply of our sad songs.

If Viola, poison, flowery painters, and revolutionaries
are not brooding again and again over their demented pleasures,
then the everyday canvas of our pitiful destiny
is our friend like a hell that can’t be hardy.

But the old images in the canyons, the mountain lions and bugs,
the chanters, scorpions, and biting snakes
are all monstrous exaggerations of those that are merchandized
at ramparts of our notorious zoo of cruelty and vice.

It is more laid, more sold, more unworldly
than anything else that can be a large gesture or big cry.
It volunteers the garbage of the land
and lowers all our attempts in this world.

The eye of the bored person involuntarily blinks
because it dreams of the sot high from smoking.
You know it’s true, that monstrous delicacy,
that drug of hypocrisy, like me, like you.

in keeping beat as nationalist pulse that races,
arranged in steps. But then coming down, erratic

altogether-now when most attacked historically –
At reading, our meter for conditioned signs now bypassed,

now that's another story: hopped up percussionists
hum of air tankers on return circuit ‘til it's out

believers are no longer pulled inward to its great
or sundown, whichever comes first. A new science,

Hadn't you hoped for a change adding fire,
telling-knots addressed to mind by hand, but the music

acquired measure runs its blood circuit, what's there
after midnight in our motivated glacial moraine. None.

No software adequate to discern delusion, an error
behind favoring the favored, never happens

boulder and drag-marks behind the car's embankment.
The means already upon us completes
our education by vanishing, tools stuck with range: