Born in Newark, New Jersey in 1871, Stephen Crane was the fourteenth child of Reverend Jonathan Crane. Both of his parents were highly religious leaders in the Methodist Church, and over the years one of Crane’s most noted traits was his rebellion against his religious upbringing.

As a teenager he worked at a news agency run by his brother, and later left for college with the goal of becoming a reporter. He published his first novel, Maggie: A Girl of the Streets, in a private printing and under a pseudonym in 1893. The novel attracted the attention of critics such as William Dean Howells and Hamlin Garland, who later championed his novel The Red Badge of Courage, published in 1895. 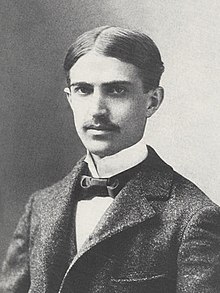 The same year, Crane published his first book of poetry, The Black Riders and Other Lines, again privately printed. The typography of this book was unusual, in that the poems appeared entirely in capital letters without titles or punctuation. Reviewers of the time—and some later critics—heaped abuse on his poetry, describing them as “garbage,” “rot,” and “lunatic.” But the success of his novel of the same year, along with the reaction, made him internationally famous.

Personally, Crane claimed to like his poetry much better than The Red Badge of Courage. Over the next years, Crane devoted himself to journalism and wrote numerous short stories, including the brilliant tale, “The Open Boat.” His work as a reporter during the Greco-Turkish War of 1897, however, led to ill health, and in 1899 he was diagnosed with tuberculosis. The same year he moved with his common-law wife, Cora Taylor, to an unheated English manor-house outside of Rye. Most of his time he spent feverously writing, but Crane did develop literary friendships with figures such as Joseph Conrad, Ford Madox Ford and H. G. Wells. While in England, he published his second collection of poetry, War Is Kind. His tuberculosis, however, had worsened, and in 1900, at the age of 28, he died in a German sanatorium.

Recently interest in Crane has resurged with the publication of Paul Auster’s study of him, Burning Boy: The Life and Work of Stephen Crane and Edmund White’s fantasy novel Hotel de Dream: A New York Novel about a fiction penned by Crane concerning a boy prostitute which Crane supposedly composed and later destroyed.

From The Black Riders

BLACK RIDERS CAME FROM THE SEA.

THERE WAS CLANG AND CLANG OF SPEAR AND SHIELD,

AND CLASH AND CLASH OF HOOF AND HEEL,

WILD SHUTS AND THE WAVE OF HAIR

IN THE RUSH UPON THE WIND:

THUS THE RIDE OF SIN.

I SAW A MAN PURSUING THE HORIZON

ROUND AND ROUND THEY SPED.

I WAS DISTURBED AT THIS;

I ACCOSTED THE MAN.

HE HELD IN HIS HANDS

THE BOOK OF WISDOM.

“THINK NOT THAT I AM A CHILD,

“FOR ALREADY I NOW MUCH

“OF WHAT WHICH YOU HOLD.

THEN HE OPENED THE BOOK.

AND HELD IT BEFORE ME.—

STRANGE THAT I SHOULD HAVE GROWN SO SUDDENLY BLIND.

I WALKED IN A DESERT.

“THE SAND, THE HEAT, THE VACANT HORIZON.”

from War Is Kind

Do not weep, maiden, for war is kind.

Because your lover threw wild hands toward the sky

and the affrighted steed ran on alone,

Hoarse, booming drums of the regiment

Little souls who thirst for fight,

These men were born to drill and die

The unexplained glory flies above them

Great is the battle-god, great, and his kingdom———

A field where a thousand corpses lie.

Do not weep, babe, for war is kind.

Because your father tumbled in the yellow trenches,

Raged at his breast, gulped and died,

Swift, blazing flag of the regiment

Eagle with crest of red and gold,

These men were born to drill and die

Point for them the virtue of slaughter

Make plain to them the excellence of killing

And a field where a thousand corpses lie.

Mother whose heart hung humble as a button

On the bright splendid shroud of your son,

I explain the silvered passing of a ship at night,

The sweep of each sad lost wave,

The dwindling boom of the steel ting’s striving,

The little cry of a man to a man,

A shadow falling across the greyer night,

And the sinking of the small star;

Then the waste, the far waste of waters,

And the soft lashing of black waves

For long and in loneliness.

Remember, thou, O ship of love,

Thou leavest a far waste of waters,

And the soft lashing of black waves

For long and in loneliness.

A silence from the moon’s deepest valley.

Of hooded men, squat and dumb.

Before them, a woman

Moves to the blowing of shrill whistles

And distant thunder of drums,

Or move at her will, swishing stealthily over the sand.

Dreaming and swaying and staring,

The wind streams from the lone reaches

Of Arabia, solemn with night,

And the wild fire makes shimmer of blood

Over the robes of the hooded men

Circle the throat and the arms of her,

And over the sands serpents move warily

Swinging to the whistle and drums,

Dreaming and swaying and staring,

The dignity of the accursed;

The glory of slavery, despair, death,

Is in the dance of the whispering snakes.

A man said to the universe:

“However,” replied the universe,

“The fact has not created in me

“A sense of obligation.”

A man adrift on a slim spar

A man adrift on a slim spar

A horizon smaller than the rim of a bottle

The near whine of froth in circles.

The incessant raise and swing of the sea

And growl after growl of crest

The seas are in the hollow of The Hand;

Oceans may be turned to a spray

Raining down through the stars

Because of a gesture of pit toward a babe.

Die with a long moan and a roar

Amid the tumult of the fishes

And the cries of the ships,

Because The Hand beckons the mice.

The horizon smaller than a doomed assassin’s cap,

A reeling, drunken sky and no sky

A pale hand sliding from a polished spar.

The puff of a coat imprisoning air.

A face kissing the water-death

A weary slow sway of a lost hand

And the sea, the moving sea, the sea.


Posted by Douglas Messerli at 2:35 AM