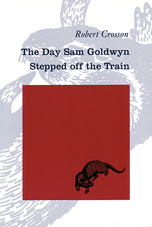 Born in Canonsburg, Pennsylvania in 1929, Robert Crosson remained in the East until his family moved to Pomona, California in 1944. He attended the University of California, Los Angeles, and received his B.A. in English in 1951, briefly joining the Communist Party during his college years. After college he began working as an actor in television and film, in 1954 landing a small role in White Christmas. The following year he appeared as the character Danny Marlowe in I Cover the Underworld. But Crosson grew increasingly dissatisfied with the Hollywood scene, which, combined with his brief political activities, dimmed his prospects for further Hollywood employment. In 1959 he traveled to Europe, working his way through various countries as a piano player, a black-marketer, and pimp.
In 1960 he returned to the United States, enrolling in Library Science at the graduate level at the University of California, Los Angeles. Eventually he dropped out, taking night jobs and attempting by day to write his first novel. Jobs as a painter and carpenter, another movie role (in Mike’s Murder in 1984), and a 1989 Poetry Fellowship from the California Arts Council, allowed him to survive during these lean years; however, as he grew older Crosson grew increasingly dependent on “the kindness of strangers” and friends, particularly Los Angeles poet Paul Vangelisti, who–when Crosson was evicted from the Laurel Canyon house where he was caretaker–took him in. Crosson lived with Vangelisti from 1993 until his death in 2001.
From the early 1980s to his death, he had several books of poetry published. He 1981, his first book, Geographies, was published by Vangelisti’s and John McBride’s Red Hill Press. They also published his poetry (along with the works of two other poets) in Abandoned Latitudes in 1983. Calliope was published the following year by the Los Angeles publisher Illuminati. In 1994 the Italian publisher Michele Lombardelli published Crosson’s The Blue Soprano; and Guy Bennett’s Seeing Eye Books published In the Aethers of the Amazon: Poems 1984-1997 in 1998; But most of Crosson’s writing remained unpublished at the time of his death–the result of a heart attack brought on, doubtlessly, by years of heavy smoking and drinking. Luigi Ballerini’s Agincourt press published The Day Sam Goldwyn Stepped off the Train, a selected poetry, in 2004.
During the last years of his life, Crosson was beloved by Los Angeles innovative writers for his eccentric behavior–he was gay and often described in some detail his sexual encounters and experiences to both his gay and straight friends–his unusual sense of humor, and his poetry, which came to be recognized as some of the most original writing of his peers.

The christian name makes impossible
any face-front exchange of plain talk.
The remedy (as I’ve sd before) runs
amok the chittering squirrels on roof-
tops & owls (tail-balanced) hung from
trees. Adjectives kill, or stultify
and, in any case, belabor the room
we so carefully establish. Privacy
hs everything to do with it–topical–
and them day-old sausages brought (un-
wanted) to the door we eat anyway,
threshold and lintel.

You tell me we have five years to
change the language. I wonder what
you mean. Me? Us? Why? And what’s
to change? Maybe you didn’t say
‘change the language’ but we hd 5
years. My overalls will be washed
fifteen times by then, some shredded
for lawn chairs; the rest abused &
at least one pair given my dentist
as collateral...Poetic endowments
(? To be sure) get me in fistfights
at parking lots.

–can’t remember his name: a distinguished
writer; friend of a Friend who’d once played
tennis with his daughter–his house, a splendid
quarters off Doheny... I was invited guest.
His wife, my younger, went out for a swim.
We share drinks.

“Trouble at The Foundation,” he informed me,
was “Too many ‘pansies’–; glanced at the
manuscript it had taken four years to write–
read the fist page. “Well,” he said, “at
least you’re literate.”
They had a dog–

Just down the street from Stravinsky

–meant read the right magazines.
Made prominent.
Didn’t matter if you had one.
That was protocol.

He sat atop me.

I was thinking of the organist
in Allentown.

He had a sister and a brother-in-law.
His step-sister was a film star whom
I never met. She was mistress of Howard Hughes.
Nights, she would sometime visit the family.

His father (deceased) had once played the violin.
_____

Very camp-gossipy letters
I have lost them.

Boomie was a director.
He knew Elsa: we once spent weekend at the
Laughton peacock-Farm in Palos Verdes.

Elsa (intimitably) maintained that spices should
be put with the pasta, not the suace.
She like watching car-races on TV.

The lover I never dreamed of wouldn’t speak
When I was at the ocean too.
Seaweed and salt and wind
Blew every list away.

Words that would make me laugh now
Snorted bulls and boardwalks
Me. Me. Coins with the head of Ceasar.
Flapping seagulls.
And.

Under a log, left worms and white.
White–until I’m blue in the face
The mirror lit.

Candles. Or stars
Cut to the bone.

Toenails and chairs and elevators.
Faces in back seats. Wet skin.
A corked bottle. Salt
And seaweed.


A green car.
Gone to the moon.
All thumbs and fingers.

A charley-horse was not an erection, but a cramp
in the leg. Men whistled walking by the house. I
didn’t much notice it needed painting.

It was a red house, barn red. One side of it was boarded up, I never went in there. I
imagined it ghostly. I sometimes thought the men were whistling at me. But it was not the
case. The house was wooden, a very old house. I lived with my aunt, who rented the
upstairs. Nights, I tried to imagine what it would look like, but I could not do much with
it. The yard was a mud shambles: nothing could grown there. I could not imagine it a new
house, nor did I want to. It was not in the right place.
The reason it was called The Red Onion was not what I thought. I though it was
called that because it was red–though a red onion is not red, it is purple. I did not like
the men whistling when they walked by. I pretended I didn’t live there.


The Man in the Moon

In this bright-red-paper wading boots,
His well-worn thumbs–:
‘You must be drunker than I thought!’
And dove into the lake.
–Patchen

The way the water shows the hills.
A milky rim–an edge
To this naked guy:
Head-first.

A husky fellow, read–
No sound of splashing; nor
Penetration

Water is a way to think.
Thoughts drink well at noon.

Four is tonic and more fertile.
Five is sometimes marriage–
Sacred to Aphrodite.

Stark failures of the drowned.
Misery like success is infantile–
Feminine, wanting both yes and no.

What comes next, a question in the mind.
Half dozen of the other–
The first perfect number.

Hand in a pale of rum so far from June
it makes one want to dance–
June, an alibi

I feel like I’m wearing a watch:
The hand to the cuff–the Ballpark–
Colorful folk stealing each others’ cars
And suits of clothes they live in (after
Retrieval) or bets on the races:
A world of bookies and fast laughs.

How to nail your hand to a board and drive
Timber to Emergency: how to lose a finger
And (again) pick up the guitar or piano.
How to walk crossroads against the light
And make it fine kettle of fish, having
Lost the sportspage or pooltable left
the backdoor open, or the wife
At her embroidery.

A round-trip to Aussie-land where babies
Are borne to pouches and eat Kiwi–
Aborigines prowling in the bush
This side marbled architecture they
Haven’t shoes to fit: the fix of a smile.
Celebrating.

A child hugging his mother’s skirts.
Where sea is that and stone is a place
Of choirs.

“Lemon,” “The Red Onion,” “The Man in the Moon,” and “Pythagoras”
Reprinted from The Day Sam Goldwyn Stepped off the Train (New York: Agincourt, 2004). Copyright ®2004 Estate of Robert Crosson. Reprinted by permission of Paul Vangelisti.

“The Collar”Previously unpublished. Copyright ©2004 Estate of Robert Crosson. Reprinted by permission of Paul Vangelisti
Posted by Douglas Messerli at 11:34 AM