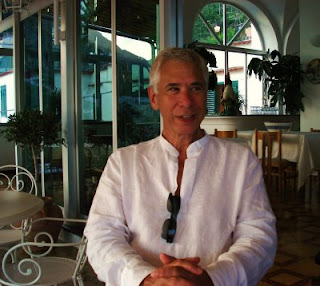 Martin Nakell was born, the son of a CP (Certified Public Accountant), in Alpena, Michigan—a small town on the shores of Lake Huron. His family moved to Southern California when he was 15, and he received his Bachelor of Arts degree in 1971 from the California State University, Northridge, near Los Angeles. He received his M.A. in Creative Writing in 1974 from California State University in San Francisco and his Doctor of Arts from the State University of New York at Albany in 1983. Upon graduating from Albany, Nakell became a Professor of English and Comparative Literature at Chapman University in Orange, California, where he continues today.

Nakell begin writing in the 1960s, publishing in numerous journals, but was dissatisfied with his own writing until much later. His first book, The Myth of Creation, was published by Parentheses Writing Series in 1993. In 1997 Sun and Moon Press published his short fiction, The Library of Thomas Rivka, and in 2001 Green Integer/EL-E-PHANT books published his long novel, Two Fields That Face and Mirror Each Other, to literary acclaim. Other works of fiction include Settlement (2008), Monk (2009), and The Lord of Silence (2016).

Nakell’s work is philosophically-based and ruminative in its structures. Often, his poems flow in prose-poetry forms, and commonly, his poems function in a series of sequential writings that consider abstract issues such as “sequence,” “dialogue” and other such concerns.


In Los Angeles, where he lives, Nakell is also known for organizing poetry events and for the publications, particularly that of Leland Hickman, of his Jahbone Press. He has received fellowships from the Fine Arts Work Center in Provincetown, the Blue Mountain Center, and from Writers and Books in Rochester, New York. He has also received grants from the National Endowment for the Arts, Chapman University, and the University of California.

ubiquitous.
two very decent gentlemen
in a sun chessboard
object born of a mind
first one sighs
the other sighs
a chessboard in a sun struggles
each has a thought which he struggles with
and of course wins, conquers
or that they are on the same side, team,
work together for the sake of

oars
in the same sun molecules
on a salt body of water
salt as
some ubiquitous.

but these two are italians
no, actually puerto ricans, shopkeepers
with good shops so there’s no going home

the chessboard of course has long since resolved its
struggle
fingers curl over the absence of oars and water, water in
each country

the molecular structure of the act of change is a
constant

sunlight falling through the translucent chessboard
leaving the hands of the gentlemen placed upon the
dissolving notion,
historically, of the city-state, of the country-state
of the state

except that one yawns, a deficit of oxygen
and the dictatorship of boredom
and the return of a thought not to be conquered:

I tried to imagine her thoughts. I imagined her
thoughts. I crossed
that imperial boundary among the bombardments,
ubiquitous,
of a real world. I came home with my bounty: the
absence of an ideal self.
ever present but not omniscient: the water.
omniscient but absent: an adam and an eve, or certain
figures and a motif, recurrent throughout musics

The park was like a garden in an old country. We played chess there
each afternoon meeting each other. When the war came we persisted,
although, of course, then we had to stay inside. My companion was a
brilliant interior carpenter who had built himself an excellent library, and
so we played chez toi. I love it when I know even one phrase from another
language, as though language were something ubiquitous, falling
from a sky like rainwater into my old mouth. He is more intelligent than I,
who am only a shopkeeper. Though I read through some of his books, now
that I’m alone, and I beat him often at chess not because I’m more bold,
and actually I don’t know why. Since we left Lebanon, a Paris of the Middle
East older than Paris if you want to know

to have been a seaman
to have sat at the oars of the longboat
to have seen the waters evaporate
to have continued, at your oar
to have looked around
to have had the idea to call some thing by its name
to have known that you were one of the symbols

Questions from the Gates

in that one is return
two is familiarity

Where were you today?

Did you go in?

What were they talking about
at the gates today?

The weather. And waiting.

Where were their hands?

Where were their eyes?

What did you see?

Cumulus clouds, though the sky
was temptingly pale, transparent blue
in the open spaces between

What else did you see?

I saw the gates, those iron
vertical bars open
and close.

Did they stay open for long?

I don’t think
they were open at all.

But you said you went in?

I thought I went in; there were
times I thought I was on
the other side, and someone
kept calling me to come out.

Someone with eyes
like my own: startled, that is,
brown eyes.

Were they in his hands
in his pockets?

No. He kept looking at me.
He kept saying to me,
come bout before those gates
close.

Why didn’t you stay?

What was happening inside
the gates?

Many things. A man…

…legs, he was digging for something
inside his legs.

Did you go in far?

Yes, I went in
very far.

Did you see me there?


Yes, with my eyes
in my hands, holding them up
so they could see.

Were you actually inside the gates?

Did you put your eyes
back in your pockets
like the rest of them?

No. I put them back
where eyes come from.

Because I had to come back here
to see you, to talk to you
about things.

Would you go back?

You mean inside those gates, where we both have been?


is idea
plus essence or

So rich in that part of that city.
Idleness to approximate sensual
sloth’s seaside argument.

Two sparrows in a pepper tree,
Hawk-eyed, hung light-footed, hungriness,
indulge in the dearth of indifference.

Aesthetic’s muscular labor
The voice of that vendor: Potatoes!

Or that most days after work they come home,
then walk by the uneven shore
so that much later they might sleep well
under open windows.
Or if not, she would say,
Bring me down into sleep with you,
and he would say,
abandon to other shapes, insolid also.

That corruption causes individual consequence.
The exercise even of small power.
It’s not an aphrodisiac,
but arises from a mark of ordinary fear, causes a sense of safety.

Or the shape of an aesthetic labor taking shape

PERMISSIONS
“ubiquitous”
Reprinted from The Myth of Creation (San Diego: Parentheses Writing Series, 1993). Copyright ©1993 by Martin Nakell. Reprinted by permission of the author.

“Questions from the Gates,” and “Sequence of Forms Six”
Reprinted from Form (New York: Spuytin Dyvil Press, 2004). Copyright ©2004 by Martin Nakell. Reprinted by permission of the author.
Posted by Douglas Messerli at 12:03 PM