Martin Camaj was born in Temali in the Dukagjin region of the northern Albanian alps. He is an émigré writer of significance both for Albanian literature and for Albanian scholarship. He received a classical education at the Jesuit Saverian college in Shkodër and studied at the University of Belgrade. From there he went on to do postgraduate research in Italy, where he taught Albanian and finished his studies in linguistics at the University of Rome in 1960. From 1970 to 1990 he served as professor of Albanian studies at the University of Munich and lived in the mountain village of Lenggries in Upper Bavaria until his death on 12 March 1992. Camaj's academic research has concentrated on the Albanian language and its dialects, in particular those of southern Italy. 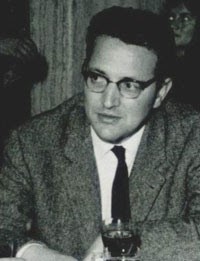 His literary activities over a period of forty-five years cover several phases of development. He began with poetry, a genre to which he remained faithful throughout his life, but in later years also devoted himself increasingly to prose. His first volumes of classical verse Nji fyell ndër male, Prishtina, 1953 (A flute in the mountains), and Kânga e vërrinit, Prishtina 1954 (Song of the lowland pastures), were inspired by his native northern Albanian mountains for which he never lost his attachment, despite long years of exile and the impossibility of return. These were followed by Djella, Rome 1958 (Djella), a novel interspersed with verse about the love of a teacher for a young girl of the lowlands. His verse collections Legjenda, Rome 1964 (Legends) and Lirika mes dy moteve, Munich 1967 (Lyrics between two ages), which contained revised versions of a number of poems from Kânga e vërrinit, were reprinted in Poezi 1953-1967, Munich 1981 (Poetry 1953-1967).

Camaj's mature verse reflects the influence of the hermetic movement of Italian poet Giuseppe Ungaretti (1888-1970). The metaphoric and symbolic character of his language increases with time as does the range of his poetic themes. A selection of his poetry has been translated into English by Leonard Fox in the volumes Selected Poetry, New York 1990, and Palimpsest, Munich & New York 1991.

When I die, may I turn into grass

On my mountains in spring,

In autumn I will turn to seed.

When I die, may I turn into water,

Will fall onto the meadows as rain.

When I die, may I turn into stone,

On the confines of my land

May I be a landmark.

The ox's skull bursts by the stream.

(Today there will be great feasting!)

The wailing of men gone wild

Mingles with the smell of meat on the fires.

And the autumn foliage falls

Scorched on the white caps

At the tables, outside.

Night. At the graves on the hill

The wolves have descended from the mountains

And drink blood at the stream.

The Canon of Birds says:

Every bird shall stretch its wings and perish on the grass,

Punishment for having plied the forbidden border

Between heaven and earth.

A bird languishes upon the lawn, at death's door,

The leaves in the trees are

Frolicking in the sunlight.

In the distance are two millstones pounding

At one another, as is their wont,

Of a dry leaf,

Wait for me at the end of the earth

With no chrysanthemum in your hand.

With wings o'er the waves, for my breath

To soar to the heavens,

When the guest entered the house at dusk,

As if he were walking over their heads and not

Over the dry floorboards.

Nor did they, as ancient custom demands,

Greet and speak with him, but stared at the ground.

The youngest of them broke the silence,

Removed the lahuta from its place

And laid it in the guest's lap for him to play.

When he held the lute's body,

Gently stroking its side

With his rough fingers,

And plucked its foal-hair string with his thumb,

The brothers and the old man, head of the household,

Understood that the stranger was a singer

The beginning holds the heart in sway,

Not the end of the song.

To a modern poet

Your road is good:

The Parcae are the ugliest faces

Of classical myths. You did not write of them,

But of stone slabs and of human brows

Covered in wrinkles, and of love.

Your verses are to be read in silence

And not before the microphone

Though under seven layers of skin

Though under seven layers of skin.

The shepherds abandoned the alpine pastures

For the warmth of the lowland valleys,

Sauntering down the trails, talking loudly

About women and laughing

Beside the water of the stream bubbling forth

From well to well.

The old deer raised its head from the scorched earth

And observed the pale foliage. Then

It departed to join its sons,

They too with their minds on the does.

Broken, it too abandoned the alpine pastures and followed

The merry murmur of the stream below, a fiery arrow,

The wanderer in search of warmer pastures and winter grass

Which it will never touch!

When they slew it, the shepherds pried its eyes open

And saw in the pupils

The reflection of many deer drinking water from the stream.

(To the tribes below the Drin)

There opens a gorge leading down to the river,

Formed as if it had been a lake,

And we were out there alone, on it, still,

In dugouts of maple.

We used to know by heart

The names of choice fish and not

Of preying birds and wild

Even the sheen in our eyes

Would be blue and not black.

We would float in the water

Not in the clouds.


Posted by Douglas Messerli at 1:02 AM