Alfred Kreymborg was born in 1883 in New York City, the son of a cigar-store owner. The last of five children, Alfred was educated in public schools on the east side of Manhattan. By the age of ten Kreymborg had become a master chess player and by teenage was competing in state tournaments, ultimately tieing the world champion José Capablanca. He also played the mandolin and, upon graduation and a series of clerical jobs, he found position as a salesman for a maker of music rolls for player pianos. Learning to play the piano, he became interested in the classics, and desired to compose. However, without formal training, he could not compose a symphony, and determined to write a symphony in words instead.

“The Symphony of Love” was written when he was eighteen, and over the next years Kreymborg wrote numerous fictions and prose poems. In 1905 Guido Bruno published Kreymborg’s first literary work, Edna: The Girl of the Street, a fictional account of an experience with a prostitute. The publisher was taken to court on charges of obscenity, and the book gained the attention of figures such as Bernard Shaw and Frank Norris; ultimately, Bruno was acquitted. 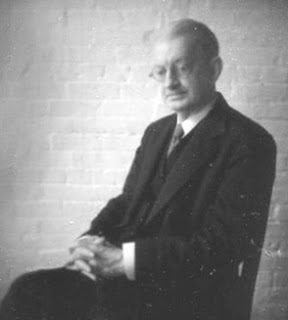 During the following decade, Kreymborg wrote another short novel, Erna Bitek, and continued to write poetry, meeting several of the village “Bohemians” and, through the artist Marsden Hartley, coming into contact with the art work through the group connected with Alfred Stieglitz’s “291” galley. In 1913 he gained acquaintance with several figures of that group, including Charles Demuth, Edward Steichen, and Man Ray, as well as the brothers Albert and Charles Boni, who were about to launch a new publishing house from their Washington Square Book Shop. Ray suggested to Kreymborg that the two of them begin their own journal in order to introduce several of their friends to a wide audience.

Meanwhile, Kreymborg published his first book of poetry, Love and Life, and Other Studies in 1908, and, experimenting with new techniques, published two poetic sequences, “Mushrooms” and “To My Mother” in the Bruno Chap Books in 1915. The following year, John Marshall published both sequences as Mushrooms: A Book of Free Forms in hardback. Moreover, with the financial assistance of Walter Arensberg, Kreymborg began a new literary magazine in 1915, Others, which caused a stir in the literary world for its experimental writing. Meeting with the poets of the pages, Kreymborg introduced numerous American and European writers to each other, including William Carlos Williams, Wallace Stevens, Harriet Monroe, Carl Sandburg, Edgar Lee Masters, and Sherwood Anderson.

Word of these literary activities spread, luring writers such as Maxwell Bodenheim (who lived in Chicago) to New York.

In 1916, the Provincetown Players, at John Reed’s insistence, produced one of Kreymborg’s verse plays, Lima Beans. His second book of poetry, even more experimental in nature, was published as Blood of Things in 1920. His own Others Players, produced another of his plays, Manikin and Minikin which played on the same bill with Edna St. Vincent Millay’s Jack’s House. The company soon disbanded, but Kreymborg published a collection of short plays, Plays for Poem-Mimes. 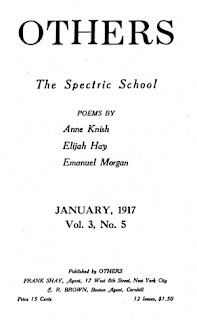 Others ceased publication in 1919, but he brought out a third Others Anthology in 1920, the year when the wealthy Princeton figure, Harold Loeb, invited him to edit Broom, a magazine of arts published in Rome. In 1921, the Kreymborgs sailed to Europe. In Paris, he met with Pound, Jean Cocteau, Constantin Brancusi, Tristan Tzara, and Gertrude Stein. Richard McAlmon arranged for him to briefly meet James Joyce. In 1921, the first issue of Broom appeared with various American and European authors. But Kreymborg quit the journal after only four issues, arguing with Loeb over to what extent of European authors should be featured. He and his wife toured Italy, and Kreymborg returned to writing, this time composing various blank narratives and experiments in the sonnet form.

The couple continued to travel throughout Europe throughout the 1920s, and by the latter half of the decade, Kreymborg had published two more volumes of poetry, The Lost Sail (1928) and Manhattan Men (1929), as well as a history of American poetry running from the colonial times to Hart Crane. With Paul Rosefeld, Van Wyck Brooks, and Lewis Mumford, he began a series of five anthologies, The American Caravan, which was highly influential for poets through the next few decades.

The stock market crash of 1929 and a series of poems titled “The Economic Muse” reveal Kreymborg’s growing persuasion that the poet had to speak out politically on contemporary issues. For much the rest of his life, Kreymborg did so, in works such as the radio play The Planets and his patriotic and pacifist poem series “Arms and the Armageddon,” published in his Selected Poems of 1945. His last work of poetry, No More War, and Other Poems, was published in 1950.

Purple iris in the green bowl:

You ought to be brown.

Flecked with three or four

And not quite so stately—

you and the green bowl

That broom is much bigger than you.

Then don’t put it down.

Hen Being / from Zoology

Being cooped in a crate,

cooped in a crate,

as one is cooped in crates

of the filthy, stinking Chicago River—

being cooped in a crate

with more hens than a crate can hold,

is not an existence

but it gives one a sense of safety,

is this being yanked by the neck,

yanked by the neck,

yanked by the neck,

by a common, filthy, stinking

of the filthy, stinking Chicago River,

from one crate to another

one crate to another.

and I’m an old hen, if you please,

There’s ever the hope in a hen like me

that the next crate

will be one’s last,

so that this being slammed

from one crate to another,

will reach a cadence.

I’m an old hen, if you please,

and I can endure

of the filthy, stinking Chicago River

of the filthy, stinking Loop of Chicago, Illinois,

but wring my neck ere my time

if I don’t squawk for all hens

when I affirm that this

is no lop forward

but a hop backward from

being cooped in a crate.

Being cooped in a crate,

though it’s only one’s neighbor,

and one is sans claws,

sans even a feather,

to scratch her with!

the God of hens!

in fear of just two;

in fear of just one;

then hoarding one penny,

in fear of the zero,

as round in its emptiness,

as bodies are all

Whether winds chase the clouds,

or clouds chase the winds;

whether shadows the grasses,

or grasses the shadows;

which part of the circle

into the air, and he fell,

a moth blind with stars,

hand of man, feet of bug:

fail not to turn him, if

you would have both of him,

undermost, equal to, if not

as cleanly as uppermost:

We are not his eyes.

We do not see.

We do not see grain,

we do not see people,

we do not see people gathering grain,

we do not see cars,

we do not see tape,

we do not see figures—

gold is what we see.

We are his eyes.

I could hang him to the hottest, saddest tree in Hell,

I’d crawl up beside him through the bark turn to, bark

turn to thistles and thorns,

and strange me with his wild, wild beard till my dead

The lady wears the mildest of blue eyes.

Receives every Friday at five.

Sips tea as you or I sip tea….

But her cheek bones are high,

after the Polish fashion,

she has been reading

You would take me,

in your huge paws

I can take you,

Posted by Douglas Messerli at 2:23 AM

Thanks for these! I think they contrast appreciably with WCW's Kreymborg whose "idea of poetry is a transforming music that has much to do with tawdry things" (Preface to Kora in Hell).