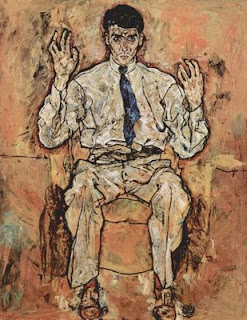 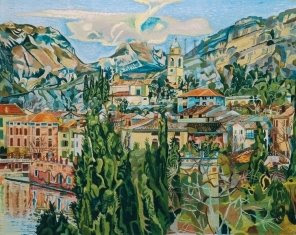 Born as Albert Conrad Kiehtreiber, Albert Paris Gütersloh was born in Vienna in 1887. He began his career as a artist, working for a while under the famed stage designer Max Reinhardt. At 27 years of age, from 1914-18, during the First World War, Gütersloh worked in the official Press Head Quarters in Vienna.
After the war, continuing his interest in art, he became a professor at the Kunstgewerbeschue, living for a time as a roommate with the later famed Austrian novelist, Heimito von Doderer. Forced out of office in 1938, Gütersloh joined the faculty of the Vienna Akademie der Bildenden Künste and contributed to the magazine Die Aktion.
During these years, Gütersloh had also begun writing fiction, publishing Die tanzende Törin in 1910 (revised in 1913), Innozenz oder der Sinn und Fluch der Unschuld and Der Lügner under Bügern, both in 1922, winning the Fontane prize in 1923. Gütersloh's major novel, however, Sonne und Mond. Ein historischer Roman aus der Gegewart was not published until 1962. It was followed by Die Fabel von der Freundschaft. Ein sokratischer Roman in 1969, and several collections of short fiction. His only volume of poetry, Treppe ohen Haus oder Seele ohne Leib. Späte Gediche, was published posthumously in 1974.
Gütersloh is seen today as a somewhat eccentric writer, whose style was richly ornate, often described as having a kinship with the Baroque.