Pasolini's youth was spent in northern Italy, his father's military career necessitating several moves throughout the region. In 1937, he returned to his native city of Bologna, where he enrolled at the University, studying literature and art history. It was at this time that he began to write poetry in Friulian, a Rhaeto-Romanic dialect. His first book of poetry, Poesie a Casarsa, was published at his own expense in 1942.

The next year, the family moved to Casarsa, the subject of his previous book and the birthplace of Pasolini's mother. There Pasolini's interest in poetry grew, and he continued writing, both in Friulian and in Italian. In 1949 his mother and he moved to Rome, where he remained the rest of his life. 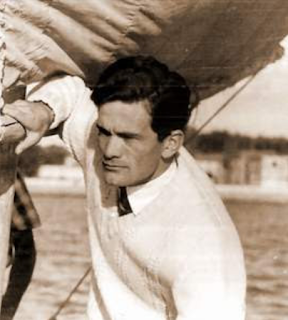 Pasolini's poetry reflects his personal interests and concerns: his work is particularly infused with a sense of the poverty and joy of the working classes and his love for them. The protaganists of poetry and fiction─and often of his films─are Rome's uneducated youths, forced to live apart from and alienated by the bourgeois.

However, Pasolini's Marxist positions were highly personalized, primarily because of his homosexuality, expressed openly in much of his work. At the same time, his life, particularly when he began making motion pictures in the 1960s, pulled him further away from the poor, with whom he so identified. Pasolini explored these issues intensely in his films and his works of poetry and fiction such as L'usignolo della Chiesa Cattolica (1958; The Nightingale of the Catholic Church), Ragazzi di vita (1955, The Ragazzi) and Una vita violenta (1959; A Difficult Life).

In 1975 Pasolini was murdered by a young man, whom he had evidently picked up for a homosexual encounter. The incident was internationally reported, with some parties suggesting that Pasolini had been murdered for political reasons.

For a reading in Italian with Pasolini and Ezra Pound, click here:

from A Desperate Vitality

(Draft, in progress, in current slang, of

what's gone before: Fiumicino, the old

castle, and a first true idea of death.)

As in a film by Godard: alone

in a car moving along the highways

[where Moravia remained, pure among his luggage]

in a sun inexpressible in rhymes

that aren't elegiac, because it's celestial

─the most beautiful sun of the year─

as in a film by Godard:

under that sole still sun slitting

the canal of the port of Fiumicino

─Neapolitan sailors in their wool rags

─an auto accident, with a little crowd around it...

of romanticism in the seat of

on the road from Fiumicino,

and there's the castle (what sweet

mystery for the French screenwriters

in the troubled, endless, centuries-old sun,

this papal monster, with its crenelations

above the hedges and vine rows of the ugly

crushed by a truck's tires,

hanged by boys to a fig tree,

but still with at least eight

a snake reduced to a bloody pulp,

arms skinny as a child's,

who "at the wheel of his Alfa Romeo"

within the logic of the narcissistic montage

detaches himself from time, and inserts in it

in images that have nothing to do with

the boredom of the hours in a line,

the slow splendid death of the afternoon...

in not being able to communicate

but in no longer being able to be understood.

And this papal monster, not devoid

the rustic condescensions of patronage,

which were innocent, in the end, as the serfs'

in the sun that was,

for thousands of afternoons,

here, the only guest,

crouched among poplar groves and marshes,

by buttresses the sweet orange color

is at the point of no longer being understood.

(Without a dissolve, in a sharp cut, I portray myself

she in front of me, on the couch:

shot and countershot in rapid flashes,

"You"─I know what she's thinking, looking at me,

in a more domestic-Italian Masculine-Feminine,

the cobra in the light wool sweater

(and the subordinate cobra

Then aloud: "Tell me what you're writing?"

poems she wouldn't understand, lacking as she is

poems no longer in tercets!

This is what's important: no longer in tercets!

I have gone back, plain and simple, to the magma!

been kicked out on the street

and citizen [another boo-hoo]."

And the cobra with the ballpoint:

[He speaks softly now, as though intimidated, assuming

the role the interview, once accepted, imposes

on him: how little it takes

for his sinister mug

the face of a mama's boy condemned to death]

[And here he rears up, regaining

the dignity of civil hate]

of a jumbled octosyllable: magmatic!]

It is not in not communicating [death],

but in not being understood...

(If she only knew, the cobra,

that this is a tired idea

concocted coming back from Fiumicino!)

They're almost all lyrics, whose composition

in time and space

meditations from forty to eighty miles per hour...

with quick pans (and dollies

following or preceding them),

over significant monuments, or groups

an objective love...by the citizen

who is it that doesn't understand?"

"Those no longer among us."

Those no longer among us!

Lifted, with their innocent youth,

by a new breath of history, to other lives!

I remember it was...because of a love

that invaded my brown eyes and honest trousers,

the house and countryside, morning sun

and evening sun...on the good Saturdays

even utter that word of virgin

passions, of my death (seen in a dry

ditch swarming with primroses, between

vine rows stunned by gold, next to

I remember that in that monstrous love

I nearly screamed in pain

for the Sundays when the sun must shine

"above the sons of the sons!"

I was crying, in my narrow bed, in Casarsa,

in the room that smelled of urine and laundry

on those Sundays with their dying glow...

Incredible tears! Not only

for what I was losing, in that moment

of heatrending immobility of splendor,

but for what I would lose! When new

young me─of whom I couldn't conceive,

with a flower in the buttonhole, or in dark

cloth, for weddings, cared for with filial kindness

unchanged, with its stones, and its sunlight

covering it in golden water...

Through an epileptic impulse of homicidal

grief, I was protesting

without anybody else knowing,

to scream, mouth stuffed with

the blankets darkened by

the burns of the irons,

the dear blankets of the family,

on which I was brooding over the flowers of my youth.

And one afternoon, or one evening, I ran,

through the streets of Sunday, after the game,

to the old cemetery, there, beyond the railroad tracks,

and performed, and repeated, till I bled,

the sweetest act of life,

I alone, on the little pile of earth,

the graves of two or three

no names on the wood-plank crosses

─buried there since the other war.

And that night, amid my dry tears, the bleeding

bodies of those poor unknowns

appeared in a cluster above my bed

where I was sleeping, naked and emptied,

to smear me with blood till the sun rose.

I was twenty, no, less─eighteen,

nineteen...and a century had already passed

since my birth, an entire lifetime

consumed in the pain of the idea

that I would never be able to give my love

except to my hand, or the grassy ditches,

or perhaps the earth of an unguarded grave...

Twenty years, and, with its human history, and its cycle

of poetry, a life had ended.

─Translated from the Italian by Norman MacAfee

Posted by Douglas Messerli at 1:55 AM

Through fragilities we reach one another.
Leonardo’s definition of an arch:
“Two weaknesses that fall together to become a strength.”
If we never fell, those meant to catch us might never discover their power.
Around our body-islands, identity’s ocean swirls,
wave upon wave of infinite information
tugged into fury by our negligence.
Death is not a drought of moment—but a flood of eternity.