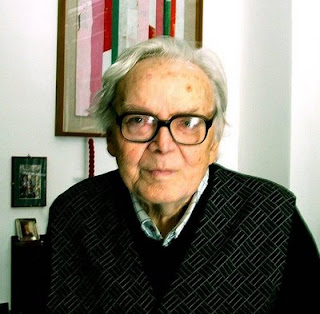 Born in Viserba in 1927, the son of a persecuted socialist, who worked as a coachman for summering tourists on the Rimini coast. Pagliarani's inability to make friendships with the children of the wealthy, instilled him a hatred of the rich. An exception was Giovanna Bemporad, the child a wealthy publishing family, who herself wrote poetry and encouraged the young Elio to write as well. The loss of an eye in childhood, and his witnessing of the death of a young man in the hands of Germans in World War II, along with the injustices he observed in Milan, where he worked for an import-export firm, led him further away from bourgeois culture. Soon after graduation in 1951, he joined the editorial staff of Avanti!, the socialist party daily newspaper.
Unable to relate to the neorealist "partisan poetry" and neorealism in its many other forms, Pagliarani turned instead to T. S. Eliot─whose "The Waste Land" stuck him deeply with its linguistic complexity─and to the Italians Cesare Pavese and Pier Paolo Pasolini. Accordingly, Pagliarani developed what he described as a "critical" realism, in order to create a dialectic for new social values and for creating a new poetics. Ultimately, he expressed many of these views in "Intervento" of 1959, collected in the Gruppo '63 anthology of 1966. In 1961, he joined poets Alfredo Giuliani, Edoardo Sanguineti, Nanni Balestrini, and Antonio Porta in the highly influential I Novissimi anthology, a work which helped to change the course of Italian poetry.
Among Pagliarani's major works are Cronache e altre poesie, his first book published in 1954, Inventario privato (1959), La Ragazza Carla e Altre Poesie (1962), Lezione de fisic e Fecalaro (1968), and Rosso, corpo, lingua (1977). Increasingly, over the years his poetry has grown more and more hermetic and linguistically complex.
Pagliarani died on March 8th, 2012.

You had the legs of a pregnant mare
and tringy hair, your forms
made by a carpenter I struggled
sure of remaking them, imagining
a turgid richness if I took you nipples
in my teeth. You looked good
dressed like a sailor, white and blue.

I wrestled ont he sand to open you up
and resolve a dobut for you, underwear
with popular flounces.
Lord Knows what
I thought I'd see, in her restless
eyes.
If this were sin!, come on,
illusion of age, what leaves its mark
is the lie: life having been declared
grand, here I am to bend my back
and say: it's strange it's strange, as a goose.

I realize that instead of drowning
I used you as a life-preserver.

Here where there's a break in the sea, no memory
remains, and if treachery seizes me
from the depths, it's the night the clearness
marriage sea moon in these low
lands, it's Villa Serena so empty,
silence, dismay at the threats
of the dawn.

—Translated from the Italian by Lawrence R. Smith

It's somehow like saying there's not much left to burn, by now,
the blimp's defeated, the skeleton so bare
it's frightening
I had what it takes to turn out badly,
wicked love, talent plus a modest ambition
and if need be a hole in my pants
to slip two fingers through
and so we shall burn iron posts
our up-to-date country, the dredge the crane the seaplane harbor

But if:
cowardly and unyielding I struggled
meal after meal, and I will not let go

after the rain with toads in the streets
I trust you will find me.

O, we are the race most tenacious, praised be its creator,
man's the only animal to winter at pole and equator
lord of all latitudes accustomed to all habits,
thus my confidence is fierce
no matter how I say it—ah the endless range of tones
equal only to throngs of sensitive souls to earth's stenches
my confidence is fierce, no matter what, you can find me in the storm
and later, when the trolley tracks are up in the air.


No? What happened, an accident? Glory be to you, if your turn hasn't come
I anyway delivered a note—it says I don't give up:
amen to me, the time my turn will come.


______________________________________________________
The praise of powers of adaptation and resistance typical of mankind
bears with it a polemical attitude toward sensitivity (and here it is
primarily the sensitivity of the reader accustomed to the refinements of
poetry): the possible "tones" of experience are endless, so that the author
combines violence with trust and assumes a certain stylistic casu-
alness ("no matter how I say it")—the very coaseness he needs if he is
consciously to shoulder his baggage.
And if an accident occurs? Lucky you, whoever you are, if you manage
to escape the "storm"; meanwhile the poets don't give up their work.


-Translated from the Italian by Luigi Ballerini and Paul Vangelisti


(from La ragazza Carla e altre poesie, 1962; as it appeared with notes
in I Novissimi)

At the Beach There Are No Colors

The sea is discreet the sun
makes no noise
the horizontal world
is without quality
Sustance
is indifferent substance
preceding
the quality of inequality.

—Translated from the Italian by Luigi Ballerini and Paul Vangelisti

Talk to Sagredo: so much per kilo we sell and these people cost
it's the phrase that gives him away, tomorrow at the harbor beach. I found him
in friar's sandals and a long white meerschaum in his mouth
I'm sending false signals, he said, and greatly praised the chastity of woman

Mixture of gunpowder according to Roger Bacon
chalk, cheese, sand from the Tago and philosophical eggs

Here it is siimpler silnce there is no reason, the motive is existence, and I decided to
kill Sagredo.
Who sent you he asked me when there were the black women and Pierraccini, I told
the first lie that came to mind
he said it's a lie I don't give a damn don't tell me you believe in a secret life, and the
girls laughed when he pulled down his pants. Pieraccini
was immediately out of key, first he pretended to leave then he too began to undress
but Peggy called him an asshole and Molly said you're disgusting in so manywords.
In effect he was as disgusting
as Sagredo was clean
and I dediced to kill Sagredo.


—Translated from the Italian by Luigi Ballerini and Paul Vangelisti

let's try again with the body: body, a circle around it, then body on body: Nandi, if
we had
on the body a bundle of bodies a degree seven degress of body if they had
a spot straddling the body, that makres the triangle, fickle spot on bodies
caught in the bundle of bodies, that follows the edge of the triange, overflowing
the body
in time, it spreads over the time of body, over the body hollowed by time
down to the bone marrow
time of the body in the tangle of plexus, having, Nandi, body and body's breath in
the course of time
in the breath of wind, body in the body, flower of body on the stalk of body in the
forest
of body on the beach of bodies where the wind smells only of body
too much body Nandi or too many words on the body or body dismayed by the
body?

let's try again with the body, why circle? no circle around it, body on body
there is acircle: body, body


—Translated from the Italian by Luigi Ballerini and Paul Vangelisti

Among the Finales of Rudy's Ballad

Drugs weren't enough, now there's this anorexia, or bulemia whatever
No, not the same thing? the opposite? one kills the other fills you up
Anorexia doesn't mean not being hungry but saying you're not hungry
hvaing so much in your gut, and goose bumps of envy for not being
like others, but like the Nibelungs in fact the Niebelungesses because
it especially strikes
girls and how many have learned diligently from the gorgers of ancient Rome
the art of vomitting to destroy yourself: this is like drugs, the rich
with money and effort more often get off, the poor don't fare so well.
(In parenthesis?: at the start of this tale if there were a strange
girl without apparent reason it had to do with reducing almost
always the concetration
camps, from what camps come the reducing now?)
—Translated from the Italian by Paul Vangelisti