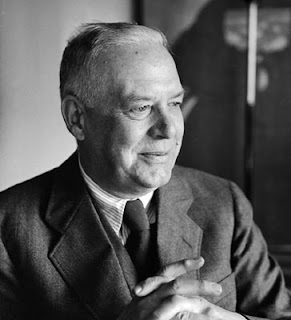 Born in Reading, Pennsylvania, Wallace Stevens was the second of five children of a lawyer father and a mother who had been a former schoolteacher. Stevens’ upbringing in this middle-class, Presbyterian, bible-reading family was quite conventional. He played football, was educated in the classics, and graduated in 1897, the same year as his brother.

Stevens attended Harvard University as a special student, allowing him a reduced tuition but no degree. While there he began writing fiction and poems for the local campus magazine, and in following years he was elected president of the Harvard Advocate, the literary magazine. While at Harvard, Stevens also encountered the noted philosopher-poet George Santayana, with whom he met several times and with whom he shared some of his poetry.

Leaving Harvard in 1900, Stevens was intent to become a writer. In New York he worked briefly for the New York Tribune and then as an editor at World’s Work. His father, however, strongly disapproved of his literary aspirations, and under his pressure, Stevens entered law school in New York in 1901, from which he graduated two years later. For the next thirteen years Stevens continued living in Manhattan, working in a legal capacity and regularly attending literary salons and readings that included figures such as William Carlos Williams, Marcel Duchamp and the composer Edgard Varèse. His career seemed to go adrift, as he moved from one law firm to another and worked at four different insurance companies. However, he continued to write poetry, composing many of the works that would make up his 1923 volume, Harmonium.

In 1909, after a long courtship, he married Elsie Viola Kachel Moll, but the relationship was tempestuous at best. In later years, they lived separate lives in their Hartford, Connecticut home.

In 1916, Stevens found himself unemployed and was forced to leave New York to take a position at the Hartford Accident and Indemnity Insurance Company in Hartford. During these years, Stevens worked his way up in the company, gaining substantial financial success, but his interchange with contemporary authors shifted as he became more isolated and reclusive.
Harmonium was not a financial success, but contained some of this most outstanding poems of any first publication by a poet. Among the works in this volume were the noted poems “The Snow Man,” “The Emperor of Ice-Cream,” “Sunday Morning,” “Anecdote of the Jar,” “Peter Quince at the Clavier,” and “Thirteen Ways of Looking at a Blackbird.”

He did not publish his second volume, Ideas of Order, until twelve years later, in 1935. Over the remaining years of his life, Stevens published essays and poetry at regular intervals, and late in his life, won several prizes, including the Bollingen Prize in 1950, National Book Awards in 1951 and 1955, and a Pulitzer Prize in 1955. The same year as the Pulitzer, Stevens was diagnosed in incurable stomach cancer, and died August 2nd in Hartford.

Posted by Douglas Messerli at 8:29 AM