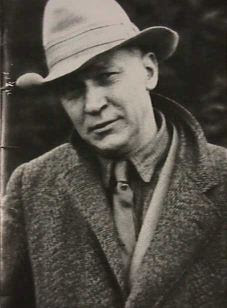 Born in Springfield, Illinois the hometown of Abraham Lincoln, Vachel Lindsay was the son of a Scottish doctor in prosperity, living across the street from the governor’s mansion. His mother was a fundamentalist Christian, given to mystical visions, which would influence much of the Christian-based poetry of her son.

Lindsay studied medicine for three years at Hiram College, but dropped out in 1900 to learn drawing at the Art Institute of Chicago, where he met the famed American artist Robert Henri, who encouraged him on the route of poetry.

For most of his early years, Lindsay lived in such deep poverty that he even attempted to sell his poems door-to-door for enough money to eat. Soon after he embarked on a “tramp” journey of the South, begging for food and lodging. Returning to his Springfield family home, he was determined to embark upon what he described as a “New Localism,” a poetry that would encourage each American locality to support their local talent. Later, with Carl Sandburg and Edgar Lee Masters, Lindsay would achieve a kind noted localism in what critics described as the “Middle Western School,” which found its best expression in poetry written from 1915 to 1925.

Lindsay’s first major work was solicited by Harriet Monroe of Poetry magazine; the poem he sent, “General William Booth Enters into Heaven” made him famous, and led him to a career at performing this poem and other later ones, collected in The Congo and Other Poems of 1914. Just as the Beats, Cowboy poets and performance artists of today, Lindsay presented his poetry as a kind of vaudevillian performance, replete with choruses and musicians. Lindsay also wrote one of the first serious books of film in 1915, The Art of the Moving Picture.

During the 1920s, continuing to live in Springfield, Lindsay briefly courted the poet Sara Teasdale before marrying, in 1925, Elizabeth Connor. By the end of that decade, however, his popularity had seriously waned. At the same time, his epilepsy, which he had previously kept secret, grew more serious. In 1931 he killed himself by drinking a bottle of Lysol.

Today much of Lindsay’s poetry seems outrageously naive, the writing seeming at times to have more to do with popular lyrics and a circus-like atmosphere than with serious modernist achievements. However, Lindsay’s incorporation of music, particularly jazz, and his interest in African-American rhythms of speech and music, alongside his incorporation of a Whitman-like populism, has continued to make his work of interest to some readers and critics.

(Bass drum slower and softer)
Booth died blind and still by Faith he trod,
Eyes still dazzled by the ways of God.
Booth led boldly, and he looked the chief,
Eagle countenance in sharp relief,
Beard a-flying, air of high command
Unabated in that holy land.

(Sweet flute music)
Jesus came from out the court-house door,
Stretched his hands above the passing poor.
Booth saw not, but led his queer ones there
Round and round the mighty court-house square.
Yet in an instant all that blear review
Marched on spotless, clad in raiment new.
The lame were straightened, withered limbs uncurled
And blind eyes opened on a new, sweet world.

(Bass drum louder)
Drabs and vixens in a flash made whole!
Gone was the weasel-head, the snout, the jowl!
Sages and sibyls now, and athletes clean,
Rulers of empires and of forests green!

(Reverently sung, no instruments)
And when Booth halted by the curb for prayer
He saw his Master thro' the flag-filled air.
Christ came gently with a robe and crown
For Booth the soldier, while the throng knelt down.
He saw King Jesus. They were face to face,
And he knelt a-weeping in that holy place.
Are you washed in the blood of the Lamb?

(from General William Booth Enters into Heaven and Other Poems, 1913)
Posted by Douglas Messerli at 9:05 AM