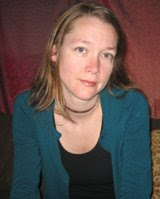 Born in St. Stephen, New Brunswick in 1974, Tammy Armstrong moved to Vancouver in 1992. There she completed a B.F.A. and M.F.A. in creative writing from the University of British Columbia. She worked for fives years as an ESL teacher before moving to Fredericton, New Brunswick in 2005.

Over the past ten years, Armstrong has traveled to nearly twenty countries, which has been an influence on her writing. Her poetry and fiction have appeared extensively in literary journals in Canada, the US and Europe. She has published two collections of poetry, Bogman’s Music, which was nominated for a Governor General’s Award and won the Alfred G. Bailey poetry prize for best unpublished poetry manuscript. Several of the poems also won individual literary prizes.

Armstrong was also the recipient of Canada Council grants and New Brunswick Arts grants. She currently lives in Fredericton where she writes and teaches literacy to physically challenged adults.

Was there a time mid-air to recollect
the years, the women, incorrigible flight
over burnt out trucks, radial tires?

It was never the idea of launching but landing
the ability to strike a pose, let the rhinestones
glitter to envy flashbulb spray.
Ovations in your name
at the lips of every kid with a BMX, oil barrel.

This stilted charade, old man
arc welded between the bourbon and a nap--
nostalgia close-captioned
red, white and blue.

The rest clings:
carefully chosen vistas
out of retirement complexes
a bathroom mirror moment:
feet slipped from kick pegs
but a hell grip on handlebars.

I recently came accross your blog and have been reading along. I thought I would leave my first comment. I dont know what to say except that I have enjoyed reading. Nice blog. I will keep visiting this blog very often.