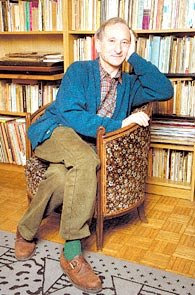 Saúl Yurkievich was born on November 27, 1931 in La Plata, Argentina, where he was educationd and began his literary and academic career. The son of newly-arrived European immigrants, he grew up in a city that was plyglot and a rich cultural mix. Yurkievich has said that in his childhood he heard almost every language of the world spoken.

In the 1950s he joined in the avant-garde movements in Buenos Aires, a city Yurkievich remembers as then "prosperous, accustomed to international exchanges, refuge for European intellectuls and artists, a center, and relatively up-to-date...where everything was still to be made."

His early interest and study of French language and literature led him to Paris in 1962 to complete preparatory stuies for a doctoral thesis (published in 1968 as Modernidad de Apollinaire). That first visits resulted in him meeting Julio Cortázar, with whom he established a close friendship. That close association lasted through Cortázar's lifetime (he died in 1984); Yurkievich serves today Cortázar's literary executor.

In the mid 1960s Yurkievich was appointed professor of Latin American literature at the Université de Paris VIII (Vincennes), a post he still occupies. He has taught and lectured extensively throughout Europe, Latin America, and the United States. In addition to his volumes of poetry, he has published some dozen books of creative prose, literary criticism, and essays, and he is acknowledge internationally as a major figure in the field of contemporary Latin American literature.

For Yurkievich the poet is "a conniver with words, [an] artful trickster," and he sees poetry as something that "unfolds, duplicates, multiplies." Yurkievich died in Paris in 2005.

BOOKS OF POETRY IN ENGLISH


We Are and We Are Not

-Translated from the Spanish by Cola Franzen

English language copyright ©2008 by Cola Franzen. Reprinted by permission of Cola Franzen.
Posted by Douglas Messerli at 8:55 AM