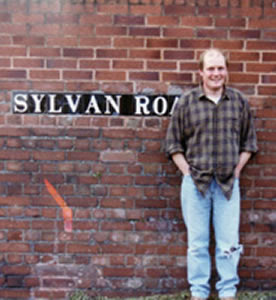 Rupert Loydell was born in London in 1960. He founded Stride magazine in 1982, shortly before starting his degree in creative writing and painting, and just before founding Stride Books (and Stride Cassettes). Between then and spring 2008 he published several hundred titles in Stride’s wide-ranging list of poetry, fiction, and critical texts; the magazine continues online.


Loydell has also edited numerous books, including How the Net Is Gripped: An Anthology of Contemporary American Poetry (1992), A Curious Architecture: A Selection of Contemporary Prose Poems (1996), My Kind of Angel: i.m. William Burroughs (1998), and, forthcoming, Troubles Swapped for Something Fresh: Manifestos and Unmanifestos. He has also done several artist's books. His prose book, Stone Angels: Prose 1979-1993 was published in 1995.

In addition to editing Stride, he is currently Senior Lecturer in English with Creative Writing at University College Falmouth, a widely exhibited painter of small abstract paintings, and a widely anthologised and published poet. [Photo by Geoff Sutton]

Rupert Loydell's Stride publications can reached at this link: www.stridemagazine.co.uk


The sound of your skin, shadows, grief,
and my hair cut just so, surprise you.
I turn around, know exactly who I am
and you know after the mirror tells me
wish again. Kiss it and say encore.
I think I could keep up with you now.
That’s the funny thing about perception,
you can’t see where two worlds touch.
You are the one-who-fights-shadows,
that’s why I walked across your back,
grey and white body refusing to rise,
turning white, silver, the way needs do.
It’s like I’m firing back at the world,
charging more than I could afford –
or so you said sometimes. But I
was hungry among bare branches,
her bed empty at dawn, a hand on me,
asleep, athirst for the world to stop
or pain to speak. No one could say
a poem, someone else will figure it out,
strut away buzzing and booming.
Burn all your notebooks. A small fire
under your pillow opens the heart
up to light and gives it its song.

Held Together with Water
for Alan


My daughter is having a panic attack, midstream,
as her kayak floats away. The wind and the tide
are pushing her where she doesn’t want to be
now the sunshine for our picnic has gone.
I got lost in a box of Lego with the girl next door.
When I am older I want a puppy but the way
will be blocked by rows of raspberry bushes
and angry swans. There are gliders overhead,
guardian angels trying to catch the wind. A table,
adrift in the river, is inches deep in dust. I cut
my finger on the wooden gate when I got home.
“Call me that again and I will break your nose.”
Death called me on my mobile to let me know that
you had fallen off the balcony into intensive care.
The bleeding has stopped but you’re still sedated
while student heartache goes on. This is the week
for final submissions, you’re less pale than before.
We number hurt in sequence as memory pulls apart,
and protect ourselves from damage, dust and wear.
Held together with water, I pull the boat to shore.

The Secret Life of Polemic

An unending stream of deceptive signals,
opinion spluttering like a coffee machine.
You could call it compulsion or vitriol,
a personal crusade or an ongoing debate.
I have spent a lot of time thinking
about argument and have concluded
the opposite is true. Where is meaning,
interpretation, evaluation and expression?
Whisper to preserve my secret: I am
well aware of my own world view.


The Secret Life of My Father

Model trains in boxes in the loft,
local history papers on his desk.
Photos of now-demolished buildings,
a foundation stone from the rubble.
Unreadable notes towards a book
full of not-to-be-forgotten facts.
That day is not yet here. The situation
has changed. My now long-gone father
has turned to tears and remembering,
an awkwardly choreographed embrace.


The Secret Life of the Igloo

The rich future I imagine for myself
is a blizzard of internal monologue
and empty white horizons. Half-blind,
eyes closed against the cold sunlight,
I try to define a presence, wander
between possessions and passions.
But what’s the point, me telling you
about it if you can see for yourself?
On the information superhighway
there is no room for ice or snow.


The House With the Red Door
for Jessica, who asked

Can we go back to the house with the red door?
We must disregard old favourites, learn to forget
the past. It is usually found where there is not
too much direct sunlight, a sudden picture that
was hidden but is still included. No-one was able
to write down things exactly as they happened
but images are preserved with amazing sharpness.
We are surprised by the apparition, the sound
of a wind-up toy in motion, the bustle of mind
in the mouth. It is a time for our words to dance
and our bodies to celebrate spring, time to convince
the children they don’t really miss their last home.
We concentrate on the positive: larger garden, safe
places to cycle, their treehouse, how near the village
is to the creek. Some days we canoe in the rain,
disturbing herons and geese, but when the sun shines
we paddle along to the pub and think how lucky we are.
There is nothing unexpected about these events, except
that they are new, and almost justify moving. What is
the point of this small landscape we have adopted
unless we can call it home? It is a different space
to the city, with different meanings for words like
distance and proximity. This is the pub, that is
the church, and there is the village hall. The shop
is a mile in that direction, if you want to moor
your boat here talk to Pete. It’s nice in the bar
when the tourists go home, though it’s their meals
that fund our quiet drinks. Whatever point of access
takes the mood or imagination, there are only
two roads in, the lane with passing places out.
A chasm has been opened and this is where
I want my poem to go, rowing across the sky
of water at high tide. We cannot ever go back
through the red door. It is no longer our house,
we would not recognize it as even the same world.


A Cartoon Song
for Peter Gillies

My friend who paints pictures quickly
and considers every word he writes
is worried about freedom. This essay,
he says, is undefined, brings a new
set of problems to the course.
In the pub, Bill seizes upon
the catalogue of paintings I’ve
brought along as if it’s magic,
and can see it all straightaway.
Work I’ve struggled to comprehend
he glances at and understands. In
Guinness terms it’s all fluid dynamics
and computer hum, the chaotic crackle
of life today: intereference and inter-
ruption, the way we circle around
common occurences, the sudden
slash and slide of colour within a
black outline or bright pattern box.
All things to all: overwritten poems
and under-rehearsed excuses,
moments of wonder and confusion.
The CD skips in the jukebox to make
the best dance loop I’ve ever heard.
‘Time to go home gentlemen.’
And for once the landlord is right.
Wonder goes back in the plastic bag,
we neck what’s left in the glass and
head out into the dark. Things that
float, things that live, things that die
are on show in a gallery nearby.
The world is in the making and
all my marking waits to be done.
If we could slow down or just not
speed up, this would be a cartoon
song. As it is, it’s a long way from
here to where we started out, so
I’d best be moving on. The artist
emailed back and said he’d send
a catalogue but the gallery never
replied. Life is by invitation only,
we are all natural and legitimate
heirs. You have always been intent
upon challenging how the poem
might be made, but I am beginning
not to care. Intuition seems to do.

© Rupert M Loydell
Posted by Douglas Messerli at 8:14 AM