The lack of parental concern in his childhood, his first wife's early death, and an unhappy marriage to his second wife, resulted in sense of moral anguish throughout much of Rubén Darío's life and writing. This, coupled with his sensuality constantly in opposition by his fervent faith in Roman Catholicism created, in many of his works, a tension between the scared and the profane. 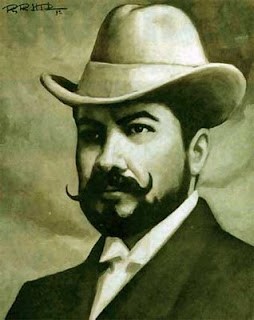 Traveling from 1886-1889, Darío visited outlying areas of his own country, Chile, Guatemala and other Central American countries. He also traveled, in 1892, to Spain as a member of Nicaragua's commission to the Quadricentennial Celebration of the New World's discovery. He also visited New York and Paris (in 1893), Argentina (in 1893-98), and European countries from (1898-1915).
Among Darío's early literary mentors was Francisco Gavidia of El Salvador, who introduced him to French literature, especially the work of Victor Hugo; and Eduardo de la Barra and Pedro Balmaceda (the later the son of Chile's president) of Chile. Through these individuals, Darío encountered current French books and reviews.
In 1888 he published Azul (Blue), which after a review by the Spanish poet Juan Valera, brought him international attention, and a recognition of Darío's involvement with modernism. While in Buenos Aires in the late 1890s, serving as Colombia's consul, Darío co-founded, with Ricardo Jaimes Freyre, the magazine Revista de América, the first symbolist review in the Hispanic world. While in Argentina, he also published the Verlaine-inspired Prosas profanas y otros poemas (1896, Profane Hymns and Other Poems, 1922) and Los raros, a volume of essays.

Cantos de vida y esperanza of 1905 (Songs of Life and Hope) is considered one of his major works. Here, Darío has abandoned much of the French imagery of his previous books and replaced it with strong new world imagery and subjects.

Darío also wrote short stories, philosophical essays, and other works. He died at the age of 49, in 1916.

First, a look;
then the burning touch
of hands; and then
the racing blood
and the kiss that triumphs.
Later, night and delight. Later, the flight
of that craven gossip
seeking another victim.
You are right to weep, but it is too late!
Do you see? I told you!

I would not want to see you a mother,
my dark sweet woman.
But then, there is a canal
not far from your house,
and of course it is well known
that man is not born with the knowledge
of how to swim.


—Translated from the Spanish by Lysander Kemp

Towers of God! Poets!
Lightning rods of Heaven
that resist the fierce storms
like solitary mountains,
like peaks in the wilderness!
Breakwaters of eternight!

Magic hope foretells
the day when the traitorous siren
will die on her musical rock.
Hope! Let us still hope!

Still hope. The bestial element
consoles itself with its hatred
of blessed poetry, hurling
insults from race to race.

The rebellion from below
is against excellence.
The cannibal waits for his chunk of flesh
with red gums and sharpened teeth.

Towers, fasten a smile to your banner.
Confront this evil and suspicion
with a proud puff of the breeze
and the tranquility of the sea and the sky —

—Translated from the Spanish by Lysander Kemp

With a Hebrew prophet's voice or a verse from Walt Whitman,
Is how we must approach you, hunter!
Primitive yet modern, simple yet complex,
With one part Washington and four parts Nimrod,
You are the United States,
You are the future invader
Of that ingenuous America of native blood,
That prays to Jesus still and still speaks Spanish!

You are proud and strong and typical of your race;
Cultured and clever, firmly opposed to Tolstoy.
In breaking horses and in killing tigers
You are an Alexander-Nebuchadnezzar.
(You are a professor of the Active Life,
As fools say nowadays.)

You hold that life is a fire,
And progress an eruption;
That where your guns can reach,
There you control the future.
No.

The United States indeed are great and powerful:
They shake themselves, and a deep tremor rocks
The enormous ridges of the Andes to their base.
Once Hugo said to Grant: "The states are yours."
(For, rising but then, the sun of Argentine
Scarcely shone; the Chilean star had barely rise...)
You're rich; to that of Hercules you join the cult of Mammon;
And, illumining the path that leads to easy conquest,
Liberty rears her torch above New York.

But our American, in which from the far-off days
Of Netzahualcoyotl poets have sung,
Which still preserves the footprints of great Bacchus,
And learned long since the alphabet of Pan,
Which reads the stars, and knew the great Atlantis
Whose fame resounding reaches us from Plato;
This, our America, from the first has lived, and lives
On light and fire, on perfume and love,
The land of Moctezuma, of the Inca,
Fragrant still with the memory of Columbus,
America Catholic, America Spanish,
America in which the noble Guatemoc said:
"I'm on no bed of roses,"; this America,
That rocks with hurricanes, and lives by love,
O men of Saxon eyes and barbarous souls, she lives,
Dreams, loves, vibrates, is daughter of the Sun;
Beware, for Spanish America still lives;
The Spanish Lion has a thousand cubs.
You need, O Roosevelt, to be, for God himself
The terrible rifleman, the strong hunter
To keep us in your iron grasp.

Everything is yours, you think: but you still lack — God!


—Translated from the Spanish by G. Dundas Craig, with revisions
by Douglas Messerli

Welcome the sun, spider, no need for spite.
Give thanks to God, o toad, for your life.
The hairy crab carries rosy thorns
and the mollusk something similar to the female sex.

Learn to be what you are, engimas, given form
Give up the Norm,
a responsibility, in time, passed on to the Devine.
(Play, cricket, to the moonshine, and bear, dance.)

—Translated from the Spanish by Douglas Messerli

Who proffers us the goblet brimming?
Who gives us the hidden star?
Who gives blood to the Tree of Abundance?
Life.
Who sees that we drain the fragrant cup?
Who detains the steps of luck?
Who is it who all hope perverts?
Death.

—Translated from the Spanish by Gilbert Alter-Gilbert

Posted by Douglas Messerli at 1:48 AM