Born in a naval hospital in Vallejo, California in 1947, Rae Armantrout began life and was reared in communities of military men and their families on naval bases throughout California, but predominantly in San Diego. As an only child with a deep sensitivity to her own inner life, she lived a very insular childhood, described quite beautifully in her short autobiography of 1998, True. Like many young, developing writers and artists, Armantrout felt distanced from the lives of her parents, but her parent’s fascination with myths of the West, balanced with a Methodist fundamentalist perspective gave Armantrout a strong sense of irony, revealed in nearly all her poems.
Living with her parents in the working class community named Allied Gardens, Armantrout enrolled at San Diego State University in 1965, with the intention of majoring in anthropology. During her first year there, she met Chuck Korkegian and continued to date him throughout her university years in San Diego. During her sophomore year she discovered the works of poets such as William Carlos Williams and Denise Levertov, which led her to refocus her educational studies on English and American literature. Ultimately, this led her to transfer to the University of California, Berkeley. 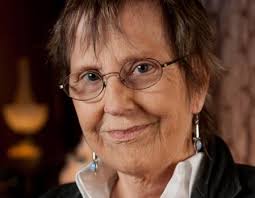 While attending the university in Berkeley, Armantrout studied with Levertov and made friends with Ron Silliman and others who would eventually be connected with the San Francisco group of “Language” poets of the late 1980s. She graduated from Berkeley in 1970, returning to San Diego and Chuck, whom she married in 1971. With a few poems accepted by Clayton Eshelman for his magazine Caterpillar, Armantrout began to perceive herself as a poet.
She went on to take a Master’s degree from San Francisco State University, publishing her first book of poems, Extremities, in 1978. Since that time she has been actively involved in various literary communities through southern California. Among her books are The Invention of Hunger (1979), Precedence (1985), Necromance (1991), Made to Seem (1995), The Pretext (2001), and Veil: New and Selected Poems (2001).
Her writing, as Robert Creeley has described it, is one of a “clarity of syntax,” with an interest in “the calm solidness of words”; but beneath this seemingly transparent presentation of the southern California landscape, with its metaphors of film, history, and popular culture, is a wry sense of with (in both its meanings of droll humor and wise knowing). The poetry is also aphoristic and proverbial in a way that reveals the influence of American literary figures such as Gertrude Stein and Williams. Her significance as a contemporary poet is apparent in the collection of essays on her work, A Wild Salience: The Writings of Rae Armantrout, with pieces by Lyn Hejinian, Robert Creeley, Fanny Howe, Ron Silliman, and others.
For many years, she lived in San Diego, where she taught literature and poetry workshops at the University of California, San Diego. She has also been the organizer of a poetry reading series at the University. With Fanny Howe she organized the highly respected “Page Mother’s” conference on woman’s writing at the University in 1998.
More recently, Wesleyan University Press have published her books Veils, Up to Speed, Next Life, and Versed. The latter title won the 2009 National Book Critics Circle Award and the 2010 Pulitzer Prize for poetry. In 2016, they published her Partly, New and Selected Poems, 2001-2015.
Her Collected Prose was published by Singing Horse Press in 2007.
She and her husband now live in Everett, Washington.

Poppy under a young
pepper tree, she thinks.
The Siren always sings
like this. Morbid
glamor of the singular.
Emphasizing correct names
as if making amends.

Ideal
republic of the separate
dust motes
afloat in abeyance.
Here the sullen
come to see their grudge
as pose, modelling.

The flame tress rip themselves
with flame.
But in that land
men prized
virginity. She washed
dishes in a black liquid
with island of froth--
and sang.

Couples lounge
in slim, fenced yards
beside the roar
of a freeway. Huge pine
a quarter-mile off
floats. Hard to say where
this occurs.

Third dingy
bird-of-paradise
from right. Emphatic
precision is revealed as
hostility. It is
just a bit further.

Oleander: coral
from lipstick ads in the 50's.

Fruit of the tree of such knowledge.

It appears
in the guise of outworn usages
because we are bad?

as well as I do
my own mother
holding up the picture book.
This is the world

of objects, faking
an interest in their own affairs
long enough for me
(the child on the logo)