Born May 7, 1861 in Calcutta, Rabindranth Tagore is one of the great writers of India, with a writing career in nearly all genres that extends over more than sixty years.
Tagore's father, the writer, scholar, and mystic, Debendranath, popularly called Maharshi (Great Sage), was a member of the Brahmo Samaj movement founded by Raja Rammohan Roy. Although he seldom saw his father, his influence was strongly felt, and at the age of twelve the young boy was taken by his father on a four-month long journey to the Punjab and Himalayas. During this trip, the father took over the education of his son, teaching him Sanskrit, Bengali and English literatures.

Other major influences of his early years were the Vaishnava poets of medieval Bengal, the classical Indian aesthetic and philosophical heritage passed on to him by his family, and modern European writing, particularly English romantic poets. 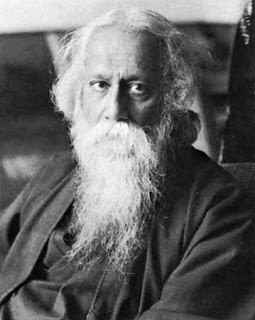 Tagore began writing at an early age, and continued throughout his life. A great many of his poetic works were also songs, 2,265 in all, with musical and verbal rhythms. In the late 1890s he underwent a spiritual reawakening, which was reflected in his works of this period, Manasi, Sonar Tar, Chitra, Naivedya, Kheya, and the work that helped him gain recognition in the West, Gitanjali (Song Offerings). It was the publication of the last book in English in 1910 that helped him win the Nobel Prize three years later. Living in London in 1912, Tagore gave his translations of this work to the painter William Rothenstein, who passed them on to William Butler Yeats, who greatly admired the work. In June of that year Rothenstein had Tagore read at his house to an audience that included Ezra Pound, who encouraged Harriet Moore to publish them in the American journal Poetry.

Written shortly after the deaths of his wife, two daughters, and younger son, Gitanjali was an inner search for peace of mind and a way to rise above his misfortunes. Its central concern is the search for divine purification and service on humankind.

He died in Calcutta in the 41.

Go here for another, longer biography and a selection of poetry: