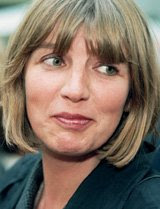 Pia Juul was born in Korsør, Denmark on May 30th, 1962. Her parents were both teachers and today still write books for children. She graduated with her General Certificate from Hobro Gymnasium in 1981. Her first poetry was published in the journal Hvedekorn two years later, and in 1985 her first collection of poems, levende og lukket (living and locked) was published by Tiderne Skifter. In 1987 her second volume, i brand måske (on fire perhaps) was published, and Forgjort (Bewitched) followed two years later. Since that time she has published two futher volumes, En død mands nys (A dead man’s sneeze) and sagde jeg, siger jeg (I said, I say). In 1988 she was awarded the State Foundation for the Arts three-year grant.

Along with her publishing Juul has been active in the literary world as co-editor of the literary magazine Den Blå Port (1993-1995) and as a board member of the Association of Danish Fiction Authors. In 1996-1998 she was a member of the triumvirate committee of the State Foundation for the Arts. She has also written dramas, radio plays, short stories, and a novel Skaden (Magpie). Her translations from English and Swedish include Ted Hughes, Michael Cunningham and Michael Redhill.

For seventeen years Juul lived in Copenhagen, but now lives with her husband and two daughters in Kragevig in the southern part of Sjælland (Zealand) in what she describes as a forest.

Juul writes of her drama, Spiritus: “I believe it’s possible to create a universe in any genre—as long as it has it’s own logic, I don’t think it needs to be explained.” Her poetry is characterized by an almost “reckless” imagination and an emphasis on meter and irony.