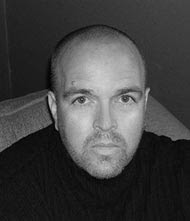 Peter Jay Shippy was born in Niagara Falls, New York. He was raised on his family’s apple farm, on the shore of Lake Ontario. He was educated at Northwestern University, Emerson College and the University of Iowa, where he received an M.F.A.

His work has been published in numerous journals, including The American Poetry Review, Fence, FIELD, The Iowa Review, McSweeney’s Internet Tendency and Ploughshares, among others. Shippy has been awarded writing fellowships from the Massachusetts Cultural Council and the National Endowment for the Arts. He teaches at Emerson College and lives with his wife in Jamaica Plain, MA.

Posted by Douglas Messerli at 11:53 AM