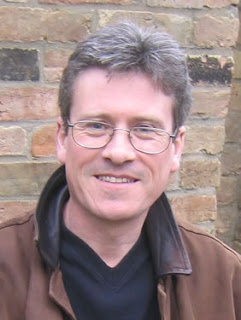 Peter Hughes was born in Oxford in 1956. His mother was born in the Claddach, Galway—an impoverished Catholic ghetto without electricity, running water or sewers, situated outside the city; his father's people came from Redhill, in Surrey.

Hughes went to local comprehensive schools and, for a while, to Sunday school at the convent. For several months it was his ambition, as he writes, "to become the big nun who sang 'Climb Ev'ry Mountain' in The Sound of Music." For a couple of years he did a range of disparate jobs (milkman, stagehand, hiring out boats, gardening, landscaping, playing guitar in a bar, building, house renovation) and travelling in Europe—especially around Alpine regions—before going to Cheltenham Art College for a year.

He spent a year in the Isles of Scilly—reading, growing daffs and spuds and shooting rabbits with a Czech shotgun. He took his degree in English, from 1978 to 1981, at what was then the Cambridgeshire College of Arts and Technology. It was in that period that he came across the poets who have influenced him most, including the Americans such as John Ashbery, Tom Waits and Frank O'Hara; and various contemporary European poets and writers closer to home: David Chaloner, Andrew Crozier, Roy Fisher, John James, Barry MacSweeney, Doug Oliver, Peter Riley and John Welch. He particularly liked Pasolini and his description of himself as a Catholic Marxist.

After doing an M.Litt. in Modern Poetry at Stirling, he moved to Italy in the autumn of 1983, living and working there, mainly in Rome, until 1991. For him, he notes " it is still full of more sacred sites than are listed in the guide books, including every stop on the underground."

John Welch published the first of his poems as The Interior Designer's Late Morning in 1983. His Many Press also did Bar Magenta (1986), a book he shared with work by Simon Marsh (who has been based in Milan for over 20 years now). Peter Riley brought out his Odes on St. Cecilia's Day as one of his Poetical Histories in 1990. He published The Metro Poems in 1992 – one poem for each of the stations of the Rome metro. Rod Mengham did two Equipage booklets in 1995: Psyche in the Gargano and Paul Klee's Diary. Andy Brown published Keith Tippet Plays Tonight as a Maquette chapbook in 1999. Salt did Blueroads: Selected Poems in 2003. There were two chapbooks in 2006: Minor Yours, from Oystercatcher Press, and Sound Signals Advising of Presence from infernal methods.

He observes that he has " been lucky enough to be involved in some memorable readings over the years: with David Chaloner, Helen MacDonald and Roger Langley at the Cambridge Conferences of Contemporary Poetry; with bass player Simon Fell at SubVoicive; with guitarist Ron McElroy at the Diorama Gallery; with John Welch, Simon Marsh, Nigel Wheale and Peter Riley on several occasions, in various locations.

"Music, painting and writing have been equally important to me and I tried for years to sustain an active involvement in all those fields, as well as earning a living by teaching. The crunch eventually came in spring 2006: I decided to stuff my paints and instruments in the loft and focus on the writing.

"The results have included The Pistol Tree Poems (a collaboration with Simon Marsh which is ongoing and unfolding on the Great Works website); Berlioz (serialised on Intercapillary Space); Italia (published by Liminal Pleasures); The Sardine Tree (a life of Miró); From the Green Hill (based on the work of veteran jazz trumpeter Tomasz Stanko); and the Shearsman book Nistanimera."

Hughes lives on the Norfolk coast, with his wife Lynn, in a coastguard cottage which is creeping ever closer to the cliff edge; but the views are increasingly breathtaking.

the space above has increased

a low tide behind
the sea wind come to life

a chimney unblocked
after 20 years

the winds walking
waves on the sea

through the carpet
right to the fire

on the horizon
a white citadel

noise as of boxes being shifted
way below or above

the making tide & blue angels
go about their business as usual

Attended by two fallen angels
and an evolving mollusc

in the absence of a nozzle for the old green garden hose
I once again succumb to wrinkled pink thumb cramp
fanning ghostly rainbows at the beans & rhubarb
turning through glistening arcs of soft wet light
towards the disused lighthouse & the west
swooping swags of mist
slowing settle on the seedlings
& the midweek nymphs depart:
diverse birds emerge with expressions like mad pirates
seeking beakable earth after the dry spell
we regard each other sideways
as the sky turns farfetched Catholic mauve
filled with aching Bruckner endlessness
the spacious clarifying dusk sung by the first few evening stars
daily vastation after tea a dry fly cast int the silence
it's been a funny month
I swapped that tarnished tenor sax
for a scuffed black ocean-going canoe
& we found out how much is closed
with the help of new maps including OS Explorer 250
constructed on Transverse Mercato Projecting
Airy Spheroid OSGB (1936) Datum
a deer & her fawn at TF670283
so we stood motionless gently watching each other
breathing like a nature poem
but not he one I wrote yesterday:
alpen/alpen/digraph cluster/I felt sadder/after lunch
maybe I'll change it today as we had bacon
the Omniscient Mussel is relaxin'
in a creased slate-colored shell suit:
wassup purrs the benign bivalve
hi OM I say why have they barricaded Gipsy Green? [TF691424]
the local suits heard the goat-girl was coming replied the mollusc
the lost & visionary goat-girl
with her unsponsored songs of tomorrow
at the end of our walk
we saw the road from the other side

dogs have no pores & polish up well

I got the mosquito with an orange
then I ate the orange: justice is done
in airports the blues is turned to trifle
& because travel makes you really thick
why not buy four kilos of Toblerone
& a bottle of Scotch for eighty quid
the engines start up so do the babies
howling over the lights of Piraeus
then we & the babies are swept up to
twenty-six thousand feet over somewhere
too much like Switzerland for its own good
above the earth in the dark thoughts turn
to Norfolk winter saltmarsh & footpaths
meeting at the edge of Brancaster woods
where colonies of snails roost in the trees
mid-evening over a place like France &
from this height the world is decorated
by humanity with gold & silver
lights of habitation embroidered over
the rich dark cloak of earth with moonlight
flowing down our rivers past the churches
schools & hospital blocks to the lighthouse
poised by the shimmering acres of sea
I foolishly thought that writing this poem
would make happier & it did

(from The Summer of Agios Dimitrios, 2009)
Posted by Douglas Messerli at 7:37 AM

exciting stuff as always Peter.
glad I found this