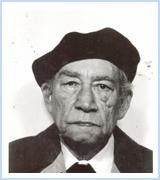 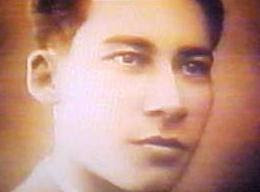 
Born in Vallehermoso, La Gomera, Pedro García Cabrera stayed for some of childhood in his father's home in Seville, before returning the Canaries, where he lived until is death in 1981.

After secondary school, García Cabrera began writing for the Gaceta de Tenerife, later joining the staff of the magazine Hespérides. His first book of poetry, Líquenes (Lichens) appeared in 1928. A few years later he helped to found the important magazine of the Canarian indigensit movement, Cartones. And from 1932-1936, he was a founder of the Gaceta de Arte, representative of one of the brilliant cultural movements of the Islands. To Gaceta he contributed poems and essays, and the in 1934 the journal published his Transparencias fugadas (Fled Transparencies), one of the major documents of literary surrealism of the Canary Islands.

When the Spanish Civil War broke out, García Cabrera was arrested for his socialist ideas and deported to Villa Cisneros, where he escaped. But upon the end of the War in 1936, he was again arrested and imprisoned until 1946, whereupon he returned to Tenerife to work as a diplomat. During these many years, he wrote numerous collections of poetry, including Dársena con despertadoes (Dock with Alarm Clocks), La rodilla en el agua (The Knee in the Water), Los senos de tina (The Breasts of Ink), Entre la guerra y tú (Between War and You), Romancero cautivo (Captive Ballad Book), La arena y la intimidad (Sand and Intimacy), Hombros e ausencia (Shoulders of Absence), and Viaje al interior de tu voz (Journey to the Interior of Your Voice)—all of which remained unpublished until his Obras completas (Complete Works) of 1987.

After that collection, he continued to produce many collections of poetry that established his reputation in the Canaries, including Vuelta a la isla (1968, Return to the Island), Entre cuatro paredes (1968, Between Four Walls), Hora punta del hombre (1969, Rush Hour of Man), Las islas en que vivo (1971, The Islands Where I Live), Elegías muertas de hambre (1975, Elegies Dying of Hunger), Ojos que no ven (1977, Eyes That Do Not See), and Haciala libertad (1978, Towards Freedom). Other books, uncompleted at his death, appear in his Obras completas.


The bird of dreams speaks

Just as ghosts are not known for their habits,
I want to explain the key to my best acts.
So you will learn
That
To pschoanalyze the flight of butterflies
There is not better device than the magnets of my beak.
That I feel no envy for fog
For I myself am the true fog, adapted
To the shape of my globetrotting desires.
The fog you see in the field is just a mirage
That cannot endure the spiders of reflections.
That an insect, using the insomnias of my long
Lace tail, can darken the night of someone's temples.
What you will never know is if the roads
Face towards or away from passers-by
For it depends
On which of my wings points to the wet of a cry.
No one will be able to understand that my greaatest surprise
May be to find a fair-haired violin
On a greedy plain of ice,
Though he may know that the color of anxieties
Is that of weeping for a love ripened among nettles.
The same for a snail as for a sigh as for a hoof,
I would make a microphone
To hear the gasping of water in the light's depths.
If my death existed,
I would send for it to be found deep in my eyes
With the first top hat that passed by
Dressed in burning feathers.
There's just one word that inspires my tenderness.
That one balanced
On the tip of a rhetorician's tongue.
For me it never rains, but if it did,
They would be Gothic letters and cottons in females.
This is my alcohol. Sip it while you sleep.
This time only I am going to lead you
To the angriest landscape on earth,
Bleeding to the right of a fantasy of larks.
No hope
Blinds me,
Both because I am at once all blindnesses
And because I slope down beyond every sea.

—Translated from the Spanish by Louis Bourne

To the right of the voice of the statue's dream
A river of birds flows by.
The river is a little girl and the bird a key.
And the key a field of wheat
That opens a slow snail of a hundred days.
This means the hills of broken men
Are made of cardboard, wood and green walnuts.
But don't touch that anguish; it's all from the Sunday
When they created the nests in which tomorrow the
[adultuerous stones will brood.
It's from that fish looking through the sea's eye
At how war is the tenderness guarding the empty beds
And peace that blood with which feet spatter their chains.
Let's go now. Don't pierce the shadow I had four years ago,
For my fingers ache with hunger and my heart with rains.
Better for you to sleep, to go on walking.
I'll wait for you till the tigers, on the lake shore, after the
[wine harvest,
Lying farmhands to the fields
And shoulders of someone on the deserted promises
[without water.

The lark of good fortune


Give me your green hand, seaweed,
Foam's faithful beloved,
For in it I want to read
The sea's good fortune,
That you are in love
None has any doubt:
Neither the beaches, nor the islands,
Nor the eyes of the rain.
Nor the rings, either,
Of wakes surrounding you,
Nor the breeze's does
Racing over the dunes.
Anxieties' blue vein
Beats in your ripe temples.
The salt is always weaving
Orange blossom for your wedding,
The sky, branches of stars,
The moon, ermine furs.
And the fish can no longer
Swim your deep waters
Without feeling they are nightingales
Of the caverns underwater.
And further down, in your
Liquid shadows' depths,
An instinct of corals
Dreams naked throats.
The bords of your domains
Fly you feather beds;
To you forest birds will bring
Epithalamiums of fruits.
(Here the green good fortune
Of seaweed is cut short,
But I can add—
Without boasting or bitterness—
That if the sea fell in love
More than he had ever done,
It was because my sweet friend
Wet her feet in the foam.)


In this village
The schoolboys draw
Sluggish landscapes of shadow
With greys dying of grief.
The pomp of colors
Here amounts to nothing.
Neither the sunflower of afternoon
In the skies, nor the slope
Of greens uphill,
Nor even the blue lure
Of a rainy foot on the sea
Appear on their palates.
For the man of these fields
Feels his piece of earth
So deep inside himself,
In his closest intimacy,
That when at day's end
He sees his job fulfilled,
The evening grey is already
Ashes of the bonfire
That blazed, while he worked
Without lifting his head.
The sunset's idle show
Neither makes the grass sprout,
Nor satisfies hunger and thirst,
Nor reddems and frees him.
he devotes himself to his hands,
Hands with which he suddenly
Sows, in the same furrow,
His freedom and his censure.
He shares, from the last
Thirsty melancholies,
The equality of seeds
In the bosom of the earth
And that round darkness
Of the womb of harvets
Taking him back to the silence
Of maternal entrails.
Silence of Tacoronte
Hard as stone.
When you move away from
The highway's easy river,
This silence follows you
Like a bulldog
And against him there's no use
Shutting windows and doors.
Wherever you go,
His tongue keeps licking you.
This silence is the must
Fermented by wine-cellars,
The mirror in which rebellions
And sorrows see themselves.
It is the loneliness
Painted by the schoolboys;
It is the heart of man,
His veins pulsing rage;
Alone with ideas inside,
Lonelier, ideas outside.
Silence that never doubts
Treads firmly and tests
What still remains in us
Of island and volcano.
And amidst this silence
That yields to no one,
The night of Tacorante,
Vintageress of stars,
Into the comfort of her
Dark tresses, lets sink
The hands of him who works
And the brow of one who dreams.

To my cousin, Rogelio Trujillo Cabrera, and Isabelita


She starts the day,
Greeting the mosaics one by one,
Stirring them in their calling as mirrors.
What joy to scatter so much night,
To erase so many rings under eyes,
To make the shadows leave in flight!
What a job hers, setting in motion
The linked activity of the things we love,
And they have almost managed to become us,
Lend us features, even a name,
The labored name of our preferences,
Earned with bare hands from years,
Building a face of surprises
With the flow of each instant,
The name we choose through that cosmos
Of Habits and familiar belongings,
More real than the other given us by our parents.
And how a chore so floored
Can produce a dawn so difficult!
She preludes the orchestrated swarm
Of taps, the water's music,
The good days of oiled hinges,
Swaying her amazon breed
In passages, on patios and pavements,
Happy as a harp
Playing in the energy of two arms.
If only her press for purity could clean away
Stabbing ice, grim cries
And clouds of ash.
If she could at least take the dirt from our eyes
So we could see the linked light
Striking the walls outside and our foreheads.
The broom also feels misfortunes,
At times sweeping up tears
And the broken windowpanes of dreams,
And even genuine pieces of herself,
The useless feet of her hope,
Dead now the wish of walking by herself.
But without her Cindrella hustling,
The house could never get up,
Nor welcome friends,
Nor serve as a horse for the little ones.
For there is a great deal of grandmother
In the humanity of a broom.


A bud from the sea has reached my feet.
Unexpectedly
It sprouted from the womb of a wave
With its body of sobings and murmurs
As if it were truly a life.
Such pure vapor,
Such seething milk,
Crowned its hurried existence
So its spark of water left an opening
Not even to memory.
I have hardly been able to keep an instant
Its time of dying,
Its swift birth to death.
And maybe the whole soul of an island,
More than an obsession of rocks standing fast,
Is a bud of binding sea.


Other forests came. New wyas
Of wilting shadow desposed
Green lattices, the leaves foreboding
Coffered rhythms.
They condemned ears of grain to death.
The washing out of leafage was total
In valleys and mountains and plains.
Everything throbbed
By the kiss of a flower
Collapsed.
And earth filled up with scaffoldings
That were affected neither by springs
Nor senile autumns.
One single season,
In the chaos of spurrings, they imposed
Industrial centers.
Orchestras of emtal symphonied
Coulds of smoke. Diagrams of sabbats
Maddened connecting rods and lightning bolts.
The lights kicked. They plunged us
Into the poverty of a sigh.

After so much crime,
Of murdering valid words
For the sake of plastics,
They found a clover
That had been saved from the fire.
The subjugated machines stopped,
Seeing the freedom of that marvel.
And the asphalt gave birth to green eyes,
Seeing the courage of a leaf.

"[With a compass of rainbow...]," "The bird of dreams speaks," "The open engagement," "The lark of good fortune," "Tacoronte," "The broom," "A bud from the sea...," and "Hegemony of gadgets,"
Reprinted from Contemporary Poetry from the Canary Islands, trans. by Louis Bourne; Selected and Introduced by Sebastián de la Nuez Caballero (London and Boston: Forest Books, 1992). Translations copyright ©1992 by Louis Bourne. Reprinted by permission of Louis Bourne.
Posted by Douglas Messerli at 8:00 AM