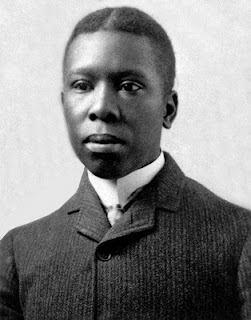 Born in Dayton, Ohio in 1872, the son of two former slaves, Dunbar attended the public schools, and was taught to read by his mother. She and her husband steeped their son in the oral tradition, telling him numerous folk stories and imbuing him with a sense of the power of language.

Dunbar was the only black student in the school, but it was his noted scholarship that most distinguished him, as served as editor of the school paper, president of the literary society and the class poet.

After graduating he was forced to take up the job of an elevator operator, but continued to write in his spare time, becoming locally known as the “elevator boy poet.” In 1893 he published his first volume of poetry, Oak and Ivy, on the press of the Church of the Brethren. The book was written in the black dialect of writers such as Stephen Foster and Joel Chandler Harris.

He worked briefly in the Dayton courthouse, and then was hired by the noted abolitionist Frederick Douglass as a clerk in the Haiti Building of the World’s Columbian Exposition.

In 1895, his second collection, Majors and Minors, appeared, receiving some critical attention. By the time of his volume, Lyrics of Lowly Life, published the following year, he was able to garner an introduction by the noted novelist and editor, William Dean Howells. In all, he published eleven volumes of poetry, numerous lyrics and other works.

Although Dunbar is highly regarded as the first major black poet of the 20th century, he has also been accused of using the stereotyped myth of the “old time Negro” by writing in dialect and focusing on themes of accepting servitude. Yet he was influential to several generations of African-American writers, and was highly praised by the Harlem Renaissance poets of the 1920 and 1930s.


We Wear the Mask

We wear the mask that grins and lies,
It hides our cheeks and shades our eyes,--
This debt we pay to human guile;
With torn and bleeding hearts we smile,
And mouth with myriad subtleties.

Why should the world be overwise,
In counting all our tears and sighs?
Nay, let them only see us, while
[We wear the mask.

We smile, but, O great Christ, our cries
To thee from tortured souls arise.
We sing, but oh the clay is vile
Beneath our feet, and long the mile;
But let the world dream otherwise,
[We wear the mask!

I know why the caged bird beats its wing
Till its blood is red on the cruel bars;
For he must fly back to his perch and cling
When he fain would be on the bough a-swing;
And a pain still throbs in the old, old scars
And they pulse again with a keener sting—
I know why he beats his wing!

Posted by Douglas Messerli at 7:37 AM