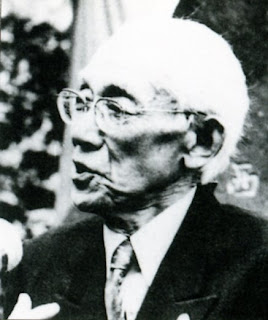 Born of a well established family in Niigata, Nishiwaki first aspired to become a painter. He studied economics at Keiō University in Tokyo. During this period, he read extensively, particularly in foreign languages, and began writing his own work in Latin, French and English. Indeed, throughout his life, Nishiwaki often avoided the conventional use of his mother tongue, preferring instead to write for European readers.

His first two books, Spectrum, published in England in 1925 and Poems Barbarous, published in Tokyo in 1930, were collections of English poems. Even his Japanese poems sounded, to the Japanese ear, as foreign. His 1933 collection, Ambarvalia, referred to the a Roman agricultural rite, and several of his poems were influenced by Western works such as The Waste Land and Ulysses.

Yet, for all of its European associations, Nishiwaki's poetry is extremely grounded in place names and nature that is distinctly Japanese. With his surrealist-like passages and the juxtaposition of images, moreover, he revolutionized modern Japanese poetry. In Tabibito kaerazu (1947), he returned to more Eastern traditions, using forms such as the renga and other devices more common to Japanese writing. Kindai no gūwa (1953, The Modern Fable) is one of his greatest books. In this he creates a kind of discourse between East and West, between the ancient and the modern, and between concretism and abstraction. His later works moved even more in the direction of Joyce and other radical experimenters. He died in 1982.

The Modern Fable can be purchased here.

Along the riverbank where daphnes bloom
and shine,
passing by an angel who has an apple and a saber,
a blond boy runs,
holding firmly between his fingers
a fish called red-belly
above its milk-light eyes.
The golden dream warps.

A Man Who Reads Omeros

The daybreak and the twilight, quietly,
like the two sides of a gold coin,
passed through a tamarind,
and come every day to his throat.
In those days he boarded at a dyer's
on the second floor and read Omeros.
In those days he had a coral pipe
with a picture of pansies.
The Galileans all laughed (Your pipe
looks like a girl's letter or
a Byzantine romane — Uuee).
But its phosphorescent smoke circles
cockscomb bloom,
and the goddess' nose and hips.

The fable at the end of April is linear.
On the peninsula the bronze wheat and aloe-green rape
were rusted like the willowy woman's robe.
One thinks; therefore, existence ceases to be.
Man's existence is after death.
When one ceases to be human one merges
with greatest existence. For now
I don't want to talk a lot.
It's simply that with the people in the poppy house
with the people doing metaphysical mythology
I take a hot bath in Ochiai where mustard grows.
I think secretly of Andromeda.
In the house beyond the willowy woman, lying on her side,
plays go with a woman.
She ponders, her hand stuck out of the front of her robe.
We philosophers gathered before the broken water wheel
and holding azalea and sweet flag in our hands
had a photo taken, had another hot bath
served ourselves an arrowhead-like liquor
and immersed all night in geometrical thoughts.
I think of a friend of the days
when we talked about Beddoes' suicide theory
as we climbed the D_genzaka, and also thinking
about the white-haired Einstein walking
in an American village, I cannot sleep.
I run along the Nekko river alone.
Early in the morning I walk the white road to an inn at Seko.
A damson tree with white blossoms stands
crooked at the roadside. I turn toward a bush warbler's
song and see blossoms of mountain cherries already fallen.
Pale violets clinging to rocks cattails
dropped in great masses in the mist.
My hair has turned badger-gray.
All of a sudden an Ophelian thought:
wild strawberry vetch buttercups wild roses
violets I picked
I hold this full bourquet with a pencil in my hand
for the willowy woman for the never-ending love
for a curses of Pascal's and Rilke's women
and for this water spirit.

What age was it when they made this garden?
There aren't many
who walk this road
but in this valley where giant elms
twist their branches into the sky
I pick the seeds of wild roses
for your gourd.
Liquor may be exhausted but dreams spurt on endlessly.
Dangling a string of empty cups from my forefinger
brows raised and like a breeze
I go with a man to the blue sea
On a day like this the biologist
wearing the pear-colored tie
tells heartless stories
of sea anemones and wild grapes.
In the moonlight that Neptune casts
in weather like this, quite unseen
another god of gonzui
splits solemnly.
Thus imagining gaudy matters
smoking my hackberry pipe
I ran toward the Meguro station to see the winter festival.
Near the station at a house called Scipio
an old woman was playing the flute
carousing.
From behind me a boy pulled at my mantle dyed purplish indigo
with grass green lining.
"Mackerel pike and chestnuts are out of season but would you
please honor us by dropping in
my master says.
Mr. Socrates is here too."
This is the beginning of
Plato's Republic.

In the desolate season
I roamed
the horizon of the endless mind
and strayed into a village
a hawthorn hedge set around it.
A vagabond cooks dog meat on a fire
from which a purple cloud flows away.
The man who sang at summer's end the song of roses
grieves over this heart's ruination.
The seed collector, the bulbul, does not talk.
I will study in this village, with a lamp on
"Study like Milton"
whispers an angel like a university president.
And yet I ended up playing chess with a hunter and a fisherman
until the bush put on pear-like blossoms.
Now that I've lost everything
I'd like to consecrate this evening
to the person who circles the hedge
playing with butterflies
to the kingfisher and the man that strays in
to the eternal woman
to this winter day
putting in a cup with a long handle like a lofty tower
the haws and the tears.


—Translated from the Japanese by Hiroaki Sato

moss
stone
apple
autumn haze
black fruit of trifoliate orange
gust of dust
dream's sufferings
the Yase road reminds one of past and present
fruit of wild rose sag over a rock
to the old person, a woman,
who had matsutake for a souvenir
a city student used a startling word
soon a snowy night
boars wreck the radish garden
bulbuls eat nandin seeds
but all day long drinking from a gourd
I talked with Mr. Sakurai about plums
then while I sit by a foot-warmer
and read Ptolemy's astronomical book
jagged yellow flowers bloom
from bitter roots by the Yase road
a blue-green snake shiny with rain
coils around a hawthorn tree
the philosophy of rose and lily comes into being
rose fragrance wafts over narcissus
man smells of chrysanthemum
when man discards vegetable relations
does he become like a wire
self and self
self and wild rose
self and lover
self and God
self and eternity
Gourmont sticks out his tongue in the curtain
self as a wild rose
lover as a wild rose
eternity as a wild rose


—Translated from the Japanese by Hiroaki Sato

Over the granite
spring has come
in the mountain depths of Jōshū
plum blossoms white
about the 20th of March.
on my way from funeral rites
I hurry toward the capital
the dead person's laughing
born of a rose
behind trumpet lilies
now I can only read Aesop's Fables
except I shouldn't read those sermons
there's the wonderful pastoral tragedy
to the greatness of that nameless
illustrator I consecrate carnations mimosa
freesia violets
here's a man in a triangular hood,
in briefs, wearing
a dagger, fishing,
the costume of which ethnic group is this
neither a Greek nor a Malay
that I should have never
thought about it before
it's a costume for a children's book
by an English illustrator during the Ansei era
harvesting wheat with a sickle like a crescent
and surprising skylarks
a man and a bass talking
a fox and a stork stand talking
vagabonds and travelers loitering
pricked by a thorn in a hedge
bleeding
wasp locus ant water jar
wind sun grapes adder
ancient oak drowning child
a tower looking distorted in the distance

came:
color of hawthorn,
lilac of lilac,
blonde of hair,
the masculine woman

head and arms
missing
the mass of stone, the dent
on its ass, its history
the fluffly bundle of blonde hair
ends in the middle
sticks to the back and remains
the severed Babylonian goddess' lust
thought's emotion
comes from nowhere
comes a pitiful summer
as a bee comes to grape flowers

Under the lacquer-
growing bank
the woodcarver turns his wheel
enshrines a woman the white mountain goddess
and loves the demon's ladle
that grows in the oak's thighs.
The man drinks cheap tea in his office
and keeps skylarks and sparrows
in his house; his summer
by hell time is noon.
This man of sorrows
in the shadow
mottled
like grouse plumage
quietly
carves bowls for
Americans
to pile salads in.
Ladles too.

Until an arrow
stabs the heart,
wheel,
turn quietly.
The tube
that loiters
around the wood spirit
tries to grown wings
and fly away
toward the light on the horizon.
The sound of the Wood Star
tickles the navel
of a tired man
on the bridge.
Man's last laughter
reaches the modern man
walking on the riverbed.
This protruding navel's
last laugh
reaches
both the stone clouded with reed warblers' shit
and the acacia thorns.
The god's lone laugh
boils his last tea
for the disappointed tired man
leaning on the bridge rail.
This god's blessing,
this last joy
of man.