The son of a navy doctor, Nikolai Gumilev was born in Kronstadt, Russia in (under the old calendar) 1886. He published his first poem while still in secondary school, and graduated from the school in Tsarskoe Selo in 1903. It was there that he met the poets Innokenty Annensky and Anna Akhmatova.

He then began his studies at the University of St. Petersburg, publishing his book of verse, Put konkvistadorov (The Path of Conquistadors). 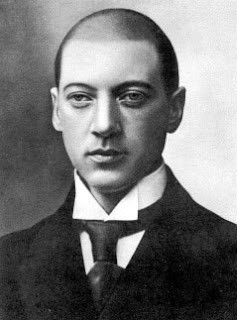 In 1907-1908 Gumilev studied at the Sorbonne in Paris and traveled to Egypt and the Sudan. romanticheski tsvety (Romantic Flowers) appeared the following year. In 1909 he helped to found and edit the literary journal Apollon. He also traveled to Abyssinia.

With his marriage to Akhmatova in 1910, Gumilev founded the Poets' Guild, which was to last until 1914, expressing the anti-symbolist poetics of his own writing, Akhmatova's, and others. The publication of Chuzhoe nebo (Foregin Skies) further articulated his Acmeist concerns: balance, precision, craftsmanship, respect for tradition, restraint and clarity.

Throughout this period Gumilev continued to travel, despite the birth of his son Lev, to Italy, Abyssinia again and Somaliland under the auspices of the Russian Academy of Sciences to study East African tribes. He also continued to translate, most notably the poems of Théophile Gautier.
Kolchan (The Quiver) and Shator (The Tent) appeared in 1916 and 1921, and reiterated his concerns for the artistic personality and his fascination with African culture.

During World War II Gumilev fought in Prussia and Poland and served on the staff of the Russian Expeditionary Corps in Paris. Returning to Russia in 1918, he divorced Akhmatova, publishing his sixth book of poetry, Kostyor (The Pyre) and translating Samuel Coleridge's Rime of the Ancient Mariner.

In 1919 he married Anna Engelhardt, who bore him a daughter, Elena, in 1920. The following year Gumilev, still active as a poet, translator and editor, was arrested for alleged participation in an anti-Soviet conspiracy, for which he was executed in 1921.

Fine the wine that loves us,
Good bread baked for our sakes
And the women who torment and tease
Yet please us and in the end let us take them.

But what do we do with the red
Hue of sunset that lets the sky grow cold
With blue in a still, strange serenity?
What to do with a poetry that lives forever.

You can't eat or drink or even kiss
The color of a setting sun or sound
Of poetic line; even as we wring our hands
And try to grab it quick, beauty flies.

As the boy sometimes watching girls bathing
In a lake forgets what he was playing at
And knowing nothing of love sublime
Is tormented by mysterious desires,

As in the primal jungle of the world where
Some mud covered creature, wet and bare
First felt upon his shoulders wings
Unfurled, and in helpless fear howled

Into dense veldt; so through the centuries—
O God, how long?—under nature's knife
art, the soul cries out
of its pale, trembling flesh—from some sixth sense.


—Translated from the Russian by Douglas Messerli

The Streetcar That Lost Its Way

While walking down a strange street
I suddenly heard the cawing of crows,
Distant thunder, and the tones of a lute —
Here came a streetcar flying past.

How I managed to leap to its step
Is beyond me — even in the bright
Daylight it spewed behind itself
In the atmosphere a trail of fire.

It moved forth like a dark, winged storm,
This streetcar losing itself among
The depths of time — "Conductor, stop!
Conductor, stop this car at once!"

Too late. By now we had already
Rounded the wall, crossed through a grove
Of palms, and thundered across three bridges
Over the Neva, the Nile, the Seine.

Then, his face flashing by outside,
An old bum peered in through the window —
He was, of course, the one who died
In Beirut just a year ago.

Where is this? Answering, my heart
Beats listless yet anxiously:
"Is this the station where you buy
Your way to the India of the Soul?"

A billboard: drawn in blood, the letters
"Grocer's"; here, I know, instead
Of cabbages and rutabagas
One may purchase lifeless heads.

And then the executioner,
In red shirt, with face like an udder,
Chopped off my head: it lay with others
In this slimy box, just at the bottom.

Mashenka, here you lived and sang,
Wove rugs for me, whom you would wed.
Where is your body, the voice that sang?
Is it possible you are dead?

How you wept inside your room,
While I, with powder in my hair,
Went off the present myself to the Empress,
And never beheld you again.

Now I see it all: Our freedom
Is just a small light breaking through
From another world: people and shadows
Loiter by the gate to the planets' zoo.

A lush, familiar wind begins
To blow, and beyond the bridge, the hand
Of a rider in a glove of iron
And two horses’ hooves come flying on.

The great stronghold of Orthodoxy,
St. Isaac's dome, commands the sky.
A prayer of intercession for Mashenka,
Her health; a requiem for me.

But still my heart is always shadowed;
It's hard to breathe; it hurts to live.
Mashenka, I never thought that one could
Have such love, or feel such grief.

—Translated from the Russian by Denis Johnson and
Kathy Lewis

So this is all of life! Whirling, singing.
Oceans, metropolises, deserts,
A desultory reflection
Of what is lost forever.

A flame rages, trumpets trumpet,
And chesnut-colored horses race,
Then the agitating lips
Of happiness, it seems repeat.

And sorrow and joy, now again,
Again, as before, as always,
The ocean gestures a gray mane,
Deserts, cities arise.

But when, at last, arising
From sleep, will I again be me—
Just a simple Indian, dozing
On a hallowed evening, by a stream?

—Translated from the Russian by Denis Johnson and
Kathy Lewis

Right now my love for you is a baby elephant
Born in Berlin or in Paris,
And treading with its cushioned feet
Around the zoo director's house.

Don't cry, my sweet, because it will be put
Into a narrow cage, become a joke for mobs,
When salesman blow cigar smoke into its trunk
To the cackles of their girl friends.

Don't imagine, my dear, that the day will come
When, infuriated, it will snap its chains
And rush along the streets,
Crushing howling people like a bus.

No, may you dream of it at dawn,
Clad in bronze and brocade and ostrich feathers,
Like that magnificent beast which once
Bore Hannibal to trembling Rome.

—Translated from the Russian by Carl R. Proffer

In the old days, when God cast down
His gaze upon the just created earth,
Words stopped the sun,
Words tore down whole towns.

The terror-stricken stars
huddled round the moon
When words, like pink flaming tongues
Floated down through air.

The lower levels of beings,
Like domestic cows yoked
Were given numbers, since numbers
Suggest so many things.

The gray old patriarch who'd brought
All of good and evil under hand,
Was careful not to make a sound,
So drew a number in the sand.

Thus we forget that only words
Stay brilliant in the light
Of everyday adversity. In Saint John
We find words are God himself.

We have limited what they might have meant
By the shallow shell of our lives,
And like bees in a dried-out hive,
left our rotten smelling words behind.

—Translated from the Russian by Douglas Messerli

Posted by Douglas Messerli at 9:59 PM

I am sorry I don't know the names of Your editors,

But there are some mistakes in the text devoted to Nikolay Gumilev.

He studied at the Imperial Nichlolas gymnasium in Tsarkoye Selo from 1903 to 1906.
He met I. Annensky and Akhmatova while studying there, as Annensky was the director of the gymnasium.

I think Your article needs some corrections.
I hope my notes will be helpful to You.