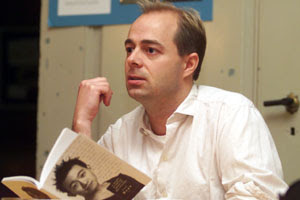 Born on February 25, 1963 in Brædstrup, Denmark, Frank received his education from Aarhus University, and at the age of 22 broke upon the literary scene with his collection of minimalist poetry, Øjeblikket (The Instant, 1985). The following year he published a second volume, Digte I kim (Poems in Embryo). With his third collection, Genfortryllelsen (1988), influenced in part by his translation of John Ashbery, Frank’s text grew longer and his sense of irony increased. Frank received a three year stipend from the Danish Arts Foundation. Since that time, he has also been involved with the famed Copenhagen School of Creative Writing (Forfatterskolen), acting as director from 1996-2001.

In 1996 he published Tabernakel (Tabernacle), in which his poems shifted to a mediatation about poetry’s purpose and function. The work mixed various forms of voices, breaking down metaphors and alternating in tone. As Frank has written: “All metaphor is a breakdown in thought. Metaphor pollutes thought, blends it with its opposite and thus makes it unthinkable. In metaphor there is a conflict between two worlds or two word pictures that compete with each other, they destroy each other, so that from the destruction a third element may grow, constituting an elevation of them both.”

Frank edited the journal Limbo from 1984-1987 and was editor of Den Blå Port from 1990 to 1993. He has written a prose book, Livet I troperne (Life in the Tropics, 1998), a book of essays on the Yucatán and another titled Metaphorisms.