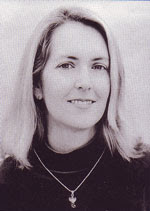 Molly Bendall was born and raised in Richmond, Virginia. She worked in family-run restaurants for much of your youth, but she also trained and performed as a ballet dancer. She received her undergraduate degree from Virginia Intermont College and graduate degrees in English/Creative Writing from the University of Virginia and The Johns Hopkins University. She currently teaches in Los Angeles at the University of Southern California, Loyola Marymount University.

Her first book, After Estrangement, won the Peregrine Smith Poetry prize in 1992. She is also the author of Dark Summer (1999) and Ariadne’s Island (2002), both published by the Miami University Press. She has also published two books of cowgirl poetry, co-authored with the poet Gail Wronsky. Bendall has translated poems of the French surrealist poet Joyce Mansour.

She has received the Eunice Tietjens Prize from Poetry magazine and the Lynda Hull Poetry Award from Denver Quarterly. Her work has twice been chosen for Pushcart Prizes.