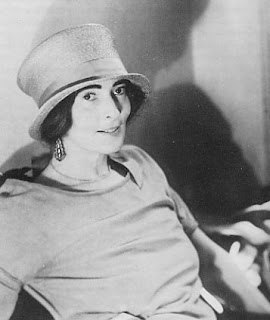 Born in London in 1882, Mina Gertrude Lowy studied art in Munich and in London (where she was taught by Augustus John) before moving to Paris in 1903. In Paris she married Stephen Haweis, and changed her surname to Loy. Her first child, Oda, died on her first birthday.
The same year Loy met Gertrude and Leo Stein, and through Stein's salons, met Apollinaire, Picasso, Rosseau and many others. As her art began to be noticed in Paris, she moved with her husband in 1906 to Florence, during which she suffered from depression and ill-health.
However, Loy continued to produce art and began to flourish under the influence of Mabel Dodge, who have moved to Florence in 1910. In 1913 Loy exhibited paintings in London, and the same year, Stein and Toklas visted Loy in Florence. The same year, Loy's husband sailed to the Fiji Islands, Tahiti, Australia, San Francisco, and New York, and Loy filed for divorce, allying herself with the Italian Futurists.

Over the next few years, despite the declaration of war, and the breaking up of the American/English colony in Florence, Loy remained, having affairs with the Italian Futurist writers F. T. Marinetti and Giovanni Papini. As her writing began to be circulated in the avart-garde circles of New York, Loy grew restless in Italy and began to make plans to go to the United States. Disillusioned with Futurism, she performed anti-Futurist works such as her experimental verse play The Paperers, which exaggerated masculinities. In October of that year, 1916, she sailed, with her two children, for New York.

Loy immediately made a sensation in Greenwich Village and in the avart-garde magazine Others. After she appeared as the wife in Alfred Kreymborg's play Lima Beans (William Carlos Williams was the husband), the New York press "discovered" her. In numerous articles and editorials throughout 1917, Loy was discussed as the paradigm of the modern woman. That same year, she met the Dadaist poet-publisher-pugilist-hoaxer Arthur Cravan; they were married in Mexico City in January 1918. As Loy sailed for Buenos Aires in preparation for their return to Europe, Cravan disappeared, never to be seen again.

Back in Europe Loy began designing lamps and other commercial furniture and returned to the social whirl of Paris literary life. As Robert McAlmon reported about her wit at parties -- and her friendship with Djuna Barnes -- "If only Djuna Barnes or Mina Loy turned up, the evening might be saved." Throughout the next decades Loy worked on her poetic masterwork, Anglo-Mongrels and the Rose.

In 1936 she returned to the United States, forming a lasting friendship with Joseph Cornell and retaining occasional contacts with friends from Europe, including Djuna Barnes, Marcel Duchamp, Alfred Kreymborg, Henry Miller, Man Ray and Mary Reynolds. In 1944 she became a naturalized citizen. She died in September 1966 in Aspen, Colorado.

To some somnambulists
of adolescent thighs
draped
in satirical draperies

A flock of dreams
browse on Necropolis

From the shores
of oval oceans
in the oxidized Orient

Onyx-eyed Odalisques
and ornithologists
observe
the flight
of Eros obsolete

And "Immortality"
mildews. . .
in the museums of the moon

Virgins Plus Curtains Minus Dots

Houses hold virgins
The doors on the chain

Virgins without dots
Stare beyond probability


I Almost Saw God in the Metro

In that state of animated coma
the condition of clochard
this gray-head slumped on a platform bench
like the Emperor of Void
on a throne to which no one pretends
is wrapped in aloofness august
as deity--
an inordinate flower
opening undefiled
among ordure.

Afloat in oval of unclosing eye

a Cinema-Nirvana
shifts
pallid ideograms
and epitaphs of dreams

upon a white slab slanted.

--the dissolved, derouted
traffic of slumber--

as droning day
dilates
in early light
the spectral acre

under the sunless artiface
of this four-cornered sky,

"Lunar Baedeker," "Virgins Plus Curtains Minus Dots," and "Gertrude Stein"
Reprinted from The Lost Lunar Baedeker, selected and edited by Roger L. Conover. Copyright ©1996 by the Estate of Mina Loy. Reprinted by permission of Farrar, Straus, and Giroux.

Posted by Douglas Messerli at 1:15 PM

well, thats a great blog. Really so much impressive and i love that type of post. thank you.