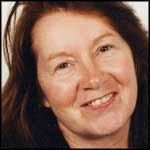 Born in Belfast in 1950, Medbh McGuckian was educated at a Dominican convent before becoming a student at Queen's University, studying with Paul Muldoon and Seamus Heaney, receiving her B.A. in 1972 and her M.A. in 1974. She taught English at a secondary school before returning to the University as a writer in residence in 1985, the first woman appointed to that position.
Her first books of poetry, Portrait of Joanna and Single Ladies: Sixteen Poems were published in 1980, the year she received the Eric Gregory Award. Her first major collection, published by Oxford University Press, was The Flower Master in 1982, followed by Venus and the Rain (1984), and numerous other books. She has edited an anthology of poetry by young people of Northern Ireland, The Big Striped Golfing Umbrella and translated poems by Nuala Ní Dhomhnaill. She has also written a critical study of the poetry of Seamus Heaney.
She was awarded the Rooney prize for Irish Literature in 1982, and received an Ireland Arts Council Award in that same year. In 1989 she won the Cheltenham Prize for her collection On Ballycastle Beach.