Born in Hermanville, Mississippi on May 26th, 1892, Maxwell Bodenheim—whose original name was Bodenheimer—grew up in a family plagued by his father’s business failures. In 1900 the family moved from Mississippi to Chicago, and Bodenheim began writing poetry, rejecting most of his family’s value. He was expelled from high school, and joined the army, going AWOL in 1913, after hitting an anti-Semitic officer over the head with his rifle. He was sentenced to jail, and, when released, returned to his parents. 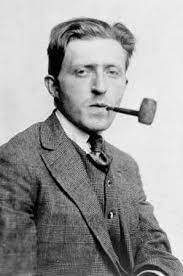 Soon after, Bodenheim began traveling, working part time as a day-laborer. He also worked in a number of part-time jobs in Chicago. In this period, he sent poems to Poetry magazine, and began to be recognized as a writer. At the age of 22, he moved to New York, becoming an editor for Kreymborg’s magazine Others and making friendship with numerous authors such as William Carlos Williams, Djuna Barnes, and Conrad Aiken.

In 1918 he married Minna Schien, with whom he had a son. The same year he published his first book of poetry, Minna and Myself, following it with new collections in 1920, 1922, and 1923. Much of Bodenheim’s time was spent away from his family in Provincetown, working on scripts with Eugene O’Neill. He also became a close friend and collaborator with the noted journalist-writer Ben Hecht, and together they produced the Chicago Literary Times. But the two were incompatible, and they soon parted ways, giving way to a feud that lasted for several years.

In 1923, Bodenheim published his first novel, Blackguard. But it was his third fiction, Replenishing Jessica of 1925 that made him famous. The novel recounts a young woman’s sexual liberation, and Bodenheim was accused of pornography. That accusation brought more attention to the book, and it became a best seller.

During his marriage with Minna, Bodenheim was well-known as a womanizer, and had numerous affairs. He 1938 he divorced Minna, marrying Grace Fiann the following year. By that time, his odd habits returned, including begging for money on the streets of Greenwich village. His wife developed cancer, and died 1950.

Two years later, he married Ruth Fagan, but by that time Bodenheim had truly deteriorated, was badly dressed, unshaven and often slept on empty subway trains and park benches. His wife was mentally unstable, often picking up men for a place to sleep. One such encounter led to a fight between Bodenheim and Ruth’s sexual partner for the night, Harold Weinberg. Weinberg shot Maxwell twice in the chest, killing him, and stabbed Ruth to death.

At the height of his career, Bodenheim had been “the king” of avant-garde, Greenwich Village life. And others were captivated by his personality. Today, however, few readers have read him, and his work has nearly disappeared from memory.

A trickle of dawn insinuated itself

Through the crevices of black satiation.

In remonstrance against the invasion.

Lean with a virginal poison

The glass-blades shook, immune to light and time.

A bird lost in a tree

Shrilly flirted with its energy.

One fool, in the garden, spoke to another.

An old Jew munches an apple

All the thwarted longings of his life

Urge on his determined teeth.

His face is hard and pear-shaped;

His eyes are muddy capitulations;

But his mouth is incongruous.

It is ingenuously haunting

And makes the rest of him a soiled, grey background.

Hopes that lie within their graves

Have spilled their troubled ghosts upon his mouth,

And a tortured, stoical belief

Has dwindled into tenderness upon it….

He trudges off behind his push-cart

And the Ghetto walks away with him.

The pathetic collapse of dirt.

An effervescence of noises

Depends upon cement for its madness.

Electric light is taut and dull,

This kind of heat is the recollection

with each other’s bodies,

Scampering in and out of doorways.

Weighted with apathetic bales of people

The soiled caskets rattle on…

The scene is made of mosaics

A symbol of billowing torment,

Weariness has loosened her face

with its shining cruelties:

Her white cotton waist is a wet skin on her breast:

Her black hat, crisp and delicate,

Does not understand her head.

An old man stoops beside her,

Upon the blunt remnants of his face.

A little black pot of a hat

He watches dead men and women

Spin their miracles of motion

Upon the greyness of a subway-platform.

Pieced together by an old complaint.

tired after many arguments,

Subside upon your rosy face.

You try the simper of a boy

Playing with a toy violin,

As your voice responds to women

You long to escape, but cannot.

The pensive relish of tidbits

Has gradually mastered your life,

And you linger at the deserted table.

Curve upon your sweetheart’s shoulder:

Look up and admire the moon.

Even those who are bolder

Must often sing your tune.

Posted by Douglas Messerli at 3:01 AM

It’s wonderful that you have work of Max Bodenheim on your blog. I am writing his biography, and have been involved with it for a long time. I just want to clarify the photo of the gentleman pouring beer on the floor. The photo was taken in the San Remo bar the day of Bodenheim's funeral after he was murder. The man pouring the beer is Jake Spencer, who was making a toast to Bodenheim and then smashed the glass. Spencer was a famous caricature artist in the Village in the 1940-50s. Many of his drawings are still hanging in the Menetta Tavern, including one he did of Bodenheim. In fact, just lately, if you goggle “Jake Spencer, Life Magazine, Feb. 22, 1954,” you will see the article that I make reference too. Some day, not far off, I will publish the complete and definitive biography of Maxwell Bodenheim
All the best.