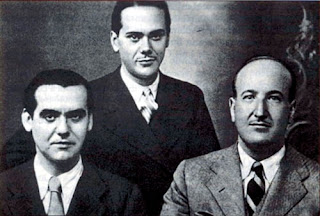 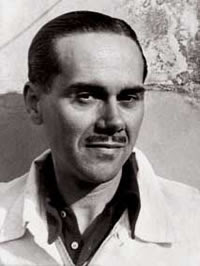 
Born in September 21, 1902 in Seville, Spain, Luis Cernuda was an early member of the Spanish poets of the so-called "Generation of 1927," which included Gabriel García Lorca, Rafael Alberti, Vicente Aleixandre, Jorge Guillén and many others. He began writing poetry as a law student at the University of Madrid.

His first work, Perfil del aire, showed the influence of Pedro Salinas, who had helped him to get the book published, and Cernuda's contemporary Guillén. But it received only a lukewarm reception. But in his next, surrealist-influenced writings, "Un río, un amor" (1929) and "Los placeres prohibidos" (1931) (both collected in La realidad y el deso [1936]), he began to find his true voice, experimenting with incongrous word choices and chance-oriented methods of composition. Other works such as Donde habaite el olvido and Invocaciones continued his exploration of emotional and spiritual autobiographical material, which is at the center of his poems.

Cernuda's open homosexuality and his keen sense of isolation brought on, in part by the Spanish Civil War and his insuing exile in Europe, the United States, and Mexico, which began just prior to the Republican defeat in 1939, focused his poetry on themes of homosexual love and a strong sense of metaphysical pessimism.

Cernuda's major influences were clearly French, but his own concerns, and his readings of English and German Romanticism also had a strong effect on his writing. Accordingly, his poetry often functions as a kind of dialectic, a dialogue between himself as sexual being and a poet of the mind against the background of mythological, historical, and personal associations.

A gray man walks the foggy street.
No one suspects. An empty body,
Empty as plains or sea or wind:
Harsh deserts under unrelenting sky.

It is the past, and now his wings
In shadow meet a pallid force;
thus hesitant remorse, at night,
Brings near its heedless shadow secretly.

Don't take that hand! The prideful ivy
Will rise about the boles of winter.
In calm, the gray lman goes unseen.
Do you not hear the dead? But earth is deaf.

—Translated from the Spanish by Reginald Gibbons
(from Un río, un amour, 1929)


Drama, or a Closed Door

Youth with no escort of clouds,
Walls, that the storms will,
The lamp, outside, like a fan, or in,
With eloquence all declare the obvious:
That which one day weakly gives
Itself over, yes, to death.

Bone crushed by the stone of dreams,
What to do—denied escape—
If not on the bridge that leaps with a flash of light
Between two lies—
The lie of life, or the lie of the flesh?

We know so little!—how to sculpt
Biographies in hostile music;
How to count up affirmations
Or denials, the night's long hair;
How like children to invoke the cold
For fear of going alone into the shadow of time.

—Translated from the Spanish by Reginald Gibbons
(from Un río, un amour, 1929)

He Did Not Speak Words

He did not speak words
Merely drew near
An inquisitive body
Not knowing that desire is a question
Whose answer does not exist
A leaf whose branch does not exist
A world beneath a nonexistent sky.

Anguish makes its way through the bones
Rises up along the veins
Until it breaks the skin
Fountailns of dream made flesh
And questioning the clouds.

A light touch in passing
A quick glance into the shadows
Are enough for the body to split in two,
Greedy to take in
Another dreaming body
Half to half, dream and dream, flesh and flesh,
Alike in form, alike in love, equal in desire.

Even if this were only a wish—
For desire is a question whose answer is unknown.

—Translated from the Spanish by Reginald Gibbons
(from Los placeres prohibidos, 1931)

Passion for passion. Love for love.
I was in a street of ash, lined with huge buildings of sand. I found pleasure there. I looked at him: in his empty eyes there were two tiny clocks; they ran in opposite directions. He held a flower in the corner of his mouth, bitten and broken. The cape on his shoulders was in shreds.
As he passed, some stars began to die, others were being born. I tried to stop him. My arms hung motionless. I wept. I wept so much I could have filled his empty orbits. Then it was dawn.
I understood why a man is called prudent when headless.


—Translated from the Spanish by Reginald Gibbons
(from Los placeres prohibidos, 1931)

In the state of Nevada
Railroad lines have names of birds.
There are fields all of snow
And hours of snow.

Trees embrace trees.
One song kisses another.
Sadness and joy
Ride the lines.


And always snow lies sleeping
On top of more snow, way over there
In Nevada.

—Translated from the Spanish by Erland Anderson
(from La realidad y el deseo, 1936)

One day he figured it out:
His arms were only clouds—
With clouds it is impossible
To clasp a body or a fortune
To the quick.

Fortune is round
And slowly counts the summer stars.
Arms as sure as the wind are needed
And a kiss like the sea.

But with his lips
He can do nothing but speak
Words to the ceiling,
Words to the floor,
And his arms are clouds that turn life
Into a sailing wind.

—Translated from the Spanish by Erland Anderson
(from La realidad y el deseo, 1936)

The way dream
Parts body from soul,
This mist
Separates earth and light:

Everything is blurred and strange;
The silent breeze,
Motionless water
And earth void of color.

Do you know
What that quiet bird
Awaits on its dry twig,
Estranged from itself?

Afar, behind the window
A burning lamp
Makes the hour uncertain.
Life lies

Down, and alone,
Neither living nor dead,
You feel its weak beating
In your body.

You roam these sordid
Outskirts aimlessly
Like the directionless fate
Of man himself.

In your mind, you search
For light or faith,
While outside
Darkness slowly conquers.

—Translated from the Spanish by Reginald Gibbons
(from Como quien espera el alba, 1947)

"Remorse in Black Tie," "Drama, or a Closed Door," "He Did Not Speak Words," "Passion for Passion,"and "Dusk,"
Reprinted from Selected Poems of Luis Cernuda, edited and trans. by Reginald Gibbons (Riverdale-on-Hudson, New York: The Sheep Meadow Press, 1999). Copyright ©1977 and 1999 by Reginald Gibbons. Reprinted by permission of The Sheep Meadow Press.