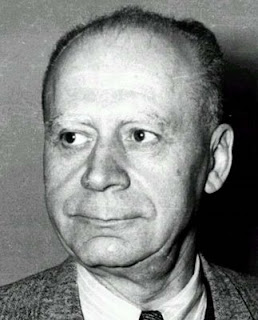 Born in Lancrăm, Transylvania into the family of a Romanian Orthodox priest, Lucian Blaga was educated in German with a philosophical focus, including the teachings of Lessing, Nietzsche and Bergson. After graduating from the seminary, Blaga attended the University of Vienna, studying philosophy and biology.

A year later, in 1919, he published his first collection of poetry, Poemele luminii (Poems of Light), and soon became one of the founders of the journal Gîndirea, which was to become one of the most innovative magazines in Romania before the War. Two years later he published another collection, Pasii profetului (In the Footsteps of the Prophet), followed by dramas and, in 1924, another collection of poetry, În marea trecere (In the Great Passage).

During this same period Blaga began his career as a journalist and diplomat, serving as press attaché in Vienna beginning in 1932 and later as ambassador to Portugal. In 1939 he returned to Romania to become professor of philosophy at the University of Cluj. During this period he became a member of the Romanian Academy and wrote important philosophical writings that would later make up the Trilogia culturii, which, along with Trilogia cunoaşterii and Trilogia valorilor, outlined in which he outlined methods for exploring what he described as "ultimate reality" and a new cultural theory in which he tied culture to the expression of a metaphysics. Late in the 1930s and early 1940s Blaga published his last two collections of poetry, including La curţile dorului (At the Court of Yearning) and Nebănuitele trepte.

Blaga continued publishing and translating the works of Goethe and Schelling until his death in 1961.

This site hosts a large selection of Blaga's poetry in Romanian, with links to numerous other
Romanian poets: http://www.romanianvoice.com/poezii/poeti/blaga.php

A Man Bends over the Edge

I bend over the edge:
is it the sea
or my poor thought?

My soul falls deeply
slipping like a ring
from a finger weakened by fever.
Come, end, sprinkle ash on things.
There is no longer a path.
No longer am I haunted by a call.
Come, end.

I raise myself slightly from the earth
on one elbow
to listen.
Water beats against a shore.
Nothing else, nothing,
nothing.

Heraclitus by the Lake

The paths come together by the green waters.
Silences crowd there, inhuman and abandoned.
Hush, dog, sniffing the wind with your nose!
Don't chase away the memories that come
to bury themselves, crying in their own ashes.

Leaning on a tree stump I try to guess my fate
from the palm of an autumn leaf.
Time, which way do you go
when you take a shortcut?

My steps echo in shadow
like rotten fruit
falling from an unseen tree.
O the stream's voice is sore with age!

Each movement of the hand
is one more doubt.
Sorrows call in the secret
ground below.

I throw thorns into the lake:
I am undone in the ripples.


—Translated from the Romanian by Andrei Codrescu

The Magic Bird
Molded in gold by C. Brancusi


High-signed Orion blesses you
in the sudden wind.
A tear shedding above you
its high and holy geometry.

You lived once on a sea bottom
and circled closely the solar fire.
Your cry sounded from floating forests
over the first waters.

Are you a bird? A traveling bell?
Or a creature, an earless jug perhaps?
A golden song spinning
above our fear of dead riddles?

Living in the dark the tales
you play ghostly reed pipes
to those who drink sleep
from black subterranean poppies.

The light in your green eyes is
phosphorus peeled from old bones.
Listening to wordless revelation
you are lost in flight in celestial grass.

You guess profound mysteries
under the hewn domes of your afternoons.
Soar on endlessly
but do not reveal to us what you see.

Night. The hours turn
without urging.
Be still—clock hands
stop—sighing
on the ultimate sign.

Creatures of sleep
crawl under gates—
red dogs and trouble.
On the streets—tall and thin
the rain walks on stilts.

Old weary wind between walls
shakes dirt and iron gates.
Countrymen from bygone times
flash up a moment and vanish.

The black tower stands its ground
counting the years of defeat.
Be still—the stone saint
just extinguished his halo.

I enter the mountain: a stone gate quietly shuts.
Dream and bridges fly me up.
What violet lakes! What vital time!
The gold fox barks from the ferns.

Holy beasts lick my hands: strange,
under a spell, they stalk with eyes turned within.
Buzzing through the sleep of crystals
the bees of death fly. And the years. The years.

What apparition! Ah, what light!
A white star fell into the garden,

In the high grass, in the wide silk,
it fell from the house of time.

A star came back to our world.
My hands bear its scar.


At the Court of Yearning

Our vigils: flour sifters.
Time passes through—
white dust in our hair.
Rainbows catch fire still:
we wait. We await
the solitary hour
to share in the green
kingdom, the sunlit heaven.

We are still:
wooden spoons forgotten
in the gruel of long days.

We are the guests on the parch
of the new light
at the court of yearning,
neighbors of the sky.

We wait to catch a glimpse
through gold columns
of teh age of fire—
our daughters come out
to crown the doorways with laurel.

Now and then a tear springs up
to bury itself painlessly in the cheek—
who knows what pallid star it feeds?

The tree starts. March echoes.
The bees gather and mix in their combs
awakening, honey, and wax.

Unsure between two borders,
its veins reaching under seven fields,
my tree, my chosen one, sleeps,
dragon of the horizon.

My tree.
The wind shakes it, March echoes.
The powers join together
to relieve it of the weight of its being,
to raise it from sleep, from its divine state.

From the height of the mountain
who sifts to cover it with so much light?

Like tears—the buds overwhelm it.
Sun, sun, why did you wake him?

This is the way it was, the way it will be always.
I wait with my flower of flames in my hand.
Disturbing my greatly exaggerated weeks
the moon powerfully rises.

Up there in the light how fragile the mountain!
The gods' cities crumble in the eyes of children
like old silk.
How holy matter is,
all sound to the ear!


—Translated from the Romanian by Andrei Codrescu