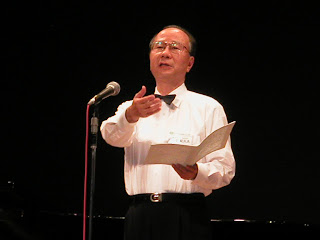 Kusano was born in Nagano in 1903, and at the age of 18 moved to Canton, China. It was there he graduated from Lingnan University, where he learned his English. The stay in China brought a closer relationship to Chinese literature than perhaps for any other Japanese poet, and Kusano drew upon Chinese words throughout his writing career. In 1935, he and friends founded the monthly magazine Rekitei (Historical Process), which grew eventually into a poetry group of over one thousand members.

Kusano became a very popular poet throughout Japan, and Japanese school children all knew his poems about frogs. He was a frequent talk show visitor, and the Royal family often sought him out for occasional poems.