Jules Supervielle was born into a French-Basque family living in Uruguay. Orphaned, he was raised by his uncle, spending his childhood on the pampas, a subject of much of early poetry. At ten he was sent to Paris for his education, and there he attended the Sorbonne for college. 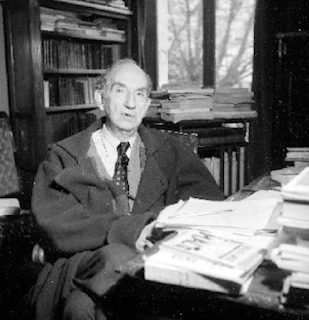 Supervielle is known primarily for his personal and imagistically-rich poetry, beginning with his 1925 volume, Gravitations and continuing through his later volumes including Le Forçat innocent, Les Amis inconnus, La Fable du Monde, Oublieuse Mémoire, Naissances and other books of poetry.

Supervielle was also the author of several works of fiction, Le voleur d'enfants (1926, The Man Who Stole Children) being the most noted of them. He also wrote a pantomime for Jean-Louis Barrault, and scripted nine plays, among which Bolivar formed the basis of the Darius Milhaud opera.

For a reading in French of "Quartre heures," click here:

The whole sky is stained with ink like the fingers of a child.

Under the wood of this table.

What have I done with the ocean,

In what aerial desert did the flying fish die?

I'm sixteen all over the world and on the high mountains,

I'm sixteen on the rivers and around Notre Dame

And in the classroom at Janson-de-Sailly

Where I see time pass on the dial of my palms.

The noise of my heart prevents me from listening to the teacher.

I'm already afraid of life with its hobnailed shoes

And my fear makes me so ashamed that my glance wanders

Into a distance where remorse can't appear.

And is reflected upside down intertwined with rays.

A fly disappears in the sands of the ceiling,

The Latin around us squats and shows us its leprosy─

I don't dare touch another thing on the black wooden table.

I see a young girl facing us like beauty itself,

A young girl sits there, she makes her heart sparkle

Like a jewel full of fever to distant precious stones.

A cloud of boys is gliding toward her lips

Without ever seeming to get closer.

We glimpse her garter, she lives far from pleasures

And her half-naked leg, uneasy, swings back and forth.

Her bosom is so alone in the world that we tremble that she might be cold,

(Is it my voice which is asking if the windows can be shut?)

She would love to love all the boys in the class,

This young girl who has appeared among us

But knowing that she'll die if the teacher discovers her

And be a pretty girl in the midst of adolescents.

And pretends to have more of them than there are stars in the sky.

─Translated from the French by George Bogin

Even if it stops.

It beats solely for itself

from a secret inclination of its own.

Your hands will spread out

from the frozen block

and your brow will be bare

as a great square between

─Translated from the French by Douglas Messerli

Beautiful Monster of the Night

You display a wet snout from outer space

You approach, give me your paw

And pull it back as if seized with doubt.

I am a friend of your dark gestures, nonetheless,

My eyes plumb the depths of your impenetrable coat.

Can't you see me as a brother of the dark

In this world living like ordinary folk, but of the next,

My purest song kept to myself.

With a hasty heart, by patience wornout,

Knocking without an answer on death's doors.

─But every once in a while death replies

When your heart is so scared it beats against its walls,

And you're from a world where they're afraid to die."

Eye to eye, with little steps in retreat,

The monster withdrew into rash shade,

And the sky, as always, studded itself with stars.

─Translated from the French by Douglas Messerli

"Whisper in Agony" and "Beautiful Monster of the Night"

Posted by Douglas Messerli at 1:58 AM