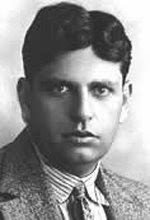 Born in São Paulo in 1890, de Andrade was the son of a wealthy family whose business was in coffee. In 1912 he visted Paris, coming under the influence of F. T. Marinetti's Futurist writings. On his return to Brazil he studied law, and received his degree in 1919. But over these years, he increasingly involved himself the writers and artists, and sought to rebel against the traditions society of Brazilian culture. In 1920, he founded the magazine Papel e tinta, and with other young poets and critics organized the Week of Modern Art in São Paulo in 1922, which is said to have been the beginning of Brazilian modernism.

In 1923, de Andrade published his first important work, the novel Memórias sentimentais de João Miramar (The Sentimental Memoirs of João Miramar), a book written in telegraphic style he had discovered in the Italian Futurists. But the fragmentation of the narrative into brief chapters, the numerous puns and linguistic associations, and the poetic style and diction have caused the book to be compared with the work of James Joyce.

A second trip to Paris solidified his involvement in the avant garde, and in 1925 he published Pau Brasil (Brazilwood), in which he propounded the ideas of "primitive" writing free of the influences of other languages and cultures, and a discarding of meter and rhyme, all of which were to the foundations of the Brazilian modernist movement. In a manifesto of 1928, Anthropological Manifesto, de Andrade furthr developed his aesthetic doctrine, with its emphasis on cannabalism and the native language. In it he continued his advocation of a return to the primitive and an eschewing of European influences.

His second important fiction, Serafim Ponte Grade, was written during the 1930 revolution that brought Getulio Vargas to power, and helped to make de Andrade aware of the brutal realities of Brazilian life. His preface to that book is a angry statement, satirizing some of his modernist friends and denouncing his own participation in the movement. Henceforward, de Andrande refocused his literary activities on social commitment.

De Andrade also published plays such as the 1937 O rei da vela and numerous books of poetry, collected in 1945 Poesias reuidas. He died in 1954, completely out of tune with the modernism he had help to create.

An old Englishman slept with his mouth open
like the blackened mouth of a tunnel beneath civilized
eyeglasses.
Vesuvius awaits eruptive orders from Thomas Cook & Son.
And a woman in yellow informed a sport-shirted individual
that marriage was un unbreakable contract.

The cabarets of São Paulo are remote
As virtues

"I don't give a damn."
"I want to know about the nonsense of waiting with
the revolver on the road."
"That black thug gave her a punch and the woman took
a kick."
"In the belly."
The saxophone persists in an ache of frenzied teeth
Which the maxixe spasms
Between shots and tips
But the open leakage of gas escapes
Into the penitentiary night
"Lord grant us the illumined spongecake of redemption"

The tieté rools heaps of bricks
Water-colored and pink.

—Translated from the Portuguese by Jack E. Tomlins

Cabralism. The civilization of the donées. The Willing and
the Exportation.
The Carnival. The Hinterland and the Slum.
Brazilwood. Barbaric and ours.

The rich ethnic formation. The richness of the vegetation.
The minerals. The food, The vatapá, the gold and the dance.

Against the fatality of the first white man who entered the port
and diplomatically dominated the savage jungles. Citing Virgil to the
Tupíníquím people. The bachelor.

Country of anonymous pains. Of anonymous doctors. Society of erudite
shipwrecked people.
From where the never exportation of poetry. The poetry tangled in the
culture. In the lianas of the versifications.

Twentieth century. A burst in the learning. The men who knew everything
were deformed like rubber babels. They burst free of enclopaedism.

The poetry for the poets. Happines of the ignorance that discovers.
Pedr'Alvares.

The suggestion of Blaise Cendrars:—You have the locomotives full, you leave.
A black man turns the handle of the rotary where you are. The smallest carelessness
will make you leave, in a direction opposite to that of you destiny.

Against cabinetism, the tramping of the climates.

The language without archaisms. Without erudition. Natural and neo-logic. The
millionaire contribution of all of the mistakes.

From naturalism one had passed to domestic pyrography and the the excursionist
kodak.

All the girls talented. Virtuosos of the player paino.
The processions went out the bulge of the factories.
It was necessary to un-do. Deformation through impressionism and
the symbol. The lyricism brand-new. The presentation of the materials.

The coincidence of the first Brazilian construction in the movement of general
reconstruction. Brazilwood poetry.

Against the naturalistic subtlety, the synthesis. Against the copy, the
invention and the surprise.

A persepctive of an order other than visual. The correspondent to the physical miracle in
art. Closed stars in the photographic negatives.

And the wise solar laziness. The prayer. The silent energy. The hospitality.

Barbaric, picturesque and credulous. Brazilwood. The orest and the school. The food, the
minerals and the dance. The vegetation. Brazilwood.

—Translated from the Portuguese by Flavia Vidal

When the Portuguese came
In a heavy rain
He dressed the Indian.
Pity!
If it had been a sunny morning
The Indian would have stripped
The Portuguese.

—Translated from the Portuguese by Régis Bonvicino and Douglas Messerli

I am round, round
Round, round I know
I am a round island
Of the women I have kissed

Because I died for oh! love
Of the women of my island
My skull will laugh ha ha ha
Thinking of the roundel

—Translated from the Portuguese by Jean R. Longland


Ballad of the Esplanade Hotel

—Translated from the Portuguese by Thomas Colchie

Four hundred years ago
you landed in the Tropic of Capricorn
on the carbuncular plank
of ships
steered by dark stars
the pale beetle
of the seas
Every exile was a king
skinny, insomniac, colorless
as clay

You will create a world
from coarse laughter
from sterile glues
from coarse laughter
You will plant insurgent hatreds side by side
frustrated hatreds
You will invoke humanity, mist and frost
Among the lianas you will build a palace of termites
and from a tower circled by hills
bleating with sincere cincerre-bells
you will rise toward the moon
like hope

Space is a prison.

—Translated from the Portuguese by Flavia Vidal

"from Sentimental Memoirs of João Miramar"

Cannibal Manifesto
by Oswaldo de Andrade
translated from the Portuguese by Mary Ann Caws and Claudia Caliman
Translators' Links
Cannibalism: An Introduction to Oswaldo de Andrade’s “Cannibal Manifesto”
The starting date for the Brazilian modernist movement, which advocated a return to the soil, is usually given as 1922, when the major impulse was given by the Week of Modern Art. This revolutionary approach was announced by a woman painter, Anita Malfatti, “the protomartyr of modernism,” whose forward-looking paintings in her second exhibition, in 1917, were derided by Monteiro Lobato (He claimed that she simply contributed her own “-ism” in her paintings where a horse and rider fall over: “I call this genre topple-ism”). But he himself had a great influence on Brazilian modernism’s most celebrated text, Oswald de Andrade’s “Cannibal Manifesto” of 1928. Also called the “Brazilwood Manifesto,” because it champions the use of native material and turns against artifice, this manifesto takes its name from the cannibalistic Tupi Indians of Brazil who disposed gastronomically of an unloved Bishop. It is outrageously satirical, reading in part: “Only cannibalism unites us... Tupi or not tupi, that is the question.” The manifesto shares the title of a Dada publication of two issues, Cannibale, whose lively primitivistic spirit is joined to the Russian Rayonists, with their Why-We-Paint-Our-Faces manifesto against the sophisticated and over-civilized society. Andrade’s preface to Seraphim Ponte Grande is another modernist manifesto that repudiates Modernism: “The Modernist Movement, culminating in anthropophagous measles, seemed to indicate an advanced phenomenon.” Elsewhere, he distinguishes between the two: “Simultaneity is the coexistence of things and events at a given moment. Polyphony is the simultaneous artistic union of two or more melodies which have the fleeting effect of clashing sounds as they contribute to a total final effect."

Reprinted by permission of Mary Ann Caws.
Posted by Douglas Messerli at 9:53 AM