José Lezama Lima (Cuba)
1910-1976
Lezama Lima studied law, as well as theology and history, at the University of Havana, and was active in the early protests against the dictatorship. He began publishing poetry in the 1930s, and in 1937 he founded the journal Verbum, which became the major organ for the Transcendentalist group of poets.
The Transcendentalist's wanted to take poetry to to a higher spiritual level in reaction to the costumbrista tradition, which stressed regional literary sources.
Lezama Lima later was one of the founders of Orígenes, which was one of the most highly influential journals of the mid 1940s and early 1950s. 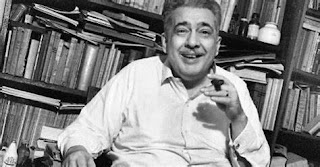 His own work became better known when he published his prose poems of the early 1940s, published in Nadie Parecía, which were later collected as La fifeza, published in 1949. Dador followed in 1960, and his Anthology of Cuban Poetry, one of the most influential of anthologies followed in 1965.

An Obscure Meadow Lures Me

An obscure meadow lures me,

revolve in me, sleep on my balcony.

They rule her beaches, her indefinite

On the waters of a mirror,

I slowly enter the meadow,

proudly consumed in a new labyrinth.

baring their sky, their silent sunflower.

Strange the surprise in that sky

and voices swell in its pregnant center.

An obscure meadow goes by.

Between the two, wind or thin paper,

the wind, the wounded wind of this death,

this magic death, one and dismissed.

A bird, another bird, no longer trembles.

Posted by Douglas Messerli at 1:39 AM