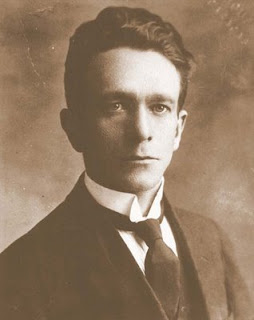 José Antonio Ramos Sucre [Venezuela]
1890-1930
José Antonio Ramos Sucre was born to an aristocratic family in the port city of Cumaná, in the state of Sucre. He was a direct descendant of the revolutionary Antonio José de Sucre, one of the founding fathers of Venezuelan independence. From a young age he stood out as an exceptionally gifted student. In 1910 he moved to Caracas to study Law at the Universidad Central de Venezuela.
In 1917 he received his Law degree although he never practiced that profession. From his university days onwards, he worked as a high school teacher of History, Geography, Latin and Greek. He also worked as a translator and interpreter for the Venezuelan State Department. It was during his time as a university student that Ramos Sucre began to publish essays and poems in various Caracas newspapers and magazines. He gained a reputation as a brilliant scholar among his friends, acquaintances and students. Throughout these years in Caracas he taught himself several languages and was an omnivorous reader, often ordering books of literature, philosophy, history and mythology directly from European booksellers.
It was in Caracas that the legend now surrounding Ramos Sucre began to take shape. His texts appeared frequently in newspapers and magazines and were unlike anything else being published at the time. Various critics and fellow poets referred to them as prose poems, although that category has never been able to encompass the flexibility and uniqueness of his writing. He suffered from anxiety, depression and an insomnia that would torment him mercilessly throughout most his short life. The poet Fernando Paz Castillo (1893-1981) recalled how he would sometimes accompany his former teacher during his nightly walks throughout Caracas, one of the means he used to combat his insomnia. Paz Castillo remembered that Ramos Sucre once confided to him: “This insomnia will end up killing me.”
Ramos Sucre self published all four of his books, beginning with the compilation of articles, aphorisms and prose poems called Trizas de papel [Paper Shreds] in 1921. Although that book received no reviews, his subsequent publications were noticed by a small but influential group of readers. Yet Ramos Sucre always seemed to live in a dimension all his own, even though he could be seen walking throughout Caracas or gathering with other intellectuals in Plaza Bolívar, the city’s central square. The poet Juan Sánchez Peláez (1922-2003), for instance, recalled seeing Ramos Sucre sitting in Plaza Bolívar once, as he walked through there with his parents.
At the end of 1929, Ramos Sucre published his two final books and moved to Europe, where he had been offered a job at the Venezuelan consulate in Geneva. His last months in Europe were torturous, however, as the insomnia and anxiety that had plagued him for so many years began to tax his mind and body. He spent time at sanatoriums in Hamburg and Northern Italy in an attempt to cure his insomnia, but these therapies were unsuccessful. On March 18th he attempted suicide but eventually awakened from an overdose of barbiturates. On June 9th he turned 40 and upon returning home from work ingested another overdose of drugs. He died on June 13th. His remains arrived in Venezuela on July 17th and he was buried in Cumaná a few days later.
-Guillermo Parra
BOOKS OF POETRY
Trizas de papel (1921); La Torre de Timón (1925); El cielo de esmalte (1929); Las formas del fuego (1929).

Ramos Sucre, A Character from His Own Work?
Ramos Sucre is a creator of myths, who has become finally, in person, a myth. A creator to whom people have wanted to attribute the lives of his characters, as though poetry could become reality outside of fiction and get mixed up with the author’s life merely because people make the latter material for literary speculation. When what is really of concern is the text.
I am of the opinion that dramatizes the “heartrending tones” of his poetics, although I don’t deny that the gloom we find in his poems is autobiographical by nature, which somehow explains how the poet’s suffering, registered in his texts, would have led him to suicide when he was forty. But
I think, as Michaux did, that one writes for the sake of health. The game and the pleasure that writing satisfies compensate in the poet’s case for the pain and bitterness of life, although they don’t substitute them; that’s why I don’t think Ramos Sucre required a confessional need to reach a heartrending tone, since that tone actually corresponds to an aesthetic feeling paired alongside the way, formally speaking, the poet knew how to attribute greater poetic efficiency.
The suffering of Ramos Sucre is that of someone who experiences evil as much as he is a victim of it. But it is also someone who experiences pain as an awareness of the world.
The poet is in the world because of evil. He is excluded from it by suffering. He is provisionally captured by love (while alive).
– Translated from the Spanish by Guillermo Parra
The City
I used to live in an unhappy city, divided by a slow river, pointed towards infinity. Still trees on the banks robbed the sun of a difficult sky.
I would await the end of a wasted day, interrupted by the sounds of the squall. I would leave my house turned aside in search of the afternoon & its sights.
The declining sun painted the city of offended ruins.
Birds flew above to rest further on.
I felt strangled by life. The ghost of a woman, the height of bitterness, followed me with unmistakable steps, a sleepwalker.
The sea frightened my withdrawal, undermining the earth in the secret of night. A breeze confused the trees, blinded the bushes, finished in a tired flower.
The city, worn by time & greeted by a bend in the continent, kept common custom. It told of water vendors & beggars versed in proverbs & advice.
The wisest of them insisted upon my attention by referring to the likeness of a Hindu fable. He succeeded in speeding the course of my thoughts, returning me to my memory.
The hour before dawn my fever vanished, cutting loose the madness of a scattered dream.
–Translated from the Spanish by Cedar Sigo & Sara Bilandzija
(from La Torre de Timón, 1925)

Life of the Damned
I suffer from illustrious decline; I love pain, beauty & cruelty, above all the last which destroys a world abandoned to evil. I always imagine further pain, live wounds.
I saved the hard parts of childhood, the withered faces of my grandparents who died in this spacious house after a long illness. I recreate the scene of their burials which I witnessed pure & shocked.
Since then, mine is a critical unholy soul living on the battleground of human & godly powers, driven by a mania of questions. This insatiable curiosity brought academic triumph then a fleeting & corrupt life upon leaving the classroom. I hate especially my fellow men who inspire a fascist word within me. I confess that in the bored days of my youth my discordant & private nature resulted in drag out fights & drew forth a wit from the loosest women who frequent buildings of danger & deviation.
Unseduced by worldly pleasures, I returned by chance to solitude, much before the end of my youth. I withdrew to my native city, removed from progress, among the dead. Since then I have not left this mansion’s shadow. Behind the house flows a thin river of ink, saved from the light by a spot of trees, torn by a furious wind, born of the driest mountain. An oxen cart passes slowly across the deserted road in front of the house, in imitation of an Etruscan country scene.
Curiosity misled me into an unfortunate marriage. I married a young woman whose body mirrored mine, save for one unique improvement. I treated her with scorn, loved her as I would a collapsible doll. I soon became bored with the childish, often bothersome creature & decided to just kill her in order to learn more.
I directed her towards an empty ditch in the yard of our home. I carried an iron block in my hand & used it to club her once above the ear. The girl fell upon her knees in the hole, shrieking weakly, such an idiot. I covered her with dirt & that night sat alone at the table toasting her absence.
That night and many others that followed a sudden brilliance illuminated my bedroom, banishing any thought of sleep. I began to lose my strength, became thin & pale. To distract myself I rode away on horseback towards the outskirts of the city through blank countryside. I would rest beneath the same ancient tree, the right sort of place to meet with your mistress. During these rests I could hear scattered & confused murmurs, incapable of true articulation. For days I stayed beneath the tree, my reason became blinded – a nervous breakdown. I awoke nailed to this round chair in the care of my loyal servant who defended me when I was young.
I pass the time in anxious silence, the bottom half of my body covered in a wide blanket. I wish to die & seek dark suggestions, next to me a candelabra (from the attic) is burning.
It is there that the spectre of my woman returns to visit. She walks toward me, vengeful hands in the air, my servant is cornered in fear. But I will not abandon this mansion until I succumb to the bitter ghost. I want to escape mankind even after death & have ordered this mansion destroyed the day after I die, in a tornado of fire together with my body.
– Translated from the Spanish by Cedar Sigo & Sara Bilandzija

The Beloved
The beautiful girl holds a vigil and defends my life from within an orbital temple, circular with its seven columns.
Her imperious voice descends, because of me, to the modulations of song.
I emerged comforted by her presence, carrying a branch of cedar by her decree.
I descended a mountainous trail to the ocean shore, where my barque balanced itself.
The canticle kept sounding, ascendant and magnificent. It paralyzed nature in its course. It inspired me to save the zone from the squall.
The sun stood still, for hours on end, peeking over the line of the horizon.
–Translated from the Spanish by Guillermo Parra
(from Las formas del fuego, 1929)

Misplacement
I have followed the steps of a pensive woman. I was seduced by the black eyes and the strange whiteness of the face.
An illness had made me lose interest in life.
I wandered through a series of streets shorn of stones and immersed in darkness. I indolently gave myself over to danger.
I have reached the suburb of her home. The moon fascinates me imperiously.
I have witnessed the parade and gathering of ambiguous figures. They all displayed the pensive woman’s profile and surrounded me, forming a chorus of threats and lamentations.
I went back to the city’s central square, leaning on a night watchman’s arm. Despite the late hour, I visited the room where I was accepted in good standing. The windows leaked a profuse light onto the street.
Wordlessly, I incorporated myself to the discourse of the incredulous priests.
–Translated from the Spanish by Guillermo Parra
(from Las formas del fuego, 1929)
Posted by Douglas Messerli at 7:37 AM

Very nice poems! Like to much...thanks for presenting them! Have a wonderful new year!

Thank you for publishing these poems in English!