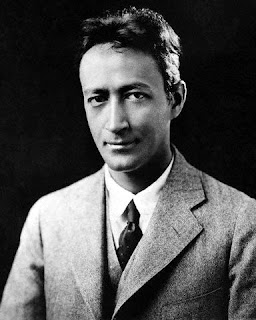 Nathan Eugene Toomer was born in Washington, D.C. in a family was of racially mixed blood. His grandfather on his mother’s side was Louisiana politician P. B. S. Pinchback, who grounded his Reconstruction career on an insistence that he was black. In any event, the young Toomer, growing up in an affluent suburb of Washington, was fair skinned, and identified with what he described as a “fusion” of the racial intermingling. Toomer’s father left his mother in 1895, and in 1905 he and his mother moved to New Rochelle and Brooklyn, New York, settling with her white second husband. Upon her death in 1909, Toomer returned to his maternal grandparents, who now lived in a black neighborhood of the city. He attended a black high school.

In 1914 he began at the University of Wisconsin in Madison, determining to major in agriculture. But psychologically, he was not fit for the university, and left after one year, eventually enrolling in other universities but never obtaining a degree. In 1919, at City College of New York, he settled upon being a writer, changing his first name to Jean. His major influences during those years were the bohemian figures of Greenwich Village, particularly the novelist and critic Waldo Frank.

Over the next two years he divided his time between Washington and New York, reading a wide range of literature and writing stories, poems, review, essays and other work. This would be a time of heady experimentation, and most of his works from this period have been characterized by at least one of his anthologizers as “The Aesthetic Period” of his career. He experimented with poems that imitated Imagist work, sound poems, and, in at least one instance—in “Banking Coal”—explored imagery and a voice that came close to that of Robert Frost.

In mid-1921 Toomer accepted an offer to become principal of a black school in Sparta, Georgia. During that period Toomer came to understand his racial roots and came to recognize himself in the folk-songs and accents of rural black America. The result of this, was a new sensibility, expressed in his 1923 in his work Cane, almost a document of his lyrical experience in the South. Freely mixing poetic prose, narrative, and poems broken into lines, Cane reminds one, in some senses, of the experiment, Spring and All, published the same year by William Carlos Williams. But in the work’s free expression of African American forms such as spirituals and work songs, it became one of the most influential documents for the flowering of black writers and artists of the 1920s-1930s that would come to be described as the Harlem Renaissance.

After this period, however, Toomer did not continue with the expression of black culture, but came under the influence of the Russian founder of “Unitism,” Georgei Gurdjieff, who combined elements from philosophy, psychology, dance and eastern religious ideas. In 1924 Toomer began teaching Gurdjieff’s methods in New York and, later, in Chicago; his poetry also became infused with Gurdjieff’s ideas, continuing in that mode even after his break with the guru in 1934.

Toomer had married Margery Latimer in 1931, but after her death in childbirth, he remarried, settling into a domestic life on a farm in Pennsylvania. He continued writing until his death in 1967.

Cane (New York: Boni and Liveright, 1923); The Collected Poems of Jean Toomer, ed. by Robert B. Jones and Margery Toomer Latimer (Chapel Hill: The University of North Carolina Press, 1988)
Posted by Douglas Messerli at 8:16 AM