Jayanta Mahapatra was born in Cuttack, India, and has spent most of his life in Orissa, where he lives. Raised among poor people, Mahapatra's life often portrays everyday events in contemporary India, and his work champions those who live in a world of hunger, grief, and injustice. 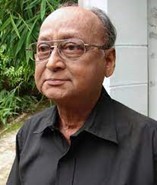 He attended Ravenshaw College and the Science College at Patna before coming a sub-editor at the Eastern Times. He also edited the magazine, Chandrabhaga.

In later years he lectured on physics and other scientific subjects throughout India, and as his poetry became more known, was invited to be a visiting writer at the then-famed University of Iowa International Writer's Program. For his books of poetry, which include A Rain of Rites (1976), Waiting (1979), The False Start (1980), Relationship (1980), Dispossessed Nests (1986), and Selected Poems (1987), he has won several awards, the Bisuva Milana Award for Poetry and the Jacob Glatstein Memorial Prize among them.

Mahapatra has also written sever books of prose, including The Green Gardener (1997), a book of short stories and Door of Paper: Essay and Memoirs (2006).

BOOKS OF POETRY (in English)

BOOKS OF POETRY (in Odia)

Go here for a poem:


Posted by Douglas Messerli at 2:00 AM